THE DEMOCRATIC TAKEOVER OF BOISE CONTINUES 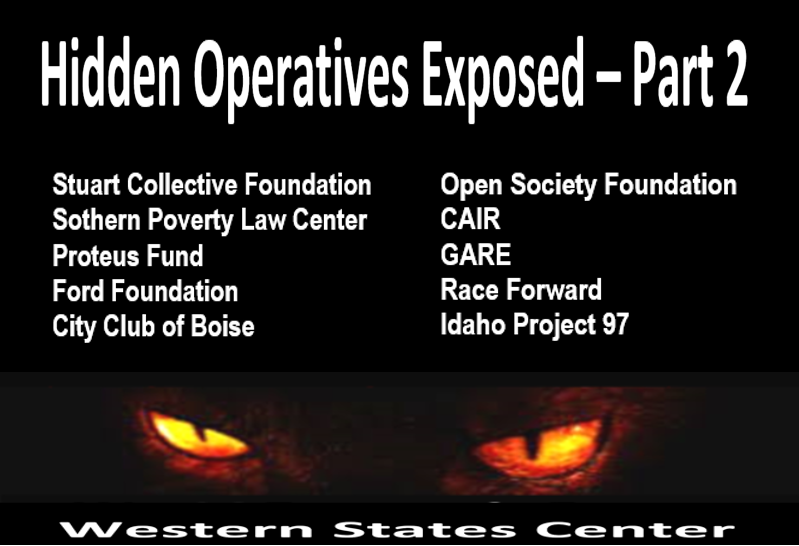 THE DEMOCRATIC TAKEOVER OF BOISE CONTINUES

In a previous article the relationship between the Western States Center (WSC) and Jim Jones, founder of the Take Back Idaho (TBI) group, was exposed.  While the relationship between WSC members and other groups was touched upon, the extensive range of those relationships is disturbing.  WSC is clearly part of a terrorist network of groups who are systematically targeting local governments for the purposes of radically changing how our Republic was originally intended to work.

Terrorists operated differently in the late 1960’s and 1970’s through the use of violence.  There is no distinction between these groups as far as being left or right wing, or based on race.  They are just groups on violence.  However, a new tactical approach has been adopted, changing to non-violence.  Strategically, these groups are now using influence within government jurisdictions to spread division and transform the direction of that government.  Such is the case of the Boise City Council.  WSC has integrated itself into this local level of government to influence the direction of the city with specific political goals. 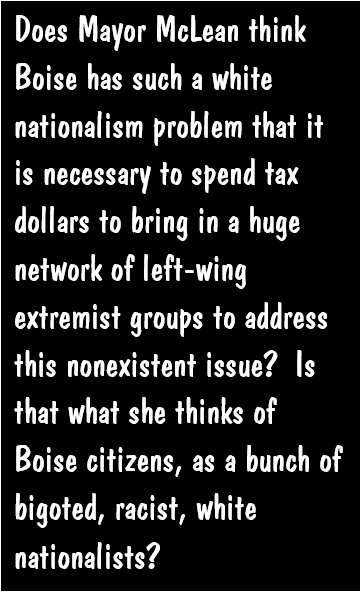 Terrorism has been traditionally associated with violence, or “The use of violence or the threat of violence, especially against civilians, in the pursuit of political goals.”  But what if a group chose to not use violence, instead using a non-violent form of terrorism to achieve its pursuit of political goals?  Other issues such as financial can be used as a form of terrorism.  Another WSC partner, the Council on American-Islamic Relations (CAIR), not only inspires terrorism but is also historically linked to terrorism. While WSC makes the claim that white nationalists are threatening the foundation of democracy and “committed to seizing the power of the state,” isn’t WSC actually the one doing this by infiltrating governments in partnership with groups that are intent on dismantling our government foundation?

Previously it was noted that Eric Ward, WSC Executive Director, is a member of several left wing organizations.  Race Forward is connected to several other groups such as Government Alliance on Race & Equity (GARE) in which Idaho is a particular target for infiltration.

As Chair of the Proteus Fund he is able to procure funding for social justice causes.  This group has even wealthier partners to aid the effort, including the George Soros Open Society Foundations in which Mr. Ward has been a consultant.  “Proteus has also developed strategies for persuading voters to tip the scale of public opinion in specific states and localities.”  Now this is being advanced in Boise through Mayor McLean.  He was also previous Ford Foundation Program Officer, which has many causes that it funds, and includes influencing governments. 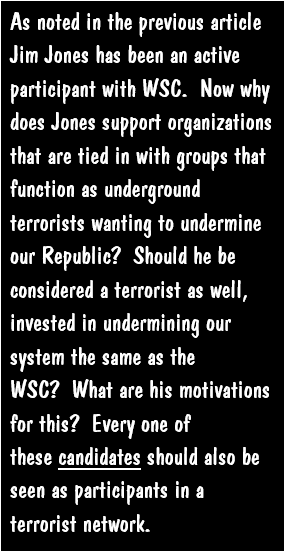 Interestingly, as much rhetoric as Mr. Ward spews about white nationalism, there is also black nationalism which he seems to ignore.  Apparently, the FBI took some heat for “piecing a few incidents together to construct a movement” by black nationalists.  Now isn’t that what WSC is doing, taking a few isolated incidents of idiots spreading hate and blowing it way out of proportion and using it to justify bringing in its propaganda?  Even the individual in the recent New York subway attack has been identified as a black nationalist.  Where is Mr. Ward speaking to this?

In further emails obtained by Casey Whalen via a Boise City Council Freedom of Information Act (FOIA) request, Boise has been identified by the WSC as a place to initiate its “pilot project” with the Southern Poverty Law Center (SPLC), in which the Federal Bureau of Investigation (FBI) has ties.  WSC has also brought in two more operatives for this project, Ben Unger and Ethan Krow.  Unger has an extensive background in politics and Krow works for Stuart Collective.

Stuart Collective “specializes in working with diverse, progressive PACs, organizations, and individuals to create change on bold statewide campaigns and legislation that have the potential to create massively positive political change.”  Its mission is “to connect, advise, and mentor people and organizations serious about creating radically positive political change.”  Besides WSC other partners include the SPLC, Service Employees International Union (SEIU), Portland Public Schools (PPS), Senate Democratic Leadership Fund (SDLF), and Kate Our Governor referring to Kate Brown.  This organization is being brought in to influence campaigns and legislation and Senior Strategist Ethan Krow will lead the way.

Ben Unger has an extensive political background as former Oregon legislator, lobbyist, and co-founder of The Lab Strategies which is a “campaign and advocacy consulting firm” in which WSC just happens to be a client.

However, there is also a tie in with local left-wing extremist groups.  In the August 2, 2019 email list is Michael Satz.  He is a City Club of Boise board member, at which Jim Jones has spoken, and is also the founding executive director for Idaho Project 97.  These two organizations endorse ideology that is the same as WSC and Jim Jones, such as opposition to the Idaho Freedom Foundation (IFF) and targeting legislators.  The City Club of Boise also has corporate strength behind it that includes press manipulation through the Idaho Statesman, Idaho Public Television, and universities.

Does Mayor McLean think Boise has such a white nationalism problem that it is necessary to spend tax dollars to bring in a huge network of left-wing extremist groups to address this nonexistent issue?  Is that what she thinks of Boise citizens, as a bunch of bigoted, racist, white nationalists?

On December 14, 2021 it was confirmed that Mayor McLean would be meeting with Ben Unger on December 17 to coordinate on this WSC/SPLC pilot project.  In partnership with the WSC Boise Mayor McLean is bringing in a network of organizations whose sole purpose is influencing not only campaigns but elections as well, a clear undermining of how our government is operates through elected representation.  Or is it that the majority of Boise voters want this type of progressive change?

So here we have an organization that clearly has ties to other non-violent terrorist groups with a massive amount of funding behind them in order to infiltrate and influence political entities and persuade them to adopt and implement its specific political goals, while also using local left-wing extremist groups.  That is how it is done now and the whole concept of representation is destroyed.  None of these involved individuals or organizations hold any commitment to either the U.S. Constitution or the Idaho Constitution.

As noted in the previous article Jim Jones has been an active participant with WSC.  Now why does Jones support organizations that are tied in with groups that function as underground terrorists wanting to undermine our Republic?  Should he be considered a terrorist as well, invested in undermining our system the same as the WSC?  What are his motivations for this?  Every one of these candidates should also be seen as participants in a terrorist network.

If this all sounds like dramatization, take one moment to consider the objectives of these organizations.  Terrorists or terrorist groups have specific political goals.  These groups want a democracy (mob rule) not a Republic.  And they are winning.  Face it, what other Idaho organizations are this well connected or have the amount of money and corporations backing them?  Issues of white nationalism, candidate inadequacies, or right-wing extremist organizations are only fronts for the real goal of undermining our government.  That is the goal. Representation no longer exists, it is now just a majority of ideological fools who dominate the legislature, local governments, along with the media to promote it.  The majority of Idahoans do not support any of this ideology, or do they?

Idahoans are seen as illiterate, country bumpkins who aren’t capable of making intelligent decisions by these groups but can rather be led around by the muzzle and told what to do and how to think using psychological manipulation of shame and guilt.  They all party together, slap each other on the back with adulation, and laugh at us.  Until Idahoans start fighting back using constitutional foundations they will continue to win.

Other important articles by Karen Schumacher: