Racism Is A Public Health Crisis 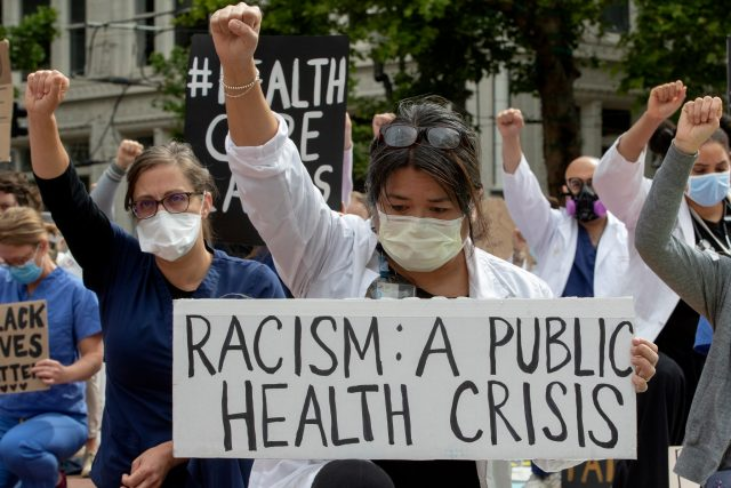 Racism Is A Public Health Crisis

Very recently there has been a massive push towards creating the myth, or what is really a theory without any scientific proof, that racism is a public health crisis, and if not already in your city or county, may be coming to your local government soon with a resolution to adopt it.  It is Critical Race Theory (CRT) on steroids.

Several Democratic Senators have reintroduced a resolution, S.Res. 172, Declaring Racism A Public Health Crisis, with the House of Representatives creating companion legislation.  Somehow, a virus has accelerated racial disparities that pervade public health which is a direct result of systemic racism.  Say what?  Included groups are Blacks, Latinos, Alaska Natives and American Indians with higher infection, hospitalization, and mortality rates.  This is described as “racial disparities”, as explained by the National Center for Health Statistics and Center for Disease Control, expanding the general idea that all matters related to health have been racist.  A resolution on this matter will chart “a path to greater equity in health care.”

However, the resolution itself goes far beyond just the above identified groups, including LGBTQIA, Pacific Islanders, and Asians.  “Health” encompasses everything including certain states not providing Medicaid CHIP funding to lawfully residing immigrant children; inequality in mental health, foster care placements, and welfare numbers; discriminatory housing; toxic waste exposure and poor air quality; access to healthy food, safe water, and neighborhoods; education, transportation, and job security; disproportionate impacts by the criminal justice and immigration enforcement systems; and police brutality and death by police.  Public health is used as the catch phrase that includes every aspect over our lives and is why so many topics are included in the resolution.  But it also provides the excuse to completely overall us and society for the sake of racial equity.

Now here is an offensive statement, the resolution declares “that the United States stands firmly in honoring its moral purpose of advancing the self-evident truths that all people are created equal, that they are endowed with certain unalienable rights, and that among these are life, liberty, and the pursuit of happiness.”  Not mentioned is that it is not the job of the government, through its limited enumerated powers, to take over and control every aspect of our lives.  What a distortion.

Efforts to get the ball rolling on this have already started with the U.S. Department of Education (USDOE).  On the Federal Register is a proposal for an American History and Civics Education program in grants with a comment period that ends 5/19/21.  While the proposal claims it is intended to educate students about the history and principles of the Constitution and Bill of Rights, and traditional American history, Priority 1 quickly outlines the real intent is addressing systemic racism and urgency to improve “racial equity” in society.  Citing Ibram X. Kendi, who has declared “we must fight discrimination with discrimination, and that it’s racist to disagree”, the proposal states “schools across the country are working to incorporate anti-racist practices into teaching and learning”.  Kendi has even written a book on CRT for babies.

Since this is a proposal for grants, applicants applying for a proposed project must incorporate teaching and learning practices that “take into account systemic marginalization, biases, inequities, and discriminatory policy”, and incorporate racial, ethnic, and cultural perspectives.  Students must also be taught how to understand “their own bias.”  Rather boldly, the proposal also requires students “Understanding how inaccurate information may be used to manipulate individuals, and developing strategies to recognize accurate and inaccurate information.”  If there were ever a pot calling the kettle black this would be it.

Although this  report by Dan Titus, Racism &Health Equity: Subsidizing Minority and Undocumented Populations, is primarily about California, it provides deep insight into what should be scrutinized in local governments and public health departments.  Racism public health resolutions have shown up in cities such as Ohio, Utah, Virginia, and Minnesota.  So far, no cities in Idaho have been identified as adopting this type of resolution, however a vigilant eye must be kept on the way in which city planning and public health departments are directed.  Starting on page 37 the report has suggestions on what to look for and starting on page 40 are critical questions that should be asked of local officials if such a resolution should be proposed.  His report shows how easily this impacts the local level and how to challenge it in your local city or county.

For Idaho, the most critical issue coming up is S1193, to be voted on when the legislature reconvenes on May 12th.  This six-million-dollar federal grant, if authorized, would be given to a non-profit for expanding early childhood learning centers, with another six million per year for two more years.  If the USDOE grant proposal is approved, it means that the future grants would include the requirement to integrate critical race theory into its work.  While the non-profit, Idaho Association for Education of Young Children (IAEYC) claims it does not include this in its work, it would be required with future grants.  It is critical that this bill is defeated in the House.

This Imprimis article on critical race theory explains its origin and how it has been implemented in our education system.  Idaho cannot let our youngest children be exposed to this indoctrination.

As Idahoans continue to sleep, these issues are marching on rapidly, advancing the destruction of our nation.  How much longer will it take for Idahoans to realize what is being done?  It is time for citizens at a local level to organize and challenge all public officials with any decision that destroys our Republic, and demand no participation in any federal program or direction that advances that destruction, regardless of how much money is dangled in their face.  If the agenda continues, it is only our fault.  At issue is using racism in the public health system as the driver of change in all aspects of our lives, and that is the goal, redefining life and liberty into one that is defined and controlled.