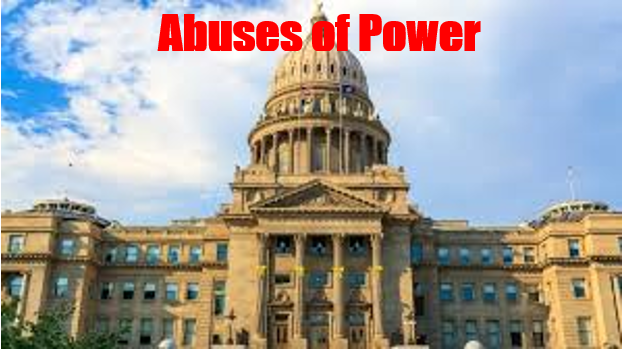 Idaho citizens must start addressing the multiple abuses of our Republic by Idaho government that have resulted in the loss of Idaho and citizen sovereignty.  The federal government has exceeded its enumerated powers through legislative and other actions and Idaho elected officials have allowed this intrusion into our state.  In addition, elected officials have not ensured that Idaho laws have been tested in accordance with the Idaho Constitution. 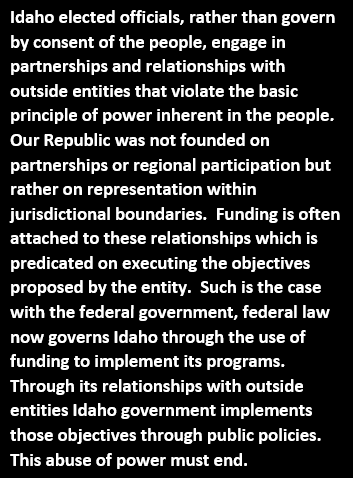 As stated in the Declaration of Independence, “But when a long Train of Abuses and Usurpations, pursuing invariable the same Object, evinces a Design to reduce them under absolute Despotism, it is their Right, it is their Duty, to throw off such Government, and to provide new Guards for their future Security.”

Idahoans believe the federal and Idaho governments are on the threshold of despotism and that the Consent of the Governed has been abandoned.  It is not the intent to abolish the government, but rather restore Idaho government back to its Constitutional principles and in doing so regain Idaho sovereignty.

Elected officials in Idaho have long neglected to uphold their sworn oath and duty in allegiance to the Idaho Constitution.  In doing so the rights of Idaho citizens have been violated, usurped, and the Consent of the Governed continually rejected.

Examples of these abuses include Idaho statutes that are not faithful to Article I in the Idaho Constitution.  Article I Section 2 states, “POLITICAL POWER INHERENT IN THE PEOPLE. All political power is inherent in the people. Government is instituted for their equal protection and benefit, and they have the right to alter, reform or abolish the same whenever they may deem it necessary;”  It is necessary for Idahoans to reform Idaho government back to its constitutional principles and restore the political power that is inherent in the people.

These are just a few examples of the abuses of power by the Idaho government.  As a result of these abuses Idaho citizens no longer have any representation.  All efforts by the people, who retain the inherent power of governing, and in which government can only function by the consent of the governed, has resulted in the loss of Idaho sovereignty, not only for the state but for the people as well.

It is time for Idaho citizens, and patriotic groups, to advise elected officials to take notice about their dereliction of duty in upholding their sworn oath to the Idaho Constitution.  Elected officials and unelected bureaucrats must be advised of statutes, laws, administrative rules, and all other activity that violate Idaho constitutional principles.  Idaho citizens must share these issues and participate together in compelling the Idaho government into taking the necessary steps and restore Idaho to those constitutional principles.

In this endeavor, Idaho citizen experts will be utilized to formulate corrections that can be applied to restore those principles in statutes, legislative functions, and rules.  It is incumbent upon the people with inherent power to take on this task and formulate the necessary corrections for elected state officials and unelected state bureaucrats, and through their elected representatives.  Idaho elected officials will be remanded to make the necessary changes in law that will restore the Idaho Constitution principles in order to restore Idaho sovereignty.

The abuses of power by the Idaho government is the focus and its contribution to the loss of Idaho and citizen sovereignty.  It is time Idaho citizens address these abuses and in which they hold the right to do so.

It is time to come together Idaho.  Our common bond is the Idaho and U.S. Constitution.  Whatever the issue is for your group, it involves a constitutional violation.  Let’s come together, bring those violations to Idaho citizens, and to elected officials, and support each other in commanding our elected officials to make the necessary corrections.  It is our right to do so.  In response, it is the expectation that elected officials will work with Idaho citizens in correcting those abuses regardless if it is through changes in law, rules, relationships, procedure, or other means.