The True Spreaders Of Misinformation 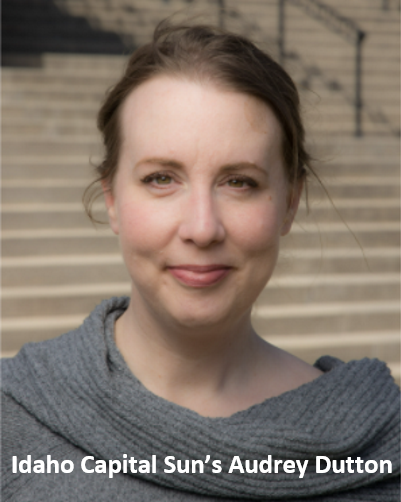 The True Spreaders Of Misinformation

Audrey Dutton is a Senior Investigative reporter for the Idaho Capital Sun, having won several awards for her work.  She recently wrote some articles about Covid-19 and vaccines.  Along the way she had no problem using insulting, and what could possibly be considered derogatory, language towards those who don’t align with her biases, while at the same time promoting misinformation herself.

Everyone might not be aware that there are four principles every journalist is encouraged to use in their practice: Seek Truth and Report It, Minimize Harm, Act Independently, and Be Accountable and Transparent.  Journalist Code of Ethics often include truthfulness, accuracy, objectivity, impartiality, fairness, and public accountability.  However, it seems these principles are only attributed to journalists who promote an accepted narrative.  All others who report outside of the accepted narrative are assigned derogatory labels and thrown into a basket for endless targeting, shaming, and slandering.  Perhaps it is time to call out and confront those journalists who promote the accepted narrative but in doing so are violating every aspect of the principles and ethics of which they are encouraged to uphold.

In her article, “Idaho’s history and anti-government subculture set the stage for a health crisis,” many of the claims she made are offensive, derogatory, or just down right inaccurate.  Let’s start with her disparaging remarks about Idahoans.

She cited a statement by Dr. Ted Epperly, “People who migrated here (in the 1800s) wanted to get away from the government.”  In reality, had Ms. Dutton investigated it properly, people came out west for a multitude of reasons.  Somehow, Ms. Dutton gleaned from this the impression that Idaho has an “anti-government streak” that contributes to misinformation.

What Ms. Dutton doesn’t understand is the Founders believed in citizen self-governance and America should be governed by the rule of law (now hijacked by the World Economic Forum (WEF), United Nations (UN), and their corporate cronies), concepts that have long been abandoned by the government.  These so called anti-government folks also understand government can only derive it’s just powers from the consent of the governed and they are exercising their duty to hold the government accountable, especially when it becomes destructive, which is where we are at now.  Perhaps Ms. Dutton doesn’t understand any of this or the enumerated powers delegated to the government in Article 1 Section 8.

She also declared the statement that the COVID-19 vaccine “reprograms your immune system” is a false claim.  However, it is not false.  A recent study does suggest the Pfizer vaccine “induces complex functional reprogramming of innate immune responses” requiring further investigation.  In an attempt to meet the journalistic principle of being impartial and fair, Ms. Dutton mentions the 1955 rollout of the polio vaccine causing the disease and how it contributes to “vaccine hesitancy.”  That was 66 years ago.  In reality it is the more current problems with vaccines that persist, and documented cases of vaccine injuries that contribute to concerns about receiving vaccines.  In all fairness, it should be acknowledged that in spite of these problems, traditional vaccines, not the current technology being used, have been very effective in disease reduction.  But that is of little solace to those who have been injured.

In another article Ms. Dutton wrote, “Health misinformation was an Idaho-grown product for years.  Now it has a body count”, her misinformation becomes even more egregious.  While this article includes multiple errors, there is one particular statement regarding Covid-19 vaccines, “However, the material never enters the nucleus of the cell, which is where our DNA is kept,” that can only be counted as a lie.  Ms. Dutton fails to mention that there are several different types of Covid-19 vaccines, choosing instead to mislead the reader and lump all vaccines into one pile.

One type of vaccine is the DNA vaccine.  In this scientific literature article, under the Misconceptions of mRNA Vaccines section, it clearly states, “DNA vaccines are transported into the nucleus of the cell…” and “Since DNA vaccines enter the nucleus of the cell, there is a risk of permanently altering the genetic makeup of the host cell.”  The Johnson & Johnson and AstraZeneca are DNA vaccines.  While Ms. Dutton minimizes the “rare” risk of myocarditis from the Pfizer vaccine, there are other cardiac complications that have occurred with other vaccines, resulting in a death in Korea.  Ms. Dutton should be questioned on her stance why citizens shouldn’t have the right to be protected from a vaccine mandate that may include this type of technology.

It seems Ms. Dutton relies heavily on the Centers for Disease Control (CDC) for most of her information rather than investigating other sources as her title of investigative reporter implies.  As a result, Ms. Dutton herself is guilty of spreading misinformation from sources with the most misinformation.

It would be advisable for Ms. Dutton to expand her research beyond the CDC as there are studies that dispute what the CDC chooses to publish.   Perhaps Ms. Dutton owes an apology to Dr. Cole, the legislators, and all the others she named for her claims of them bringing false information to the public, when indeed, as shown, the information was true.  It is she that has brought forth false information, with subtle hints of prosecution for those who she doesn’t deem is up to her standards.  But her source of information, the CDC misinformation factory, is her only truth, while failing to investigate before writing these hit pieces.

Oh, a side note and for the record Ms. Dutton, a study has shown evidence of a connection between 5G and Covid-19 but she is correct that the vaccine has no live virus, it is engineered and synthesized.

While Ms. Dutton makes sure she highlights Dr. Cole’s language, she herself is as guilty with inflammatory language.  And just who are those fact checkers cited by Ms. Dutton, other journalists such as herself?  No, it is a two-bit website called Health Feedback which itself spreads lies, such as Covid-19 vaccines are not gene therapy.  Oh yes, Covid-19 vaccines are gene therapy, which the President of Bayer even admits.  As for Health Feedback claims that Ivermectin isn’t effective in treating Covid-19, there have actually been several studies demonstrating its effectiveness, and supporting its use in Covid-19, as well as Hydrochloroquine.  Health Feedback is a member of the World Health Organization (WHO) an established Vaccine Safety Net.  That pretty much answers why the misinformation and propaganda persist, and why Ms. Dutton adheres to it.

As it turns out, Ms. Dutton is the spreader of misinformation and not the “anti-government” people she so diligently targeted.  Perhaps she should consider taking refresher courses in investigative journalism, principles, and ethics that journalists are expected to follow.  By all accounts she failed in seeking the truth, did not minimize harm because of her failure to do adequate research on her subject, nor has she been accurate, impartial, objective, or fair in her reporting.  She did not act independently but rather depended on misinformation sources to support her bias.  To be accountable to the public she should be transparent in her lack of journalistic integrity and serve the public with an apology.  It might also be suggested that she be removed from reporting on her “favorite topic” health care.  If Ms. Dutton had spent as much time responsibly researching the subject as she did in targeting and degrading specific individuals, perhaps there would be more truth to what she wrote.

Whatever information is presented, research it.  Check the source for validity and accuracy.  Regardless of what one believes or thinks about these vaccines, or Covid-19 itself, it will always remain the right of a self-governing individual to choose their own medical treatment.  And that should be respected, not mocked or ridiculed as it was in Ms. Dutton’s articles.  It is ethical to provide all information so each individual can make a decision for themselves.

Shame on you Ms. Dutton for your lack of investigative work and spreading information that is false.

Other important articles from Karen Schumacher: