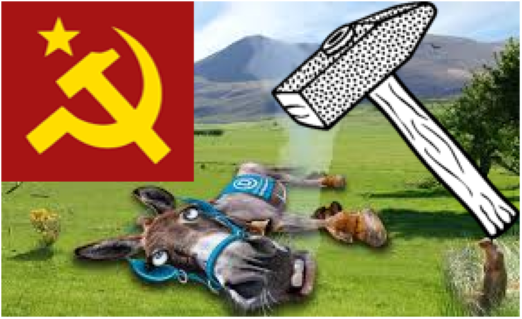 The Democrat Party of your parents and grandparents is gone, dead, kaput!

Obama’s transformation of America has finally leached into the Democrat Party via the socialist inspired left pushed by the nimrods of ‘The Squad,’ with direction from the Deep State’s leaders at the Council on Foreign Relations heralded by their komrads of the ‘Fake News’ big media.  What is particularly vexing is the disturbing support from big business, Hollywood and the criminal support of social media.  The party as we’ve known it is being replaced by what should be re-named ‘The Commicrats.’

Much of this would not be happening if our justice department were prosecuting obvious violations of law. i.e., The Russian Hoax, Clinton Foundation into ad nauseum and the many crimes of the Teflon Dems.

Author Steven Neill says in his ‘The Democrat Party: A History of Anarchy – Part 1,’   “… the Democratic Party has a long history of embracing violence to achieve their goals. From the bloody French Revolution, preservation of slavery, suppression of African-Americans, advancement of labor unions, and the 1960’s radical “New-Left” movement to the escalating mayhem of a national party attempting a coup of President Trump, no one explains the democratic love of violence better than the democrats themselves.”

The Democrat Party presently is antithetical to the precepts of what America stands for as created by our founders. We are not the land of freebies, guarantees, open borders, sanctuary cities or Sharia Law. We are about limited government, personal responsibility, moral codes such as the biblical Ten Commandments and the rule of law. Because of Democrat Party controls, America has been losing. Thanks to President Trump that trend is starting to reverse and America is starting to win again. The Dimms are in utter shock, ‘Big League.’

The donkey party has for decades rolled on a social bent promising and delivering programs and outright free money that conversely has dealt much harm to American freedoms and our necessary healthy commerce. Most ‘government programs’ have contained a lot of fat, political chicanery and socialist nonsense which is dis-incentivizing and eroding the American spirit to strive upward.

The Democrat Party today is not reaching out to voters so much anymore. They truly are no longer the party of Zell Miller. It is being led by a dictum of raw, far-left anger that is exposing their roots of blatant socialism and even fascism. The new ‘progressive’ Democrat leaders are leaving behind some Americans who don’t want any part of their new in your face orthodox socialism. It is apparent that the Democrat leadership is so arrogant that they don’t care, since they are buying and training new young socialists for Obama’s ‘Organizing for America’ legions who are out raising hell rioting in the streets, protesting everything worthwhile and recruiting new upstarts for the attractive pay of from $15 to $18 an hour plus expenses and transportation courtesy of George ‘Take Down America’ Soros.‘ It is truly a sad party when the best they have is purely obstructionist Chuck Shumer, Nancy Pelosi, Adam Schiff, Jerrold Nadler, Elizabeth Warren, Maxine Waters and now ‘topped’ off by ‘Sleepy Joe’ and ‘Phony Kamala.’

Government subsidies are part of socialism and have been running amuck for such as corn, tobacco, wheat, milk, lamb meat, livestock assistance, windmills, solar, rural electrification loans and loan guarantees, rural telephone loans and loan guarantees, public television, state library programs, AMTRAK, General Motors labor, Asian elephant conservation, rhinoceros and tiger conservation, Wildlife Without Borders – Latin America, the Caribbean and Mexico and refugee and entrant assistance programs to name just a few. There are a total currently of 1607 funding programs from our federal government to be precise, totaling $1,974,042,215,000 (that is trillion dollars)! There have been only our surviving businesses and those of us still working to pay for it all. Hopefully, with the Trump Presidency, subsidies will begin decreasing and disappearing as well the number of government programs, agencies and departments.

In the ‘perfect world’ expounded on endlessly from utopian progressives who control the media, Hollywood and the sorry socialist education system, to which we’ve been subjugated, they are constantly demanding fairness, assistance, social justice and redistribution. They do not want you to acknowledge the trade-offs for all their purported goodness and freebies. As certain as Newton’s Law of Physics ‘For every action there is an equal and opposite reaction,’ the same can be said for the balance sheet for life in America. There is no something for nothing!

Socialism’s trade-off of course, being that we give up individual freedoms, (in young-speak – let us make that ‘opportunities’). That means when an employer is forced to pay higher minimum wages his balance sheet’s reaction is to either raise prices or cut back on staff. Nothing for nothing. A business must make a profit. So what good is a $15.00 minimum wage if it kills the golden goose?

Every program the government creates has a very simple basis for its existence, ‘It must be supported with money derived from our taxpaying pockets.’ Therefore, like the business owner who must decide to cut back overhead (lay off employees) or increase prices, which may run off business, America, cannot sustain the magnanimity of all these programs and subsidies that are killing our nation’s balance sheet forever. Government itself is killing us!

It is a testament to our Capitalist system’s resiliency that we have endured as well as we have so far while rapidly backsliding under such erosive abuse. But this erosion will finish us for sure if unchecked as sure as ancient Rome went away. Socialism fails. Socialism just takes and produces nothing that can be taxed. Capitalism succeeds. Capitalism’s profits are the roots to all our taxes. Nothing else.

Lastly, from an Investor’s Business Daily editorial, “The Democrats’ lurch to the left is a tragedy for a once-great party. But for the Republicans, it is an enormous opportunity to craft a governing majority for years to come — unless, like the delusional Democrats, they blow it.”

Excerpts from ‘Overview of America’, a 29-minute video which will open your eyes to exactly what America is about:

“The Constitution was created to govern the government, not the people, and not the states, each of which is a guardian of its own sovereignty.

“The Constitution, our firm foundation:

“What set America apart from other lands was freedom for the individual. Freedom to work, to produce, to succeed and especially to keep the fruits of one’s labor.

“America became great precisely because the stifling effect of too much government had been prevented.

“However, freedom in America was not totally unrestrained, Americans overwhelmingly chose to limit their actions with moral codes such as the biblical Ten Commandments.

“Personal morality and limited government; it’s the combination that characterized America and made it the envy of the world.”

And lastly summing it all up is one of my favorite statements in the video: “The essence of freedom is the proper limitation of government” – Unquote from ‘Overview of America’