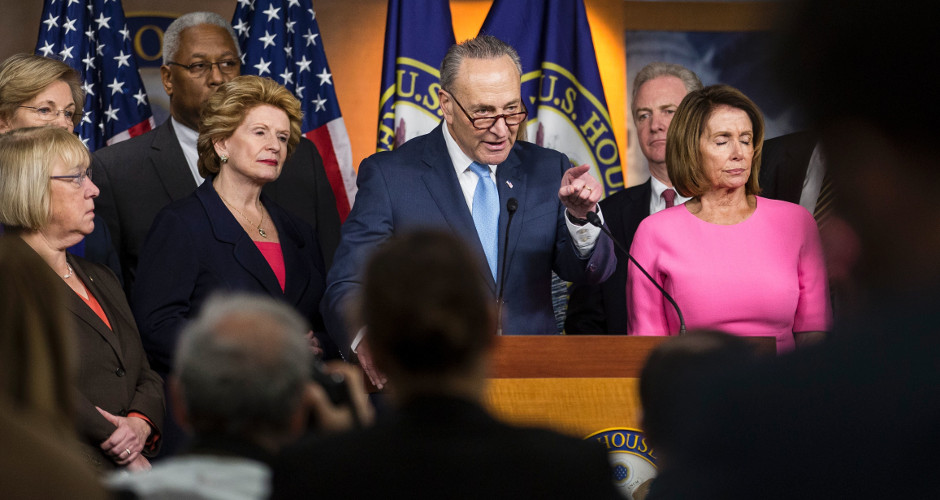 Today’s Democrats: The more things change, the more they stay the same. “This is how we’re going to kill your wife.”

Since the election of Donald Trump, the vitriolic attacks on Trump, his family, cabinet, and conservatives in America today are non-stop. Almost daily there is an outrageous attack by the left on people they do not agree with which is promptly glossed over by the mainstream media (MSM) as a justified reaction to Trump. To be fair, there have been and continue to be those on the right with a violent and/murderous bent in them. People like John Brown, Michael Fredrick Griffin, shooter of abortion provider Dr. David Gunn, Timothy McVeigh and the Sovereign Citizen movement are all questionably labeled as “right wing.” Also some of the violent attacks attributed to the left are people with serious mental issues just like some of those from the right.

The methodology used by the Southern Poverty Law Center (SPLC) to create the list of “right wing terrorism” is also highly dubious as they often falsely label a violent attack as one done by a “right winger” and simply ignore left wing and Muslim violence. Many are not even acts of terrorism, and/or are given more infamy than acts of the same magnitude done by Islamic and left wing terrorists. However, there is substantial evidence that points to McVeigh as not being a “right-winger” at all but possibly a stooge working for Hussain Al-Hussaini, an Iraqi Republican Guardsman. Other reputable sources conclude that McVeigh had no links to the militias he was supposedly in league with, plus he never supported a “limited” government, but rather an all-powerful racist state.

While not all of the verbal abuse and increasingly violent physical attacks are by members of the Democrat Party, the majority of the perpetrators lean to the left. This violence is certainly not going unnoticed by the majority of Americans as a June, 2018 poll done by Rasmussen revealed that 59% of American voters are concerned that those who oppose Trump’s policies will resort to violence to stop them and 31% now believe that a new civil war will happen in America within the next five years.

The history of the democrats and their left wing comrades certainly give solid support to the results of this poll. From its creation by Thomas Jefferson, the Democratic Party has a long history of embracing violence to achieve their goals. From the bloody French Revolution, preservation of slavery, suppression of African-Americans, advancement of labor unions, and the 1960’s radical “New-Left” movement to the escalating mayhem of a national party attempting a coup of President Trump, no one explains the democratic love of violence better than the democrats themselves.

We are not to expect to be translated from despotism to liberty, in a feather-bed. Thomas Jefferson

Thomas Jefferson, master craftsman of the Declaration of Independence; started both, the University of Virginia and the Library of Congress; launched the Lewis & Clark Expedition; made the Louisiana Purchase; wrote the Virginia Statute for Religious Freedom and is widely held as one of the most intelligent men to occupy the office of President.

Thomas Jefferson was also a deeply flawed man. He is the man who famously penned that “all men are created equal” while owning hundreds of slaves. Alexander Hamilton wrote of him: “I admit that his politics are tinctured with fanaticism, that he is too much in earnest in his democracy, that he has been a mischievous enemy to the principle measures of our past administration, that he is crafty & persevering in his objects, that he is not scrupulous about the means of success, nor very mindful of truth, and that he is a contemptible hypocrite.”

Jefferson strongly supported the principle that the power of the government should be limited and rest in the hands of the states which were then controlled by property-owning Americans. This Jefferson felt, would keep the personal liberty and virtue of the republic in the hands of the yeoman farmer. Jefferson also saw the French Revolution, with its class leveling effects, as the next step in republicanism. Hamilton however, supported a stronger federal government supporting a flourishing merchant economy which meant trade with their former enemy, Great Britain. Those two views came to loggerheads when France executed French King Louis XVI and started the “Reign of Terror.”

Jefferson’s enthusiasm for the French Revolution was not diminished as it descended into a bloodbath; in fact, he openly plotted to help France by pushing the US into war with Great Britain. Jefferson provided government funds and James Madison wrote anonymously to a newspaper, the National Gazette to promote the French Revolution, attacking Britain’s mercantile policy, Hamilton and even his old friend, George Washington.

William Short, US Minister to the Netherlands and a friend of Jefferson, had also supported the French Revolution. But when it plunged into chaos, Short wrote to Jefferson to in an attempt to end Jefferson’s infatuation with the French Revolution. Jefferson’s responding letter to Short revealed his total commitment to the atrocities being committed in the name of liberty: “the tone of your letters had for some time given me pain, on account of the extreme warmth with which they censured the proceedings of the Jacobins of France. I consider that sect the same with the Republicanpatriots.”

Jefferson then went on to call the Jacobins “virtuous republicans who had realized the failures of constitutional monarchy and agitated for reform with the best interests of the people in mind and the will of the nation behind them.”

“In the struggle which was necessary, many guilty persons fell without the forms of trial, and with them some innocent. These I deplore as much as anybody, and shall deplore some of them to the day of my death. But I deplore them as I should have done had they fallen in battle … The liberty of the whole earth was depending on the issue of the contest, and was ever such a prize won with so little innocent blood? My own affections have been deeply wounded by some of the martyrs to this cause, but rather than it should have failed, I would have seen half the earth desolated. Were there but an Adam and an Eve left in every country, and left free, it would be better than as it now is. I have expressed to you my sentiments because they are really those of 99 in a hundred of our citizens.”

In short, the man who wrote one of the most important documents in human history that guaranteed “Life, Liberty, and the Pursuit of Happiness” was willing to see half the planet burned to the ground to protect his vision of the American Republic. He completely agreed with the modern democratic philosophy of “the ends justifying the means” no matter how much blood was shed.

The 1800 election between Federalist John Adams and Democratic – Republican Thomas Jefferson was one of the most turbulent in US history. There were even militias from both parties practicing with their firearms in case they were called into service. In the end, Jefferson won the election and the Democratic – Republican Party would occupy the White House for almost thirty years. There are many historians who wonder what Jefferson would have done had he lost the election. His unquestionable support of the violence in the French Revolution does raise the specter of civil war, especially when combined with a letter Jefferson wrote to his friend Joseph Priestly. The letter contained a paragraph that simply stated that should Jefferson have lost the election, within eight weeks; the democratic – republicans in Congress would have “repaired” the Constitution where it was defective. He cannot have imagined the Federalist would sit idly by while the democrats rewrote the Constitution for their own benefit. How far the democratic – republicans would have gone to protect their election results will never be known, but the threat of toppling the US government would also transform from a democratic talking point into a very real civil war.

As the following examples clearly show, the Democrat Party is attempting one of the most brazen power grabs in US history by attempting the overthrow duly elected President Donald Trump.

Immediately following the election, Hillary Clinton, the press and the Deep State began to undermine and sabotage Trump’s presidency through a concocted tale of collusion with Russia to win the 2016 election. Using a play out of Joseph Goebbels playbook, accusing others of that which you are doing, and using deep state lackeys in the FBI, CIA, and Department of Justice, the democrats have been able to create an FBI investigation into the non-existent conspiracy.

Millions of dollars and thousands of hours of investigation later, the only results so far show that the Russian collusion was done between Russia and Hillary Clinton, Barack Obama along with other democrats, not Donald Trump. But never letting facts get in the way of seizing power, the democrats weaponized US intelligence agencies to spy on candidate Trump, planted at least one mole to entrap a Trump aid in collusion with Russia and knowingly used a fake dossier to obtain a FISA warrant on Trump’s Campaign. Following the failure to impeach Trump for what is now called “Russiagate,” Democratic Congressman, Steve Cohen openly called for a military coup against Donald Trump “Where are our military folks? The Commander in Chief is in the hands of our enemy!”

While former FBI Director and Weasel In Charge of the Russiagate investigation, James Comey, also called for a coup against Trump: “This was the day an American president stood on foreign soil next to a murderous lying thug and refused to back his own country,” adding “Patriots need to stand up and reject the behavior of this president.” The scope of the lawlessness being displayed by the Democrat Party today clearly shows they are engaged in an all-out war to rule over America.

One of the most important principles in Western Civilization history has been the presumption of innocence principle. First written in the sixth century ‘Digest of Justinian’ and established as United States law with the 1895 Supreme Court case “Coffin v. United States.” The presumption of innocence principle is one of the major protections given US citizens against false arrest and today, in a fully televised bloodbath, we are watching the democrats kill it.

The nomination of Judge Brett Kavanaugh to the Supreme Court has for all intents and purposes, turned into a carefully planned and well-funded character assassination of Judge Brett Kavanaugh. Having undergone six FBI investigations and served some twenty-five years in the public arena, it was not until his nomination for the Supreme Court that a woman, Dr. Christine Blasey Ford, found herself compelled to accuse him of attempted rape, thirty-six years previously.

Ford has no witnesses, no collaborating evidence, she never mentioned Kavanaugh’s name before, but now, she is being used by Democrat operatives to not only destroy Kavanaugh’s good name, but to smash one of the pillars that American freedom rests upon, presumption of innocence.

While character assassination is as old as mankind itself, the Democrat Party has excelled in it over the years with notable examples of Thomas Jefferson hiring James T. Callender to smear John Adams and Lyndon B. Johnson destroying Barry Goldwater in the 1964 Presidential campaign. But their new tactics are not intended to only destroy a person or a candidate, but also to create a standard of ‘guilty’ unless proven innocent. The legal ramifications for this is staggering and goes well with the Purge being done on conservative websites by Google, YouTube, Facebook, etc. What we are witnessing today is nothing less than the full implementation of Orwell’s “1984” with the Democrat Party acting as the Ministry of Truth. Should the Democrat Party gain a majority in Congress during the mid-term elections, what is being done to Kavanaugh will be a small skirmish as they bring total war on America by impeaching President Trump.