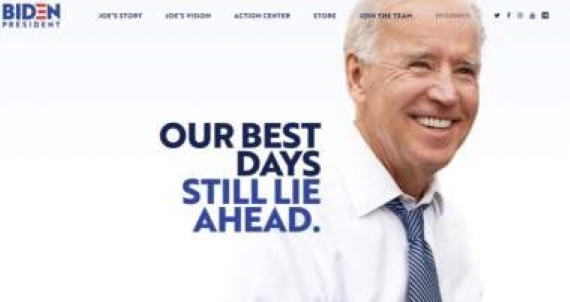 Joe Biden. This is what a “moderate” Democrat looks like? Really? Well, considering the craziness of the Democratic primaries with a lineup that included Bernie Sanders, Beto O’Rourke, Pete Buttigieg, Kamala Harris, and Cory Booker, Biden may seem moderate by comparison. And that, of course, is the whole point of the media narrative in attempting to sell Joe Biden as a “centrist,” “Moderate,” “conservative” Democrat to Middle American voters. However, aside from Biden’s long public record of supporting far-left positions on political, social, economic, and moral issues, his list of current endorsers speaks volumes about the agenda we could expect from a Biden presidency. Consider this very abbreviated list of endorsers:

Jane Fonda, the unrepentant actress/activist/traitor who sided with the Communist Vietcong while they were killing American soldiers, endorses Joe Biden. In fact, “Hanoi Jane” is co-hosting an upcoming campaign fundraiser for him with her Hollywood comrades.

Angela Davis, the longtime terrorist/communist/professor, Black Panther activist (and official candidate for U.S. vice president on the Communist Party USA ticket in 1980 and 1984) recently gave a plug for Biden in an interview on Vladimir Putin’s RT (Russia Today) TV channel. (See a short list of her revolutionary exploits here.)

Noam Chomsky, the 91-year-old Marxist professor of linguistics, who has spent the past 60 years supporting every far-left cause, says we have to support Biden because “the future of humanity is at stake,” and, “We have to get rid of this malignancy [President Trump].”

The Communist Party USA (CPUSA) prefers Bernie Sanders’ full-on socialism, but has coalesced behind Biden, the presumptive Democrat candidate, nonetheless, declaring, “We must defeat Trump and the GOP while working to build a mass movement for socialism in this country.”

Minnesota Representative Ilhan Omar and Minnesota Attorney General Keith Ellison, two of the most prominent (and militant) Muslim elected officials in the nation, signed a letter of endorsement for Joe Biden prior to the “Million Muslim Votes” summit. The letter and the summit were organized by Emgage Action, which is working to turn out Muslims to vote for Democrats. “This upcoming presidential election is arguably the most important one within our lifetime,” Emgage Action CEO Wa’el Alzayat wrote in a statement. “We cannot afford another four years of a Trump presidency.” Emgage Action tweeted on July 22: “Vice President @JoeBiden quotes the Prophet Mohammed (PBUH) in his historic address to Muslim Americans at the Emgage Million Muslim Votes Summit!” Biden, like House Speaker Nancy Pelosi, New York Governor Andrew Cuomo, and other apostate Catholic politicians who reject their church’s teachings on abortion, marriage, and other moral issues, is effusive in his praise for Islam. “I wish we taught more in our schools about the Islamic faith,” he told the Muslim summit. “I wish we talked about all the great confessional faiths. It’s one of the great confessional faiths.”

Dolores Huerta, radical labor union activist, co-founder of the United Farm Workers, honorary chair of the Democratic Socialists of America, propagandist for communist dictator Fidel Castro, and activist in far-left causes for more than five decades, announced on May 1 (May Day, celebrated by communists worldwide) 2020 that she plans to do “whatever I possibly, humanly can to make sure that Joe Biden gets elected.”

“Charlotte” Clymer, the gender-confused transsexual, former official of the (LGBTQ) Human Rights Campaign, and apologist for mass-murdering Soviet Dictator V.I. Lenin, wrote a Biden-endorsing column for the Washington Post entitled “Take heart, progressives: When the party moves left, Biden has always followed.” The subtitle expounded further: “The former vice president has moved left on everything from same-sex marriage to criminal justice to abortion rights.” This is the same Clymer who took to Twitter to school critics that had called out the cancel culture mobs tearing down statues of Washington, Jefferson, Lincoln, Lee, etc., while the giant statue of Lenin stands unscathed in the People’s Republic of Seattle. Eschewing the “civility” he/she demands of others, Clymer tweeted: “Lenin was not a slave owner, you Confederate apologist f**ks.” Actually, Comrade Lenin enslaved tens of millions and slaughtered millions more. His successors — Stalin, Mao, Tito, Ho Chi Minh, Nicolai Ceausescu, Fidel Castro, et al. — have slaughtered over 100 million and enslaved several billion. (Minor details for Biden supporters such as Mr./Ms. Clymer.)

Evan Wolfson, a militant homosexual attorney who led the LGBTQ legal attack on the Boy Scouts of America and is widely proclaimed the “architect of the gay marriage movement,” penned a May 4, 2020 piece for LGBTQ Nation titled “Joe Biden has met his moment. America needs him now more than ever.” According to Wolfson: “It’s Trump or Biden. Ruin or renewal. Fear or hope. More of Trump is intolerable; it is literally killing us. I choose Joe Biden for president.”

MoveOn, the militant organization launched with major funding from billionaire George Soros and that has funded numerous political campaigns for radical candidates and helped orchestrate “peaceful” street chaos for the past two decades, says it is committing $20 million to defeating Trump and electing Biden. Earlier in the Democrat primary season, Texas Representative Beto O’Rourke and Vermont Senator Bernie Sanders held the leads among MoveOn members. However, Biden now has the “overwhelming” support of the group, which praises his platform as “the most progressive platform in Democratic Party History.”

All of the above notwithstanding, the establishment media continue to portray Joe Biden as a “moderate,” “centrist,” even “conservative” Democrat. Far from it! As his record and his endorsements clearly show, Joe Biden is ready and willing to go as far left as he thinks the political moment and the political tides will allow. On issues such as abortion, gun rights, property rights, taxes, regulation, government surveillance, LGBTQ insanity, the cancel culture, COVID dictatorship, etc., it would be foolish in the extreme to expect any moderation from Biden. Currently, with the COVID-1984 agenda and the BLM-Antifa riots and revolution taking the anti-Trump/anti-American/anti-Christian bigotry to unprecedented levels, he apparently feels sufficiently comfortable putting the metal to the socialist pedal, depending on his media allies to continue providing him with “moderate” cover. But as election day approaches, it’s going to be harder for Biden to extricate himself in voters’ minds from the forces of chaos and destruction in smoldering Democrat cities that his political endorsers have unleashed and promoted.

What’s REALLY Behind the Riots? (VIDEO)

William F. Jasper is senior editor for The New American magazine and thenewamerican.com.