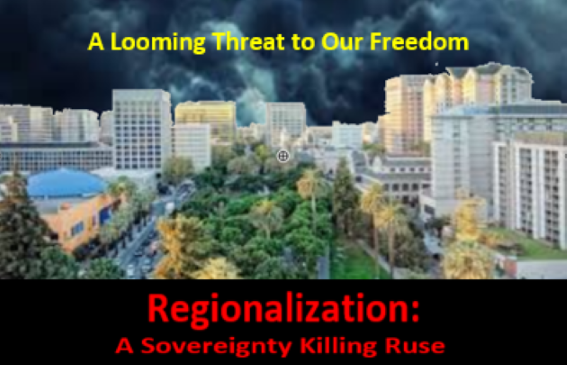 This form of Soviet style government is created through planning departments and regional teams operating at the local level.  It is unconstitutional regional government where “we the people” will be ruled and regulated by unelected bureaucrats through globalists’ United Nations generated programs.

Decentralization, NOT regionalization is the key to liberty and prosperity.

After growing up and working in the New York City area most of my life I finally moved from the socialist, overtaxed and overregulated urban metroplex, to North Idaho where an individual could still breathe the American dream of freedom.

Around August 2011 I was listening to a local talk radio show in Sandpoint with guests explaining Agenda 21.  Bingo! Red flags went up. The two far left guests were praising the Obama administration’s launch of the World Advisory Council, in other words ‘touting their marching orders’

When a caller asked if anyone could apply to be on one of the taskforces the response was no, the meetings were not open to the public. This I found very interesting. It was, sort of, creating a problem where none existed and coming up with a solution. One of the guest speakers stated, “We will just throw it out there and see what sticks.” Their task forces were to include the environment, education, community safety, economic vitality and healthcare.

So why would the so-called experts want to create the same mess in North Idaho that I escaped from in New York? The answer is simple. One guest speaker moved to North Idaho from Seattle, Washington and the other one was a homegrown socialist product of public and college education, the classical know it all type.

Believe me when I say the communist/globalist/socialist agenda’s movement is alive and growing in every corner of our nation with metro regional government as one of the vehicles to do an end run around our federal and state constitutions thus destroying our republic. A vast majority of this old Soviet style government is introduced through local planning departments and regional teams operating under the radar at the local level. Agenda 2030 has filtered down from the United Nations and Americans are now feeling its efforts in the rural areas of the hinterland. Why target the rural areas? Because it’s hard to control the population that is independent, God-fearing and capable of taking care of themselves.

Bigger government and overregulation must be installed and forced upon the rural population in order to enslave them.

As an example, here in Bonner County, Idaho about eight years ago, the country folks got wind of the introduction of a countywide watershed overlay ordinance that was to be presented to the County Planning Commission with intent to be adopted as a regulation countywide. It was one of the most oppressive ordinances I’ve ever read.

When the snow melts come springtime, water runs along the dirt road of a person’s property for 50 to 75 feet in the hayfield you cannot till the land, graze livestock or cut down a tree. If you own 5 acres or 300 acres you can only store 5 gallons of gasoline. Diesel fuel for tractors would have to be contained in cement storage embankments.  The list went on and on.

Fortunately at the time, we had a County Commissioner who formed our first Property Rights Council. The environmentalists were absolutely beside themselves. At our first public meeting the Commies crawled out from under their rocks like venomous reptiles.  Members of the Property Rights Council were labeled baldheaded Nazis and so on. Should their tactics work this go around?

After six-months, the testimony from ranchers, water associations, the state’s Department of Environmental Quality and the Property Rights Council produced a white paper stating the water quality of the county was already protected by 7regulations in place. No other county in the entire state of Idaho had such an ordinance. If they could ram it through North Idaho it would have gone like wildfire to every other county and state.  This was the test case. 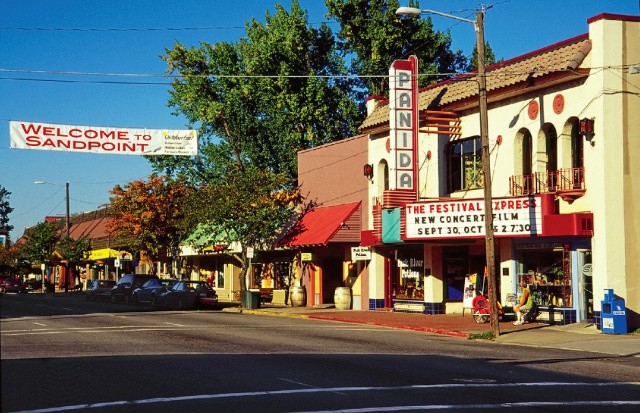 About 7 years ago, Members of the Property Rights Council did their homework, dug in their heels and presented our findings to the County Board of Commissioners who in turn agreed with the findings and analysis that this was a massive overreach of overregulation of government at the local level. And for the record this watershed overlay originated from the Planning Department of the City of Sandpoint and was passed on to the County Planning Commission. It would have been regional government on the move.  It all sounded nice and fuzzy, but the end result would have put ranchers, farmers and loggers out of business.

Fast-forward to early 2018, being informed by someone in the know, a group called 7B had received seed money to bring in a facilitator from the University of Utah, SJ Quinney College of Law.  I filed a Freedom of Information Request through the county. Bingo, here we go again, their back under a new name. Just connect the dots and their game plan appears before your very eyes. They lie and twist the truth.

At around the same time the county had adopted a plan to allow citizens to form sub-committees to begin work drawing a comprehensive plan based on the area of the county where they lived.  I found this as a step in the right direction. Rather than government from the top down this was by and for the people from the bottom up. Decentralization is the key to liberty and prosperity.

Don’t get me wrong. We are so deep in regulations we have to walk this back step-by-step. The wolves are not only at the door, but also within the gates. If we are to eliminate planning and zoning, massive outside money, even foreign money will swoop in like a committee of vultures. When all the farm and ranch land is gone, game over. Wall-to-wall housing developments and total urbanization take over. If you haven’t noticed the more urban an area becomes the more socialist it becomes.

More Regulation, Higher Taxes and Less Freedom Under the Radar

While attending my first 7B Collaborative Workshop,, they as a group exposed themselves in plans.  Being identified as a left-wing group it would be to their advantage to change their name. Sure enough, after the vote, the name was changed to the Bonner Regional Team and adopted as such. All the team’s members are from the quad cities of Sandpoint, Dover, Kootenay and Ponderay.

The City of Sandpoint is run and controlled by a collection of self-serving socialists who never saw a tax or regulation that they couldn’t love. Tax-and-spend. “If it moves tax it, if it keeps moving regulate it and if it stops moving subsidize it,” just as President Reagan coined the left.

Basically the Sandpoint elected officials have run their budget into a ditch. In 2017 to 2019 the city budget has ballooned from 17 million to 42 million, a massive increase in spending.  This, right after the City Council and Mayor hired a city manager for over $100,000 saying the elected officials are greatly underpaid. Grow the Empire. After all, government is the new God in their minds’ eye.

I could go on with a lot more detail so let me cut to the chase. The socialists in charge of the metro urban areas have dug themselves into financial hellholes. The only way for them is to continue down the same path and spread economic disaster out into the county with implementing metro and regional government. After attending these regional planning workshops, yours truly had enough. It was time to pull the curtain off the Wizard of Oz. As a precinct elected official of the County Republican subcommittee I decided to act.

Authoring and bringing forward a resolution, exposing the dangers of regional planning government was presented to the entire body of the County Central Committee. Monthly updates were included. The resolution was voted on, passed by unanimous vote and forwarded to the County Board of Commissioners asking for the county to disengage and no longer participate in laying the foundation for regional government, thereby halting the spread of oppressive unconstitutional bureaucracies, and bigger government.  The Commissioners also voted to pass the resolution in February.

A big problem is new arrivals from other states that are running from high taxes and regulation. They flee places like California, Seattle and elsewhere. Once they get here they want to create the same nonsense that they ran away from. More services, which in turn, will lead to higher and higher taxes and out-of-control spending. We can’t have it both ways.

I’m amazed that the average person does not have a clue about how the government that our Founders bestowed upon us has its limits and how it should function, not as a democracy of mob rule, but as a decentralized constitutional republic. In closing, I don’t want to hear the mantra “I am only one person, what can I do?”

You can start by unplugging your TV, stand erect, educate yourself to what is going on around you, get off your duff and get involved. You have to be in it for the long haul. We didn’t get into this mess overnight and it will take a lot of time, effort, and guts to fix what is inside out and upside down. You have a choice slavery or freedom.  Which will be?