The Kootenai County Deputy Sheriff’s Association was originally founded in Idaho in 1982. Several times over the course of the last 38 years the entity has been administratively dissolved by the State of Idaho for failing to follow basic guidelines for maintaining a business entity in this state: mainly that each entity shall file an annual statement which simply names its officers, lists a “registered agent,” and verifies their address. In fact, this organization is currently in violation of state law and has not registered an annual filing this year. 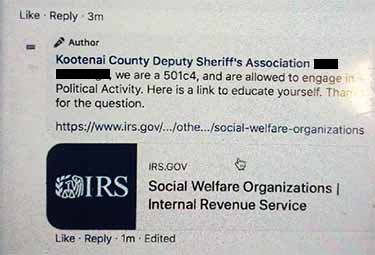 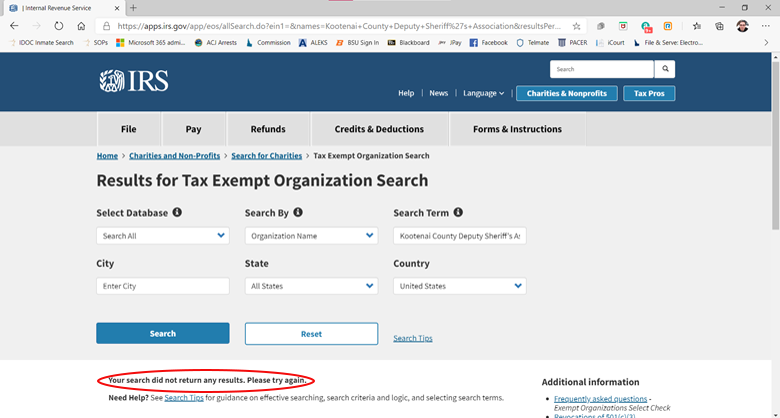 501(c)(4) organizations are tax-exempt, but donations to them are generally not tax-exempt.  If the KCDSA is a 501(c)(4) as they claim, and considering that the KCDSA recently endorsed one candidate and has spent considerable time, effort, and funds to promote that candidate, they may face scrutiny from the IRS.  The IRS states: “To be tax-exempt as a social welfare organization, the earnings of section 501(c)(4) organization may not inure to the benefit of any private shareholder or individual.

Judging from the activities of late, the KCDSA acts more like a Political Action Committee, or PAC, than a nonprofit. In fact, they are registered with the State of Idaho as a PAC.  This PAC’s treasurer is Kootenai County detention deputy Daniel Valk, a recently retired California police officer from Vacaville.

The vast majority of this PAC’s initial $15,000 funding came from a man named Dave Chapman who contributed $10,000

Idaho campaign finance laws require monthly finance reports to be filed with the Idaho Secretary of State.  The penalty for late filing of campaign finance reports is $50.00 per day per Idaho Code 67-6625A.  In addition to monthly reporting requirements, any donations of $1000 or more must be reported within 48 hours 67-6607(3).  Any “electioneering communication” costing $1000 or more must also be reported within 48 hours. 67-6628(3)

Here is where the questions start for the Kootenai County Deputy Sheriff’s association:

The KCDSA formed a political action committee on June 2, 2020; prior to that, the KCDSA “association” qualified as a “nonbusiness entity” under Idaho code 67–6602(18).

They organized their PAC on June 2, 2020, but there are donations to the PAC  dated April 1, 2020.  This causes one of the following issues:

Another issue with the KCDSA forming a PAC:

(a)  Any person specifically designated to support or oppose any candidate or measure; or

(b)  Any person who receives contributions and makes expenditures in an amount exceeding one thousand dollars ($1,000) in any calendar year for the purpose of supporting or opposing one (1) or more candidates or measures.

Did the KCDSA receive contributions in excess of $1000 to support Robert “Bob” Norris for Kootenai County Sheriff?  If so, did the people donating know that was where the money would be spent?

Apart from their initial filing in June as a PAC, where they disclosed their April donations and expenses, and in spite of having mailed out numerous publications which endorse Norris for Sheriff, as well as taking out full-page ads in the Coeur d’Alene press debasing Norris’ opponents, the KCDSA PAC failed to file even the minimal campaign finance disclosures required by law over the past 6 months.  That is, until The Idaho Report inquired about it.  We contacted the Idaho Secretary of State to ask if the KCDSA had filed the required reports.  Our first inquiry was on October 5, 2020, followed by a request for an investigation on October 7.  The KCDSA filed a report for April on 10/7/2020.

The Idaho Report contacted KCDSA President Sgt. Jeremy Hyle and Treasurer Daniel Valk Friday, October 9.  We asked why they had not filed any reports.  We have not yet received a response; however, the May, June, July, August, and September reports were filed on October 12, 2020. 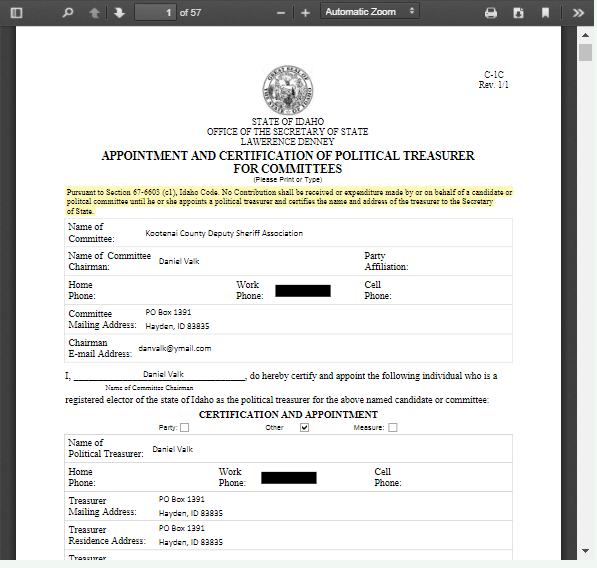 With the leadership at KCDSA so focused on supporting Republican Candidate Robert “Bob” Norris for Sheriff, they have repeatedly failed to uphold their responsibilities under the law, which is unusual for an “association” made up of law enforcement personnel.

Does the Deputy Sheriff’s Association represent the members of the Sheriff’s Office or is a small group of supporters using the organization for their own purposes?

Were they derelict in filing proper and timely reports in order to conceal the more than $17,000 they spent on political activities or was this simply collective incompetence?

Who donated the money to the “Association” that was given to the PAC?

Who decided to transfer money from the “association” to the PAC?

How long will it take for them to file that missing 48-hour notice once they read it here?

Let us all hope that they are better at filing accurate and timely crime reports.

Whatever the case, it is high time that the members of the KCDSA start asking for the truth from the association leadership.  Like, how did they overlook the fact that Norris was living and working, or at least seeking employment, through 2016 in California when the KCDSA tells us he was a resident of Kootenai County?  More on that later…

Obtain your own copy of the finance reports at https://elections.sos.idaho.gov/TED/CampaignPublicPortal/Summary.aspx

The Timeline: What the KCDSA missed, including intent to defraud Kootenai County