‘Deadly, deathful fear of what this country faces if Trump loses’

If there’s one video Americans need to watch before voting in the 2020 presidential race, this is it, says talk-radio host Rush Limbaugh.

It features Thomas Klingenstein, the chairman of the board of the Claremont Institute, Limbaugh said Tuesday of the 17-minute video.

“It’s not flashy. It doesn’t have massive production values. It’s nothing like that. It’s just one man and his legitimate reasons for Trump and his deadly, deathful fear of what this country faces if Trump loses,” he said.

“He goes through his explanation of what this election is really all about, what America faces. One of the most fascinating things that Mr. Klingenstein points out, is he actually says that in normal times he wouldn’t even think of voting for this man. Now, don’t take that as a negative,” Limbaugh said. “Do not think you’ve got a Never Trumper here who’s changed his mind. It’s not that at all. He’s just being honest with you. In normal times, he wouldn’t think of voting for Trump. But he believes these are not normal times. He, in fact, says that in these times, Donald Trump is the only man who can save this country, is the only man who can do what is necessary to preserve the American way of life,” said Limbaugh.

“It’s just one man and his impassioned. … It’s not all that impassioned. It’s pretty cut and dry, straightforward,” he continued. “He’s an intellectual, obviously, but he’s scared to death, folks. He’s literally scared to death like we all are, and he explains why Trump is the only person that has a prayer of saving America.” 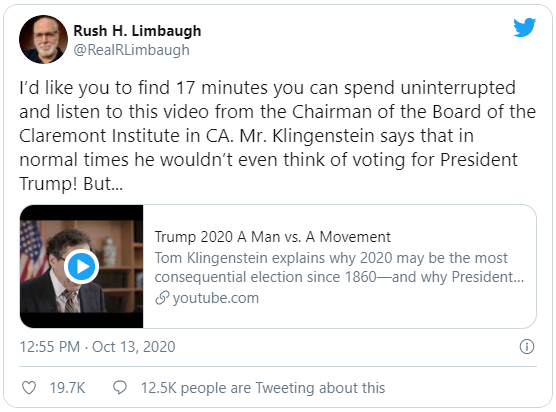 In the video, Klingenstein said the 2020 election is the most important since 1860.

Is Trump the only person who has a prayer of saving America?

The choice, he says, is between “two competing regimes, two ways of life, that cannot exist equally together.”

He calls one “traditional America,” in which people believe in individual rights, the rule of law and a shared understanding of the common good. Valued are hard work, self-reliance and patriotism.

Klingenstein calls the other multiculturalism, which he says has taken over the Democratic Party.

“It is not like a revolution; it is a revolution, an attempt to overthrow” America as it was founded, he says.

That view holds that society is comprised of identity groups based on race and gender oppressed by white males.

The cost is “never-ending redistribution of wealth and power,” which could be accomplished, he says, only by a “tyrannical government.”

“One where dissenters are silenced,” he warns.

“I do not think it is any more complicated than that.” 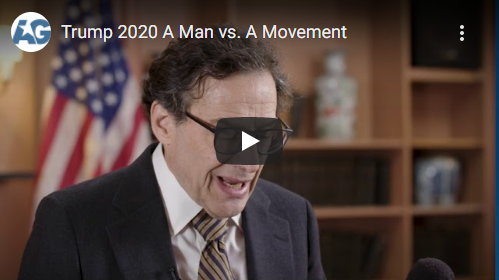 That would be “good” as “in the sense that American is a decent place,” Limbaugh said.

The Biden campaign, however, Klingenstein said, casts America in a bad light.