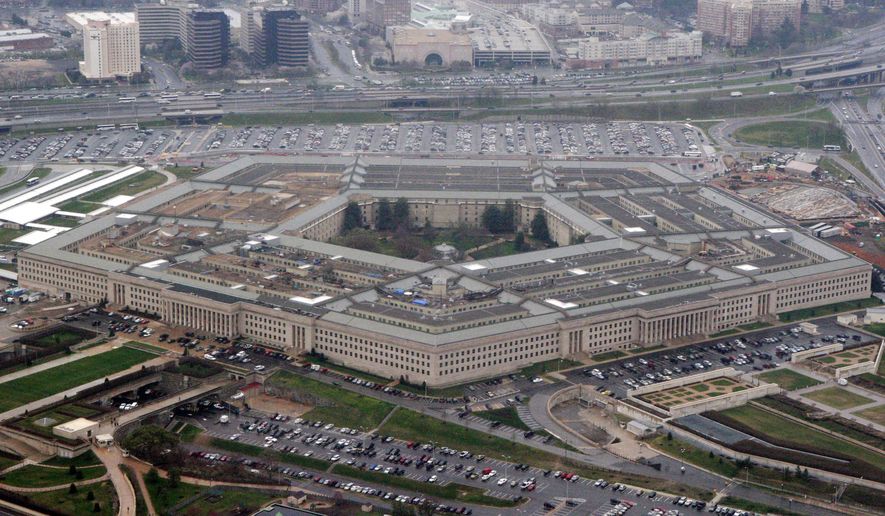 FILE – The Pentagon is seen in this aerial view in Washington, in this March 27, 2008 file photo. House and Senate negotiators agreed on a defense policy bill that authorizes $700 billion for the Pentagon in the 2018 fiscal year, a dramatic increase over what President Donald Trump sought as lawmakers aim to restock what they say is a depleted U.S. military. (AP Photo/Charles Dharapak, File)

ABC said the report was issued in November by the National Center for Medical Intelligence, an arm of the Defense Intelligence Agency (DIA). It supposedly warned of a pandemic of what would be later named COVID-19.

Relying on sources who said they saw the report, ABC News said the warning was briefed “multiple times” to the DIA, the staff of the Joint Chiefs of Staff and the Trump White House.

The Pentagon said it did an exhaustive search and could find no such document.

“As a matter of practice, the National Center for Medical Intelligence does not comment publicly on specific intelligence matters,” Col. Day said. “However, in the interest of transparency during this current public health crisis, we can confirm that media reporting about the existence/release of a National Center for Medical Intelligence Coronavirus-related product/assessment in November of 2019 is not correct. No such NCMI product exists.”

A defense official told The Washington Times, “The center is part of the broader Intelligence Community effort to provide intelligence, expert assessments, and pandemic warning to senior U.S. government leaders, with the critical mission of supporting defense policymakers and U.S. warfighters. NCMI and the Defense Intelligence Agency spent considerable time over the last 24 hours examining every possible product that could have been identified as related to this topic and have found no such product.”

The South China Morning Post reported scientists believe they have found perhaps the first COVID-19 victim on Nov. 17 in Hubei Province, home to Wuhan City, where the virus broke out in December 2019 and spread to the world.

China reported to the World Health Organization in mid-January that the coronavirus wasn’t transmitted human-to-human, an inaccurate statement passed to the public by WHO.