When he penned a short, simple letter to Idaho Governor Brad Little questioning the wisdom and constitutionality of emergency stay-at-home directives concerning the coronavirus epidemic, Bonner County Sheriff Daryl Wheeler was not expecting the media firestorm and the avalanche of over-the-top condemnation that have rained down on him.

The New York Times suggested the sheriff was leading a “rebellion” that “threatens to undermine coronavirus orders,” and quoted area doctors that condemned the sheriff’s call for moderation in response to the virus. One physician, a prominent surgeon, went so far as to call Sheriff Wheeler’s letter appeal “criminal” and stated that Sheriff Wheeler (and Idaho State Representative Heather Scott, who supported the sheriff’s appeal) might be denied medical care as a result. Dr. Robert J. Burnett wrote, in an April 5 letter to the editor in the Bonner County Bee, in the event that either Sheriff Wheeler or Rep. Scott happen to contract COVID-19 and need hospital care and/or a ventilator, “that I, and all of my co-workers take comfort in knowing that, because of your behavior, you have essentially relinquished your claim to any of these potentially scarce resources.”

Sheriff Wheeler has been besieged by national, state, and regional media, but has declined to accept any interviews or issue any additional statements. He granted The New American an exclusive interview (see video below), which was conducted on April 8 at a ranch near Sandpoint (the county seat) to avoid the frenzy of the media pack that has hounded him since he issued his letter. 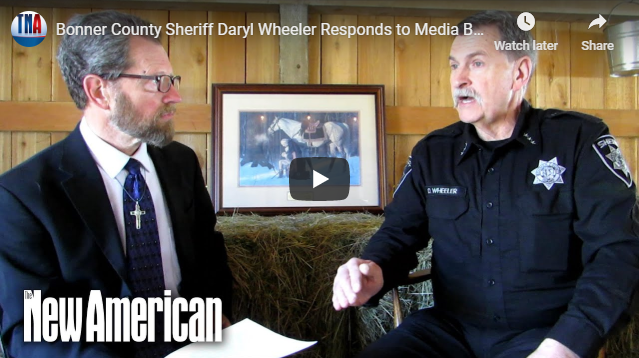 That Sheriff Wheeler’s very temperate letter to the governor would stir such intemperate responses from the left-tilted media and intolerant “progressives” is hardly surprising. But the rancorous and completely unprofessional, unethical statements made by supposedly rational medical personnel are especially troubling, as they demonstrate the dangerous extent to which the coronavirus hysteria has empowered thought police to censor and punish anyone who questions (no matter how reasonably) the draconian policies that are destroying our livelihoods and our liberties. The sheriff’s letter (see full letter below) — a mere three short paragraphs — attaches to a much longer letter by Florida businessman Alfie Oakes, who runs a thriving organic farming enterprise.

Sheriff Wheeler cites four key points made by Mr. Oakes: “1) The reliability of the information disseminated by the World Health Organization; 2) Our response to that information; 3) The cause and effect devastation caused by our response; and 4) Our responsibility to change course.”

He urged Governor Little to call up the Idaho Legislature (which is now in recess) for an emergency meeting so that various experts may testify, reasoned debate may take place, and appropriate measures may be adopted by the constitutionally-designated lawmakers, rather than being ruled by executive fiat. Sheriff Wheeler told The New American that it may not be necessary for the Legislature to physically assemble in Boise, and perhaps they could conduct the emergency session via a virtual platform such as Skype or Zoom. He noted also in his letter that Texas Governor Greg Abbott had already signed an executive order re-opening churches.

And, we note here, even New York Governor Andrew Cuomo, a far-left Democrat who has been hypercritical of President Trump on the coronavirus response, has called for re-thinking the extreme shut-down course that he and other governors have advocated and implemented. On March 25, Cuomo admitted that his stay-at-home orders were “probably not the best public health strategy,” and said the smartest way forward would be a public health strategy that complemented a “get-back-to-work strategy.” Which sounds remarkably close to the positions for which Sheriff Wheeler has been so roundly condemned.

There is a letter circulating around the nation in response to the COVID-19 crisis written by businessman Alfie Oakes. It brings up and questions many important points: 1) The reliability of the information disseminated by the World Health Organization; 2) Our response to that information; 3)The cause and effect devastation caused by our response; and 4) Our responsibility to change course.

In the spirit of changing the course, I am urging you to call up the full Idaho Legislature and assemble them for an emergency meeting in Boise to discuss these points. I do not believe that suspending the Constitution was wise, because COVID-19 is nothing like the Plague. We were misled by some Public Health Officials, and now it is time to reinstate our Constitution.

On Tuesday, Texas Gov. Greg Abbott changed his state’s course by signing an executive order giving churches back their right to assemble. In the spirit of liberty and the Constitution, you can request those that are sick to stay home, but at the same time, you must release the rest of us to go on with our normal business.

Dr. Robert J. Burnett’s letter attacking Rep. Heather Scott and Sheriff Wheeler — and threatening the prospect of withholding medical treatment for them, if they should need it — is quoted in full below.

Memo to Rep. Heather Scott: You are sickeningly wrong

I am sure that you are familiar with the saying “your right to throw a punch stops at my face.”

Fact: Coronavirus is deadly, and cases are present in Bonner and Kootenai counties.

Fact: Health care workers are 200-400% as likely to contract the virus.

Fact: CDC states that social distancing orders and stay-at-home orders will decrease the number of cases, and particularly, “flatten the curve” so that health care resources are not overwhelmed.

Fact: Models of North Idaho demonstrate that, if unmitigated, resources, particularly ICU beds and ventilators, will be overwhelmed.

Fact: Once overwhelmed, ethics committees have deemed that resources are prioritized based on profession (more specifically health care workers) followed by chance of survival, followed by age. Scarce resources are NOT allocated by political or social status, wealth or “first-served.”

Because you believe that the stay-at-home order is unlawful (which it is not, under state of emergency), and more importantly, have used your public office to encourage others to violate the order, you have put law-abiding citizens, and health care workers at increased risk of infection, hospitalization and death.

As such, your punch has reached my face. It is criminal that you would use your public office to threaten the health of your constituents and your local and regional health care workers. Similar to Bonner County Sheriff Daryl Wheeler, the entire medical staff at Kootenai Health is aware of this reckless behavior.

I realize that the pandemic is not much of a concern to those uneducated people who believe this threat is a “hoax” or “overblown,” but I want you to know that in the unlikely but possible event that either you or Sheriff Wheeler contract the coronavirus, and in the less likely event that you will require hospitalization, and even less likely but possible event that you would require a ventilator, that I, and all of my co-workers take comfort in knowing that, because of your behavior, you have essentially relinquished your claim to any of these potentially scarce resources. It’s probably for the better that a ventilator go to a health care provider anyway.

Please re-think your behavior and your actions and rescind your comments and requests. Health care providers are concerned that we have inadequate testing to know which of our patients are infected and inadequate PPE to protect ourselves through a surge. As such we would ask you to think of them/us, rather than yourself at this difficult time. You could possibly use your legislative power to help with the problem, rather than add to it.

If I, or any of my family acquired an illness a year from now, would you ‘do no harm’ to us? Why should anyone ever trust their health to someone who arbitrarily determines the application of the quality of medical treatment based upon a difference of personal opinion on your part?

I simply called for our Honorable Governor Little to call the Idaho Legislators back into session with the goal of debating the issue and the governor’s action to it. Legislators can call expert witnesses and determine the best path forward to preserve both our collective health, and our rights enshrined in our Constitution. I made no claim as to being a medical professional.

Thankfully my approach to carrying out the duties of Sheriff is not based upon a capricious nature, nor emotion. I and my deputies abide by the call of duty that this office receives 24/7/365. We place ourselves in any number of hazardous — including medical situations, daily and will continue to do so.

Dr. Burnett, we’re both first responders, and as such in facing the dangers of the unseen, we selflessly take that challenge for the sake and safety of those we respectively serve in our given professions. As a personal pledge to you, you will receive the same quality of service as any other citizen of Bonner County. I will be honored to serve you today, as I was my very first day in office.

Thank you for your consideration,

As of the time this article went to post, Kootenai Health, the employer of Dr. Robert J. Burnett, had not returned our call concerning his letter and any actions Kootenai Health may be taking in regard to his unethical politicization of medical care.