There will be Democrat Violence

There will be Democrat Violence

I never thought I’d see Americans become such indoctrinated automatons serving Marxism so easily. There will be Democrat Violence

The angry mob is angrier than ever, and if they lose any more ground, or they fail to steal each of the upcoming elections, there will be a violent civil war, not because gun-totin’ conservative Republicans started it as the leftists would have you believe, but because they won’t be able to contain their rage over any more obstacles in the way of their journey to their humanistic, anti-God, utopia.

Recently, an Ohio Democratic Party Representative and current Senate Candidate said that the Democrats need to ‘Kill and Confront’ the MAGA Movement.  The leftist calling for “killing” the opposition is Tim Ryan, who is running for Ohio’s open Senate seat, and who ran a 2016 presidential election campaign on the Democratic Party ticket.

Donald Trump and his supporters enrage Ryan, and recently he unleashed some hyper-partisan rhetoric about Donald Trump supporters that would be considered “incitement of violence” and “insurrection” if such words had been uttered by a Republican about the Democrat opposition and their allies.

Ryan’s exact words on MSNBC’s “Morning Joe” was that the “exhausted majority” needs to “kill and confront” the MAGA movement.

Majority?  The Democrats?  Hardly.  Especially in light of their latest series of authoritarianism and absolutely insane and unconstitutional policies.  As for being a moderate, in his answer to Willie Geist’s question about Ryan’s message to Ohio Republicans in this general election, Ryan was a big fat liar.

“I’m one of the most bipartisan members of Congress,” Ryan claimed. “The last two congresses, I have been in the top 10% of most bipartisan. I want to work across the aisle. Look, Democrats aren’t right on everything, and I’m willing to sit down and have conversations about how we can move out of this age of stupidity and into an age of reconciliation and reform. How do we fix all of these broken systems.”

Quick note: Federal Government’s authority does not exist for domestic issues, let the States and the people take care of their own business.

“Some of those answers will come from Republicans, not the extremists that we are dealing with every single day,” Ryan continued. “We’ve got to kill and confront that movement, but working with normal mainstream Republicans, that’s going to be really, really important.”

“I’m saying exhausted majority, Democrats, Republicans, Independents against the extremists, leading an era of reform around reconciliation so we can heal this country and move into the future,” Ryan added. “Again, I don’t have a billion-dollar donor to fund me. I need low-dollar people who can go to my website and chip in a couple of bucks and help us put this extremist movement to bed so we can move on with being Americans again.”

Donald Trump and the MAGA conservatives chase after something that Ryan would know nothing about; returning to the original intent of the U.S. Constitution.  To them, that’s an extreme position that must be “killed” and “put to bed.”  Only authoritarianism by the federal government, according to Ryan, is the mainstream and accurate way to proceed.

According to Becker News, Ryan is not the only one putting out vitriolic statements and incendiary remarks about the Deep State Establishment’s opponents, invoking violent imagery.

In an interview with MSNBC’s Chris Hayes in 2015, the Lincoln Project’s Rick Wilson said that “they’re still going to have to go out and put a bullet in Donald Trump. And that’s a fact.”

Becker News points out that during the second Trump impeachment trial, a powerful video was shown on the Democratic Party’s frequent use of violent rhetoric.

Biden administration has been constantly referring to the alleged “threat to democracy” posed by “MAGA forces.”

The Biden administration has been constantly referring to the alleged “threat to democracy” posed by “MAGA forces.” However, the political rhetoric that comes out of the Democratic Party is consistently more extreme, and occasionally even violent, than anything that comes out of the Republican Party — including MAGA supporters.

According to Townhall the chaos is only just getting started.

As we approach the final weeks before the 2022 midterm election determines which party controls Congress starting in 2023 Townhall has had crews covering consequential races in Arizona, New York, Texas, Florida, Pennsylvania, Georgia, Wisconsin, Alaska, Nevada, Ohio, and even Oregon, with more coverage to come of the races and polls that will define and shape the days remaining before the general election.

As conservative outlets like Townhall work to get to the truth, biased fact-checkers try to shut down the truth in order to protect Democrats and Republicans in Congress who may be selling out conservatives and our principles.

The Democrats are calling for Trump’s arrest to stop him, and the Democrats are conducting raids on Trump supporters, like Mike Lindell, using the might of the federal government against their opponents for political reasons.  A promise by the power players has already been made that the Department of Justice will be weaponized and used to go after anyone supporting Trump.

The game is not just about power.  It’s about enriching themselves at the expense of American Liberty.  Such was shown when Black Lives Metter Global Network Foundation board of directors member Shalomyah Bowers was recently accused by fellow activists of ripping off $10 million from the organization for his own personal use.

According to Post Millennial During a rally held in support of those currently being held prisoner over their roles in the January 6 situation at the Capitol building, counter protesters cheered for the death of Ashli Babbitt. Then, to show their violent, enraged lawlessness, as an officer rode by on a bike they turned on the police officer.

The leftist group was heard shouting expletives towards the officer, including “motherf*cker” and “piece of sh*t,” demanding to get his badge number.

“I’ll remember that, b*tch,” one woman shouted, after reading his badge.

“Little f*cking b*tch,” she continued. “Yo, get your dude… check your men.”

“You cannot obstruct a walkway you piece of sh*t.”

The group approached the protest at one point, remaining across the street and shouting “insurrectionists crying,” and “Trump is a loser, a little baby loser.”

If the left loses any bit of the election that puts their power in jeopardy the angry rhetoric will become enraged actions, as we saw during the 2016 Election, except worse.

What a bunch of mindless tools who do whatever they are programmed to do when the leftists demand it.  I never thought I’d see Americans become such indoctrinated automatons serving Marxism so easily. 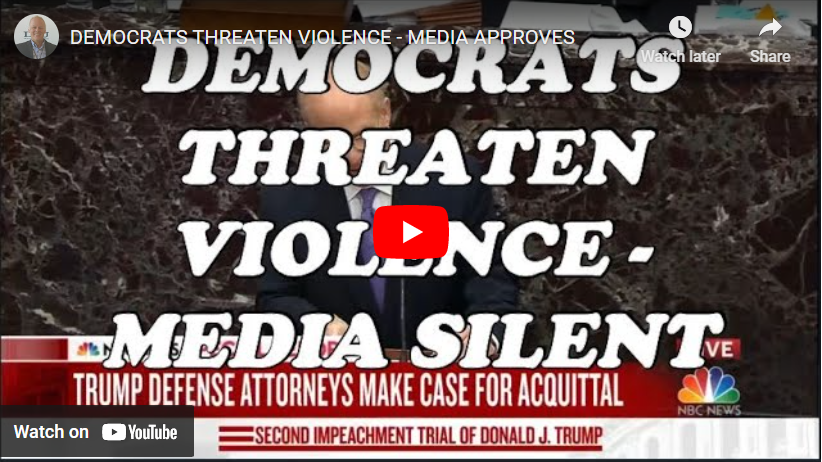