Biden Pick for Comptroller Likes Soviet Financial Planning. Wants to End “Banking as We Know It”

Biden Pick for Comptroller Likes Soviet Financial Planning. Wants to End “Banking as We Know It”

Forget about the “transgender woman” President Joe Biden hired to oversee the transition of the Defense Department.

Or the “transgender woman” he appointed as second-in-command at the Health and Human Services Department.

Or his Transportation Secretary, a man who thinks he’s married to a man.

The latest from China Joe is his pick for Comptroller of the Currency. Saule Omarova is a fan of Soviet economic policy. Critics call her an “actual communist.” 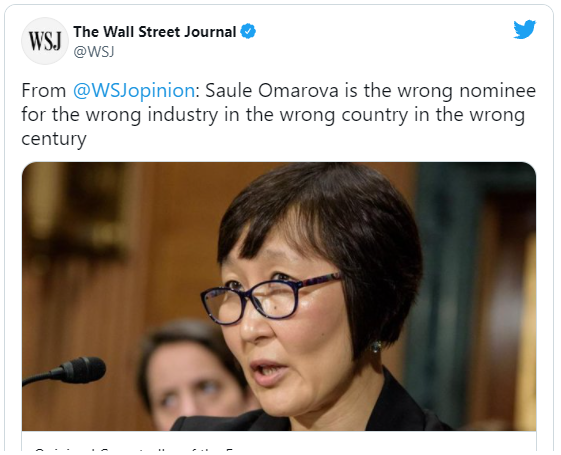 In USSR, No Wage Gap!

The Wall Street Journal delivered the dope on Soviet-born Omarova in an editorial.

China Joe “checked off another progressive identity box” when he nominated Omarova, the Journal observed. “ Some Trump appointees were ridiculed for having supported the elimination of their agencies. Ms. Omarova wants to eliminate the banks she’s being appointed to regulate.”

Born in Kazakhstan, SSR, Omarova graduated from “Moscow State University in 1989 on the Lenin Personal Academic Scholarship. Thirty years later, she still believes the Soviet economic system was superior, and that U.S. banking should be remade in the Gosbank’s image.”

The degree from MSU is probably nothing to hold against her. If she had graduated from Michigan State in 1989 she’d probably believe the same things. 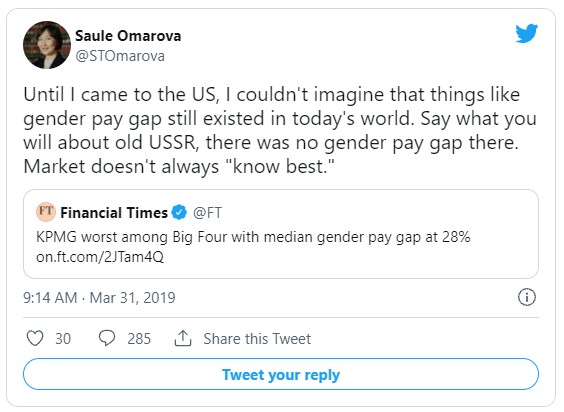 That, of course, depends on what one means by “market,” but in any case when “Twitter users criticized her ignorance, she added a caveat,” the Journal continued: 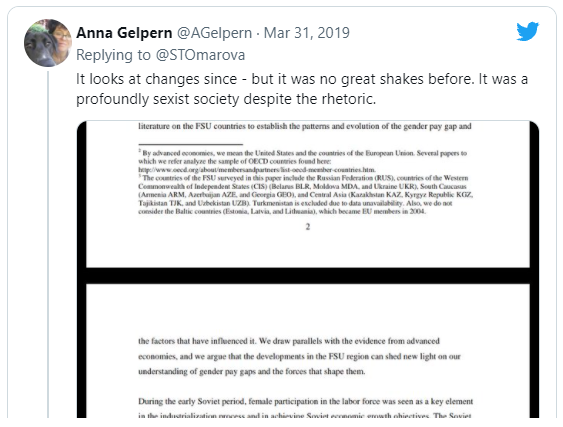 “Sure, there was a Gulag, and no private property, but maternity benefits!” the Journal quipped.

More seriously, “Omarova thinks asset prices, pay scales, capital and credit should be dictated by the federal government. In two papers, she has advocated expanding the Federal Reserve’s mandate to include the price levels of “systemically important financial assets” as well as worker wages. As they like to say at the modern university, from each according to her ability to each according to her needs.”

But that’s not all, the Journal noted:

Meanwhile, “highly-paid” eggheads would run the nation’s financial regulatory agencies, not least the Fed. And that bunch would be free from the “constraints and requirements of the administrative process.”

Yet Omarova’s open sympathy for communist financial planning isn’t her only disqualification. She apparently doesn’t know the “gender pay gap” — usually pegged at 77 cents, men over women — has been debunked time and again.

The data show that wages and salaries are about equal when the comparison is for men and women who work the same jobs and hours.

The imaginary 23-cent wage gap shows when the comparison does not account for the different jobs women do and fewer hours they work.

But don’t expect that to stop GOP senators from voting to confirm her. They just OK’d spending almost $70,000 per person to resettle almost 100,000 Afghan “refugees” in a neighborhood near you.

And she did work for George W. Bush, after all. She was a special advisor on financial regulations at the Treasury Department.