After Biden’s speech on his Afghan withdrawal, we discovered America has a helluva evacuation capability, while any mistakes were Trump’s fault, of course. But seriously, folks—the US is in an incredibly dangerous position regarding our safety and global security. Because, if America accidentally mishandled Afghanistan so badly, then we are unfit to defend ourselves or our allies. But if Kabul was purposely bungled, say to harm America’s world standing, we are also unfit as a world leader. Either way, Biden is unfit to lead and must be removed immediately, because he is functionally insane as our leader.

With an unfit leader at the helm of the world’s biggest security anchor, how can any of our allies sleep easy?

Imagine what would occur if China suddenly massed ships around Taiwan, what would Joe do? Using his same logic, Biden may give another…”it’s a new world” speech where each situation was unique, must be re-evaluated, and that we shouldn’t overcommit to our allies. Because in Biden’s new doctrine, US goes it alone when convenient, does not communicate with NATO allies, and decides which is the most efficient means of decommitment regardless of any past agreements. In other words, the US is now a complete free-agent, only worried about self-preservation. And with so many unknown variables about who’s really calling the shots and how our enemies might react to this opportunity, Heisenberg’s Theory of Uncertainty says “All bets are off!”

Problems abound here. But overwhelmingly, Biden increased the risk of international attacks on friends and our homeland by staging such a ragged, inchoate, disheveled and heartless abandonment of friends and citizens. Biden broke promises, ruptured treaties, donated massive weapons to enemies, left secret friend lists ensuring allies will be murdered, and abandoned trusting Americans with the wolves of the Taliban. If a dystopian movie started with such a premise, every emotion would be pushed for dramatic disaster. But how would it end?

The problem with Joe’s narrative of his Kabul logic was akin to liberal explanations for why a homeless person plundered a liquor store. It would have been easier to just state Joe is losing his marbles. But this remains a conundrum. With an unfit leader at the helm of the world’s biggest security anchor, how can any of our allies sleep easy? A world war could result from the lazy, self-centered and cowardly Biden Doctrine’s application. Therefore, Joe must be removed immediately, and let’s see how the rest of the game plays out. One step at a time, dear friends—one step at a time. 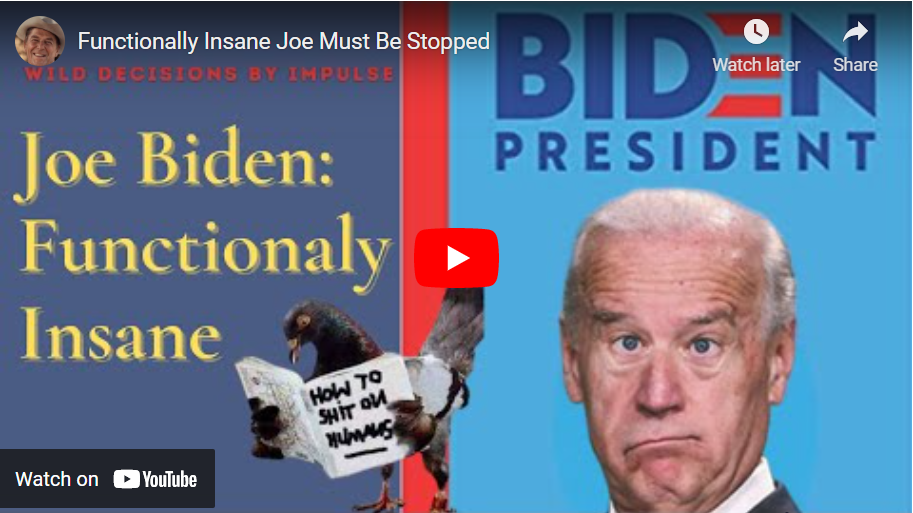