No one should be dazed that members from the press quickly jumped on Twitter to throw tantrums over Ada County commissioners voting to appoint Dr. Ryan Cole to the health board.

Dr. Cole is a pathologist in Boise and has been awfully scrutinized by the press for his opinions about masks, lockdowns and vaccines.

Audrey Dutton, who writes for the left-leaning Idaho Capital Sun, quickly tried to discredit Dr. Cole on Twitter. Dutton tweeted that Dr. Cole encouraged people to look at the Vaccine Adverse Event Reporting System (VAERS) when looking into vaccine injuries. Dutton in the past has sought to dismiss the VAERS website saying there’s no evidence that vaccines are harming people. Dutton also wrote an article following Cole’s appointment and said, “Cole has been criticized for spreading false information about COVID-19 and vaccinations.” It’s flummoxing that Dutton and other members of the press only claim doctors or other health officials are spreading “false information” about COVID-19 when it goes against their fear-selling narratives they call the “news.”

Melissa Davlin, who is an employee of the state of Idaho and works for Idaho Public Television responded to Dutton’s tweet, “One of the other things about VAERS reports: The site makes it very clear that the reports aren’t vetted by whether the vaccine actually caused the death or adverse effects. Those adverse effects include every random symptom imaginable, including ‘anger’ and ‘animal bites.’”

What Dutton, Davlin, and the rest of the media never seem to comprehend is that VAERS is a source that the public should reference before making the decision to get vaccinated. The VAERS site, which is managed by the CDC and FDA, has the ability to give more insight about potential risks that can occur after receiving the vaccine, something the media never wants to report about. The press holds a responsibility to release as much information as possible and let the public determine how they want to perceive such information.

Having the audacity to dismiss thousands of reports about vaccine injuries and downplay horrific sufferings is selfish, narrow-minded, and unprincipled. Dutton and Davlin’s excuse that there is no correlation between the vaccine and death or injury is asinine. It doesn’t take rocket science to do a simple process of elimination.

Heath Druzin, a freelancer who writes articles for Boise State Public Radio, posted a tweet calling Dr. Cole an “anti-vaccine advocate.” Druzin wrote, “Cole is an example of a trend of far-right candidates targeting local boards.” Earlier this year, Cole released a statement to KTVB stating, “He is not an anti-vaxxer and he believes that vaccines are a major medical advancement that has helped increase people’s life spans for the last 50 years.” The public should be made aware and also question Druzin’s professionalism due to his false claims against a well-respected doctor in Idaho. 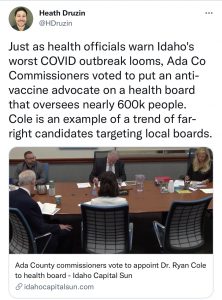 How can anyone take Dutton, Davlin, and Druzin as objective journalists when they publicly tweet biased opinions about current issues. When did it become acceptable for journalists to disregard being unbiased when reporting the news?

These are only a few of many journalists who continue to question Dr. Cole’s heroic work and studies during the pandemic. These so-called journalists today are nothing more than liberal activists who add a disservice to the community by spewing their biased narratives in every piece and tweet they compose.

IFF updated this article to reflect Druzin’s status as a freelancer for Boise State Public Radio.