There’s a reason the globalists have accelerated their plans to carry out planet-wide genocide against the human race: They know their remaining time in power is very limited, thanks to grassroots technology and mass awakening that will soon make their centralized control systems obsolete.

In effect, these technologies (and many others) take power away from central controllers and place that power back into the hands of individual citizens. As a stark example of this, consider the fact that common, low-cost 3D printers now allow end users to print functional gun parts such as lower AR receivers. This means the technology exists for common people to print firearms. (The technology is still rudimentary and complex, but it’s getting better each month.)

People want to be free. And they demand the freedom to speak. Censorship can only work for a short time, after which the backlash will unleash humanity’s greatest potential through freedom, creativity and abundance.

The globalists see all this coming, and in an effort to maintain their grip over the human race for as long as possible, they are now unleashing global genocide schemes to mass murder as many human beings as possible. Their current goal is to eliminate at least six billion living human beings in the name of “saving the planet.” Their tools include the covid bioweapon (funded by Fauci and Obama, built by the CCP using U.S. taxpayer money, in part), deadly vaccines (population control shots), economic devastation and FEMA camp mass executions (coming soon). If they can also manage to start World War III in the middle of all this, they can exterminate a few billion people from that effort alone.

This means our job is to survive the culling, defeat the terrorists who unleashed all this (the global elite) and restore human freedom with individual human rights, which spring from God (not government). See my explanatory graphic below for more details on that.

Today’s Situation Update covers all this and more, laying out the pathway for humanity to not merely survive the horrific evils that have been unleashed, but to thrive beyond the coming collapse. 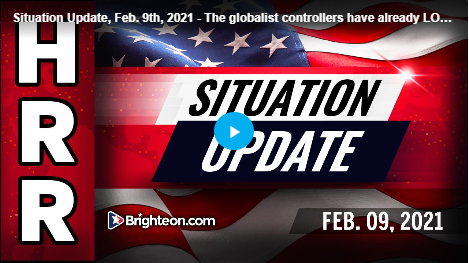