Former Attorney General Bill Barr admitted there likely was a coup to overturn the Donald Trump administration. No one was held accountable except for one minor player, Kevin Clinesmith, who was given probation. There was no justice.

Barr did not investigate election fraud allegations. If he had, the people who came forward would have been interviewed. None were. He also knew the massive mail-in voting would be corrupt. He said it was, and he did nothing to secure it.

As the administration was in the homestretch that last year, Bill Barr was noticeably absent. We now know the reason.

Former Trump adviser Peter Navarro appeared on Maria Bartiromo’s show on Sunday to explain what took place. In Trump’s last year of office, Barr “was really working against this President in a lot of ways.”

“Trump’s last Attorney General actually also turns out to be Joe Biden’s first Attorney General,” Navarro stated. “Because here is what was happening. We had over 30 executive orders queued after election day, ready to go. But we kept running into all of these roadblocks and roadblocks and hurdles. It turns out that Bill Barr’s office of legal counsel was fast-tracking these Biden EOs.”

Barr’s office fast-tracked Biden Executive Orders instead of pushing Donald Trump’s while Trump was in office.

“So, we had this beautiful order,” he went on. “One of the orders that Bill Barr helped Joe Biden do was to basically unwind that.”

“So, bad news there,” Navarro continued.

“And these executive orders, the bottleneck was at the Department of Justice, on so many things we did,” Navarro went on. “You see what President Biden is doing now, he’s just unwinding things that are going to come back to haunt the American worker, bigtime.”

Barr was missing because he was working for Joe Biden by that time, and had been the last year. 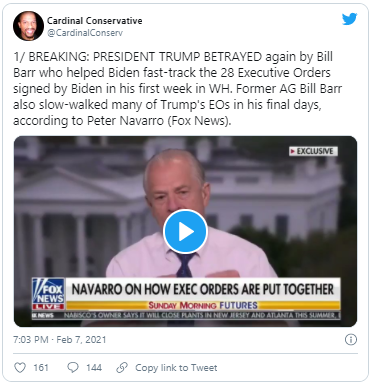 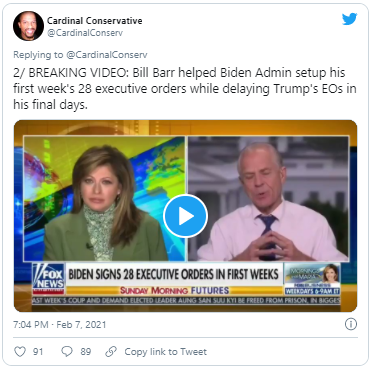 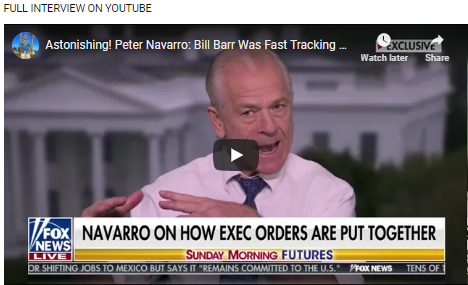