The false flag raid on the Capitol Building yesterday, led by Antifa and BLM operatives dressed as Trump supporters, set the stage to justify the final betrayal of America as Dems and Republicans voted to install Joe Biden as president, even after irrefutable proof of widespread election rigging and fraud across the swing states.

The Left is using the “storming” false flag event to whitewash all evidence of election fraud. Somehow, since people pretending to be MAGA supporters stormed the building, now the massive evidence of Biden’s overwhelming fraud and cheating no longer matters. The Left is once again pretending to occupy the moral high ground, even as they operate as criminals and scumbags.

In today’s Situation Update, we provide more details on the false flag attack and what it means for Trump’s remaining (shrinking) options.

Notably, the only reason Sen. Schumer and others are calling to immediately remove Trump from office under the 25th Amendment is because they know he is about to move against them and carry out what attorney Lin Wood describes as “mass arrests” of traitors.

“Many traitors will be arrested & jailed over the next several days,” Wood posted on Parler in the early morning hours. “President Donald J. Trump will serve 4 more years!!!”

Here are the highlights of what’s covered in today’s Situation Update, which is shorter than usual (just 37 minutes):

Listen to the full episode here: 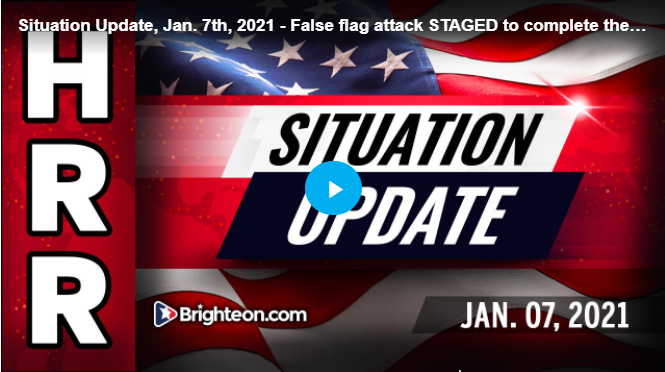 Hear a new episode each day at this channel: