Joe Biden may be the most pathetic U.S. Presidential candidate in history, and that’s saying a lot following two Hillary Clinton failed attempts. There’s simply no way for the Democrats to win the states where Trump won all of those electoral college votes that won him the election in a landslide in 2016 – unless … wait for it … they cheat like the cheating scoundrels they are.

Creepy Joe talks about really creepy stuff on the campaign trail, like how much he loves kids rubbing the hairs on his legs in the swimming pool, and how he knows about roaches, and how he can relate to Black people because he was once a lifeguard who took a six foot chain (and some razor blades he sharpened on the curb – you know, “the thing”) and threatened to wrap that chain around the neck of a black gangster named Corn Pop. You can’t make this stuff up.

Biden has all the qualities of a pedophile, rubbing on girl’s shoulders and sniffing their hair in public, during photo shoots, like he’s too big to fail. Maybe he’s just too stupid not to fail. Well, we will all know the answer to that in a few months. Watch the pedophile freak in action and remember, this guy wants to be the leader of the not-so-free world, soon. Maybe he’s sniffing for the coronavirus cure? 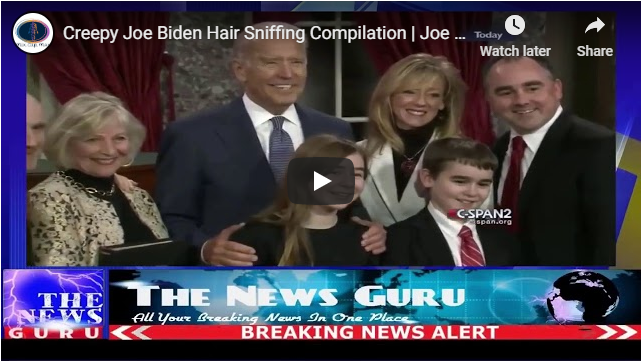 There’s no way a violent, embezzling, dementia-suffering pedophile could legitimately win the White House in November, unless of course, the whole thing gets rigged by mail-in votes. Folks, now you know what the lockdown is really all about. Get ready, because here it comes:

Democrats are notorious for engaging in election tampering by massive voter fraud and vote theft, just take a look at Florida in 2016 and 2018

We all remember when Democrat-saturated counties in Florida, Palm Beach and Broward, out of the blue found thousands of “additional ballots” back in 2016. Democrat operatives at those precincts were caught on video, after voting deadlines had passed (nearly 2 days later), driving moving trucks full of “lost ballots” back to the office, after they had dumped all the Republican ones.

Thousands of magical votes kept coming in, mostly during the overnight hours, that chipped away GOP leads, until the Democrats finally cheated their way into office. The Broward county supervisor and their elections department literally have a history of breaking the law. Obama never cracked down on any of it, because it all helped the damned Dems, and the fraud was nearly all vote-by-mail driven. The court even found that they had destroyed ballots in 2016, thus violating federal and state laws.

Tune your internet dial to Preparedness.news daily, because let’s face it, it’s not a matter of “if” the SHTF, it’s when will the SHTF, and you better be ready. Ain’t nobody making fun of people who stock up on food, ammo and toilet paper anymore, huh?