Tyranny thrives on fear, and fear is usually based in large part on ignorance. We fear the things we don’t understand and the things we can’t see. When it comes to the current pandemic, we can’t see the pathogen, and, generally, most people don’t understand it. Moreover, most people don’t understand how a normal human immune system works and responds to a bacterial or viral invader. Because of this fear and lack of knowledge, opportunistic politicians have seized on the chance to impose ever-more-ridiculous restrictions on human activity. And because people are afraid of what they don’t understand, a compliant populace has rolled over to the imposition of authoritarian rule. Safety at all cost, from the phantom pathogen, is being used to wage war on the rights of the people. Fear, to paraphrase Randolph Bourne, is the health of the state.

Facts and understanding are the vaccines that are needed to fight off the virus of totalitarianism that is now infecting the world. And a devastating recitation of facts is just what has been provided by two doctors from California in a pair of videos, one of which has been censored by YouTube after having received 5.46 million views, but not before being posted on other channels (video below).

Drs. Daniel W. Erickson and Artin Massihi are co-owners of Accelerated Urgent Care in Bakersfield, California. Combined, they have more than 40 years of hands-on experience in providing medical care and in treating viral infections and respiratory illnesses. Today, they are a primary provider of tests for COVID-19 in their county, having performed several thousand such tests. In a lengthy “briefing” interview with the local ABC television affiliate channel 23 in Bakersfield, they provide the facts and data that demonstrate that the lockdowns are not needed and may, in fact, be counterproductive.

According to Dr. Erickson, first of all, the models that predicted doomsday scenarios and were used as justification by political figures for the lockdowns have proven wildly inaccurate. Actual data proves that the infection is very widespread, making death rates considerably lower than predicted by the models preferred by public health politicians and bureaucrats.

That’s a low number, Dr. Erickson notes. And it’s the same thing elsewhere. “The more you test, the more positives you get, the prevalence number goes up, and the death rate stays the same, so it gets smaller and smaller and smaller,” he remarks. “And as we move through this data what I want you to see is millions of cases, small amount of death. Millions of cases, small amount of death, and you will see that in every state.”

Critics argue that this outcome is due solely to the role of mitigation, of social distancing, of masks, and of the lockdowns in general. But, Erickson notes, we have data that calls that conclusion into question.

That data comes from a comparison of outcomes in Sweden, which did not lockdown the country, and next-door Norway, which did institute lockdown measures. Comparing these two Scandinavian nations, Dr. Erickson noted:

When you bring up a system of lockdown you automatically have to compare it to system of no lockdown. Sweden and Norway. Norway has lockdown, Sweden does not have lockdown. What happened in those two countries? Are they vastly different? Did Sweden have a massive outbreak of cases? Did Norway have nothing? Let’s look at the numbers. Sweden: Sweden has 15,322 cases of COVID. They did 74,600 tests, which is 21 percent, similar to the other countries, 21 percent of all those tested came up positive for COVID. What’s the population of Sweden? About 10.4 million. So if we extrapolate out the data, about 2 million cases of COVID in Sweden. They did a little bit of social distancing, they would wear masks and separate, they went to schools, stores were open, they were almost about their normal daily life with a little bit of social distancing. They had how many deaths? 1,765. California has had 1,220 with isolation. No isolation: 1,765. We have more people — what I’m getting at is millions of cases, very small death. Millions of cases, very small death. This is what we’re seeing everywhere. Norway, its next door neighbor, this is where I come from. These are two Scandinavian nations, we can compare them as they are similar. Let’s look at the data. Norway: 7,191 cases of COVID. Total COVID tests: 145,279. So they came up with 4.9 percent of all COVID tests were positive in Norway. Population of Norway: 5.4 million. So if we extrapolate the data as we have been doing, which is the best we can do at this point, they have about 1.3 million cases. Now, their deaths as a total number were 182, fairly small, but statistically insignificant from 1,700, you realize. Millions of cases, small amount of death. 1,700 [or] 100, these are statistically insignificant. So you have a .003 chance of death as a citizen of Norway, and a 97 percent recovery. Their numbers are a little bit better. Does it necessitate shut down, loss of jobs, destruction of the oil company, furloughing doctors? That’s the question I have for you.

In this analysis, Drs. Erickson and Massihi are not alone. Other health professionals and researchers, too, are questioning the necessity of the lockdowns or the wisdom of the authoritarian response. These include Dr. Knut Wittkowski, former head of Rockefeller University’s Department of Biostatistics, Epidemiology, and Research Design; Dr. David L. Katz, former president of the American College of Lifestyle Medicine; and Professor Johan Giesecke, an epidemiologist who was first chief scientist of the European Center for Disease Prevention and Control, among several others.

Intriguingly, Erickson and Massihi go further, arguing, as did Dr. Wittkowski, that the lockdowns will be counterproductive. Why this might be so is related to how the immune system functions.

Like much of biology, human physiology is wonderfully complex, and the immune system, considered on its own, is a marvel of biochemical engineering. Elaine N. Marieb, in her text Human Anatomy and Physiology, describes the immune system as a marvel “which stalks and eliminates with nearly equal precision almost any type of pathogen that intrudes the body.” While the immune system has mechanisms for general defense, ultimately it works to best effect only when it has learned what it must fight. The immune system “must ‘meet’ or be primed by an initial exposure to a foreign substance (antigen) before it can protect the body against that substance,” Marieb writes.

One way it does this, where viruses are concerned, is through the production and release of proteins that help cells defend themselves against viral invasion. Regarding this aspect of immunity, Marieb writes:

Viruses — essentially, nucleic acids surrounded by a protein coat — lack the cellular machinery to generate ATP [adenosine triphosphate, a molecule with a key role in powering cell activity] or synthesize proteins. They do their “dirty work” or damage in the body by invading tissue cells and taking over the cellular metabolic machinery needed to reproduce themselves. Although the virus-infected cells can do little to save themselves, they can help defend cells that have not yet been infected by secreting small proteins called interferons. The interferon molecules diffuse to nearby cells, where they stimulate synthesis of other proteins, which then inhibit, or “interfere” with, viral replication in those cells. Interferon’s protection is not virus-specific (i.e., interferon produced against a particular virus protects against a variety of other viruses.)

Thus, exposure to viruses in the environment tends to make the human immune system more effective against other viruses. This lesser-known response to viruses helps the body’s immune system as it prepares a defense against specific pathogens. This latter response provides adaptive protection against specific invaders and, as the body has learned what those invaders are, provides longer-term immunity against them. Collectively, when this happens among many people in the wider population it creates what is known as “herd immunity,” a key element in bringing an end to an epidemic.

For their part, Drs. Erickson and Massihi point out that the lockdowns, by keeping people inside and away from more biologically complex environments, may reduce the immune system’s effectiveness because of reduced exposure to pathogens that may stimulate immune activity.

“The immune system is built by exposure to antigens: viruses, bacteria,” Dr. Erickson noted. “When you are a little child crawling on the ground putting stuff in your mouth, viruses and bacteria come in, you form an antigen antibody complex.… This is how your immune system is built. You don’t take a small child, put them in bubble wrap in a room and say, ‘go have a healthy immune system.’ This is immunology, microbiology 101. This is the basis of what we’ve known for years. When you take human beings and you say, go into your house, clean all your counters, Lysol them down. You’re going to kill 99 percent of viruses and bacteria. Wear a mask. Don’t go outside. What does that do to our immune system? Our immune system is used to touching. We share bacteria, staphylococcal, streptococcal bacterium, viruses, we develop an immune response daily to this stuff. When you take that away from me my immune system drops. As I shelter in place, my immune system drops. You keep me there for months, it drops more. And now I’m at home hand washing vigorously, washing the counters, worried about things that are indeed what I need to survive. Let’s follow the science. This is immunology, folks. This is microbiology. This is what we’ve combined together, we have 40 years of experience in this. This is common sense immunology.” 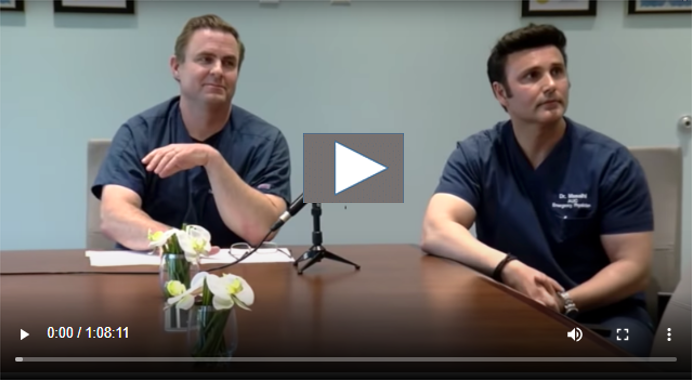 The opinions of these doctors, of course, is a direct challenge to the prevailing coronavirus orthodoxy. So it is no surprise that the statist guardians of that orthodoxy have reacted, criticizing the doctors from one direction, while silencing them from another.

The criticism has come from two physicians groups, the American Academy of Emergency Medicine (AAEM) and the American College of Emergency Physicians (ACEP). In a statement, the two groups said they “jointly and emphatically condemn” the opinions of Drs. Erickson and Messihi. “These reckless and untested musings do not speak for medical society and are inconsistent with current science and epidemiology regarding COVID-19,” the organizations said.

As the two medical groups were announcing their criticisms of the doctors, YouTube decided to censor them altogether, in a move that will surprise no one. According to ABC 23, the news channel that interviewed the doctors, “YouTube pulled a 23ABC video recording of Drs. Erickson and Messihi speaking. The video was one of two parts of the press conference uploaded to YouTube.”

The station also noted that they had asked YouTube to reconsider their censorship of the doctors.

“23ABC has appealed to YouTube to have the video re-uploaded,” the station said. The video has been posted on other YouTube channels, however, and can still be viewed — for now.