Jay Inslee has helped Washington state forge deeper economic and political entanglements with the communist government in CHINA than any other state in the union. According to Greater Seattle Partners’ CEO Brian P. McGowan, “Our connection to China is critical to the greater Seattle economy. More than two dozen Chinese businesses already have a presence in our region, and China is the second-fastest-growing source of foreign direct investment in the U.S. Much of that focused in the Puget Sound area.”

It is not just a coincidence that countries with the most severe outbreaks of coronavirus, such as Iran, Italy, Spain, S. Korea, France, Germany, and the U.S., also have the strongest economic and diplomatic ties with CHINA.

During President Xi’s visit to Washington state in 2015, Gov. Inslee signed a memorandum of understanding with Beijing’s Ministry of Commerce (MOFCOM) “to promote sub-national collaborations with several Chinese provinces, and a cooperative agreement with Guangdong Province to collaborate on mutually beneficial economic relations.” According to the Washington State Department of Commerce, the aerospace sector alone, “accounts for about $10 billion in Washington exports to China.” 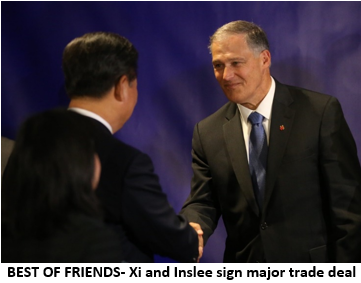 The novel COVID-19 coronavirus outbreak wasn’t publicly disclosed by the Chinese authorities until December 31, 2019. Communist authorities likely knew they had an urgent problem at least a month or two earlier (Oct.-Nov.) but chose not to disclose the information. Meanwhile, Washington state sent two major delegations to China in October 2019, and again in November, 2019.

Washington state is recognized as ground zero for the COVID-19 outbreak here on American soil. “Patient zero” was diagnosed in Seattle on Jan. 19, 2020, a mere four days after returning from a family visit to Wuhan, China. While “Patient zero” was the first person to be diagnosed in the U.S. with the novel coronavirus, there is no way of actually knowing if this patient was the first person to carry the disease into the United States or not.

It is now widely recognized that Trump’s decisive action slowed the spread of the coronavirus and saved American lives. In stark contrast to Trump’s action, Governor Inslee’s most recent statement issued Jan. 31, 2020, accuses President Trump of racism and xenophobia. According to the governor, Trump’s decision to impose travel restrictions is, “a clear attempt to restrict immigration based on race and religion, under the guise of national security.  Rather than making America safer, this decision further undermines key international relationships and hurts our ability to fight extremism abroad.” Obviously, Gov. Inslee places more value on political correctness and maintaining ties to China than on saving American lives.

Washington state has actively engaged in business dealings with China that, while they may be economically beneficial in the short term, are likely to cause “unjustifiable chaos and cruelty” in the long term.

The China Challenge: Washington Would Be a Major Casualty in a Trump Trade War