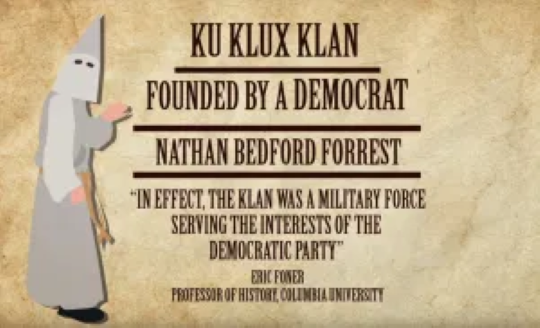 Editor’s note:  This article was published by us 3 years ago and it’s message begs being re-published at this most critical time in our republic’s history.  Democrats need outing at every opportunity today as Steven Neil authenticates.

Following their defeat in the Civil War, Democrats in the South simply shifted their priorities from defending slavery to the suppression of Republicans and African-Americans, by forming the Ku Klux Klan and other white supremacist groups. The KKK operated as a loosely structured group of political and social terrorists. Their goal was the political defeat of the southern Republicans and the complete domination of the newly liberated African-Americans.

In order to do this, the KKK used lynchings, beatings, shootings and intimidation to keep the African-Americans and Republicans from voting and being elected into office. Started by former Confederate General Nathan Bedford Forrest in 1866, the KKK was so successful in dominating the southern African-Americans that the southern states would remain a Democratic stronghold until the late 1960’s.

In an interview with a Cincinnati Commercial correspondent, General Nathan Bedford Forrest said of the KKK in 1868: “It is a political military organization, it was found that political matters and interests could best be promoted within it, and it was then made a political organization, giving its support, of course, to the Democratic Party.” So the lynchings, shootings and other terror tactics were done to promote the Democratic Party.

In 1871 Shaffer Bowens, a white former KKK member gave testimony in court about the goals and activities of the KKK. “My understanding was, to advance the Democratic Party and put down the radical party. … By killing, and whipping, and crowding out men from the ballot-boxes.”

Wilmington, North Caroline in 1898 was a prosperous town with a largely African-American population and led by a predominantly Republican leadership that supported their rights. The former democratic heads of the city however were determined to retake the city in the upcoming election.

Prominent Democratic leader Daniel Schenck, warned: “It will be the meanest, vilest, dirtiest campaign since 1876. The slogan of the Democratic Party from the mountains to the sea will be but one word … Ni**er.”

The day before the election, U.S. Congressman Alfred Moore Waddell spoke to his fellow Democrats: “You are Anglo-Saxons. You are armed and prepared, and you will do your duty. Be ready at a moment’s notice. Go to the polls tomorrow, and if you find the Negroes out voting, tell him to leave the polls and if he refuses kill shoot him down in his tracks. We shall win tomorrow if we have to do it with guns” In the same speech he also stated: “that they should, if necessary, “choke the Cape Fear with carcasses.”

Following the election, Waddell formed a mob of over 2,000 people to terrorize every African-American and Republican they could find, eventually killing somewhere between 25 – 300 people (no accurate count has been established), banishing hundreds and burning down a large section of the town. Not content with the murders and destruction, Waddell would oust the mayor and all Republican’s City office holders in what was really a coup d’état.

In the aftermath, thousands of African-Americans and Republicans left the area giving control of the city back to the Democrats. The Democrats then altered the voting requirements in the state preventing African-Americans from voting again until the passing of the Voting Rights Act of 1965. Alfred Waddell became the new mayor of Wilmington, a position he held until 1905.

Democrat Governor of Georgia, Hugh M. Dorsey wrote a letter to the NAACP in 1918 defending the lynchings of Hayes Turner and his eight month pregnant wife, Mary. Writing: “I believe that if the Negroes would exert their ultimate influence with the criminal element of their race and stop rapes that it would go a long way towards stopping lynchings.”

The Democrat Party: A History of Anarchy – Part 3

The Democrat Party’ A History of Anarchy –  Part 4