Video of Police escorting chartered Antifa buses in D.C. ahead of Jan. 6 Trump rally + more articles & videos on the truth of Jan 6th 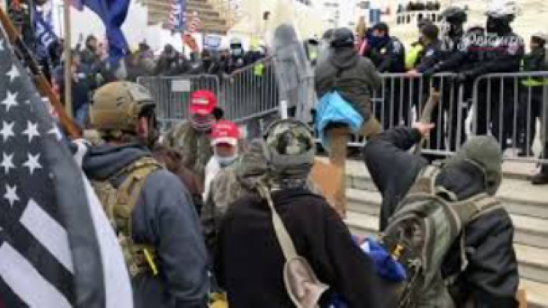 Editor’s note:  This was originally published on Jan. 7, 2021 and we feel it is important to re-run it at this time to substantiate that far left provocateurs were definetly inciting the Jan. 6th’s staged ‘riot.’  Notice the helmets, backpacks, masks, protective clothing or shields.  Know any Trump supporters like that?

Video of Police escorting chartered Antifa buses in D.C. ahead of Jan. 6 Trump rally + more articles & videos on the truth of Jan 6th

A shocking video has surfaced – watch below – that shows law enforcement in Washington, D.C., escorting chartered Antifa buses into our nation’s capital just days before the scheduled Trump rally on Jan. 6.

This same footage was uploaded to YouTube before being quickly removed, by the way. Thankfully, we were able to capture and upload it to Brighteon.com before it disappeared. Watch for yourself as patriots in D.C. show how the police, whom many conservatives support, side with leftist extremists who are presumably being bused in to wreak havoc and inflict violence on supporters of President Donald Trump. 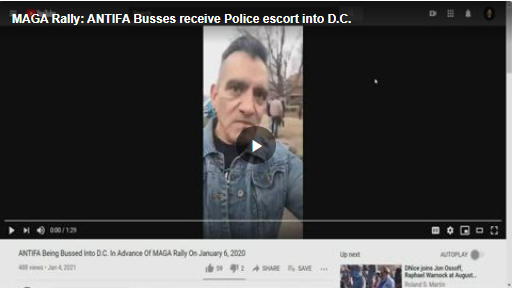 The first part of the video is from NewsClips, which wanted to draw attention to the footage at the latter portion of the video. Since those who captured it have smaller followings, NewsClips is aiming to get the word out, as are we, about what could be brewing in the capital.

“There was actually five vehicles total – three upfront, two in the back – they escorted right here, waited for them to get off their buses, then state troopers unloaded and took their positions.”

Another man then responds that each of the buses is labeled, adding that “they’re all paid charter buses.”

“They escorted them here!” shouts another, referring to the police officers who were complicit in rolling out the red carpet for Antifa just days before the D.C. Trump rally.

Please pray for patriot protection in D.C. this week

As you may recall, President Trump back in the summer declared Antifa to be a domestic terrorist organization, which means the “thin blue line,” at least in D.C., has joined up with terrorists in the fight to steal the election for Joe Biden.

Our hope is that nothing becomes of this Antifa convergence, and that the scheduled Trump rally is safe and successful. With police backing, however, there is no telling what Antifa might try to do as it is emboldened with the support of the state to act as aggressors against those who are gathering in the District in support of the republic.

While it is certainly within the realm of possibility that those who captured this footage are mistaken as to the true identities of those on the chartered buses – why would they be clearly labeled as Antifa? – the arrival of these vehicles with a police escort is ominous.

“We already know that these people are being well-funded for their activities,” states the NewsClips host towards the end of the clip about Antifa’s deep state backing.

Without knowing for sure what might be brewing, we are asking our readers to pray for safety, not only for the president but also for the tens of thousands, if not millions, of people who will be present in D.C. on the 6th to support him.

Also pray that justice will prevail, and that the fraudulent election will be overturned and restored to its rightful winner: President Donald Trump.

“Why should anyone be surprised by the Stasi escorting Bowser’s storm troopers in?” asked one Brighteon.com commenter, noting that D.C. Mayor Muriel Bowser has been working overtime to raise hell against the Trump supporters who are converging in D.C. as you read this.

“Donna Brazile’s [partner in crime] is as far left as it gets without going to jail!”

For more related news about the fraudulent 2020 election, be sure to check out Trump.news.

Busted! ANTIFA Changing Into Trump Gear At The Capitol

Sources for the top article include: