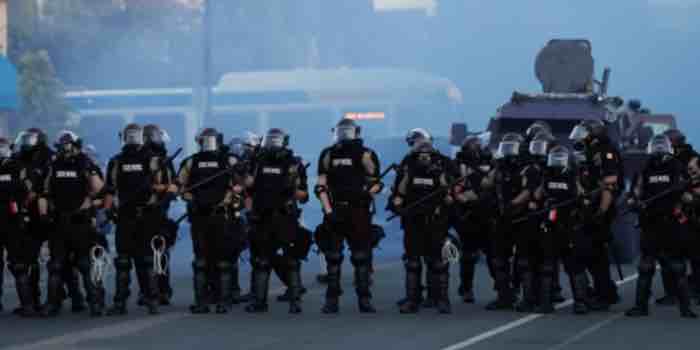 Democrats are determined to transform this nation into one-party socialist police state any way they can. This is not politics as usual

Supreme Court Justice Antonin Scalia made headlines nationwide on February 3, 2014, after bluntly telling law students at the University of Hawaii that internment camps to detain Americans would eventually return. Acknowledging that the infamous Supreme Court-approved internment of Japanese-Americans in wretched camps during World War II was wrong, the conservative-leaning justice followed up by adding that “you are kidding yourself if you think the same thing will not happen again.” In “times of war,” Scalia said, citing a Latin expression attributed to Cicero, “the laws fall silent.”

Has our government ‘declared’ war on its own people, its political opponents?

Scalia believed that in a ‘time of war’ the United States would round up citizens and place them in detention camps.  Scalia also referred to Obama that claimed he had the power to secretly murder US citizens without trial.

What is a ‘time of war’ and are we living in an emerging police state?  There was a time when wars were declared by Congress not by presidents. General Douglas MacArthur complained that the ‘Korean Conflict” was half war with no clear road to victory, saying…“There is no substitute for victory.”  Soldiers who died were not half dead.  They were just dead.  How many wars have we fought with no declaration of war?…the Korean war, Vietnam War, the War on Terror, including the Iraq War, Afghanistan, the Gulf War, all totaling 102,000 dead soldiers, and 208,000 wounded.  That is a lot of dead and wounded for ‘peacetime.’

We have made war much too easy and much too prolonged.  We start a conflict and never seem to want to end it.  And when we do end it, we find we have gained little or nothing and lost much.  Of course, the military industrial complex is happy, as President Eisenhower warned would be.

Now we live in a time when politics dictates war.  Our president talks repeatedly of White Supremacy, domestic terrorism.  Where is all of this white supremacy?  Is just being White domestic terrorism?  Has our government ‘declared’ war on its own people, its political opponents?

The early signs of a police state are here:

During the Obama administration $400 million was given to Haliburton to build detention centers.  Obama was quoted as saying they were being built for ‘prolonged detention’ of those that might commit acts of terrorism.

Did the early release of thousands of prisoners in the last several years make room for political prisoners?

Precedent is a powerful tool in government.  What may or may not have been appropriate decades ago can still be used for something totally inappropriate today. The internment of Japanese-Americans was indeed inappropriate, but it can be used to conduct detention today.  The Biden administration has repeatedly announced that our greatest enemy is home-grown domestic terrorism and White supremacy.  Who are these terrorists?… political opponents, Trump supporters, Republicans?

Former CIA Director Michael Hayden has described the GOP as not only dangerous, but contemptible.  Just over a week ago, Democrat adviser, Kurt Bardella called all Republicans a “domestic terrorist cell.”  A writer for The Atlantic, likened the Republican Party to a “dagger pointed at the throat of American democracy.”  Numerous Democrats and news media personalities have accused Republicans and Trump supporters as being a ‘threat to our democracy.’  FBI Director Christopher Wray likened the American “Don’t Tread On Me” flag as being suspect of violent extremism. One would think a president is an arbiter of political sides, but Biden calls the MAGA movement semi-fascism.  Is this language healthy in the democracy they pretend to want to protect?  What is to stop them from declaring open war on their political opposition?  Have they done it already?  Is civil war on their agenda?

The Dems built up the Jan 6 demonstration to sky-high levels.  All it took to turn a peaceful demonstration against itself was to turn down the offer by President Trump for additional security, have only 25% of the Capitol Police force on duty in and around the Capitol, open the doors of the Capitol building inviting the demonstrators in, put a bunch of BLM and Antifa anarchists into the crowd to stir things up, and shoot a protestor to show calamity.  And there you have it, a wall around the capitol, thousands of troops to underline the ‘danger to democracy’, and dozens of people languishing in prison without trial, with some dying by suicide.

In a side note, it has been revealed that the Capitol Police Department was warned in an internal memo that BLM hoodlums, dressed as Trump supporters were being bussed in from Baltimore. FreedomWatch

The Democrats tried legislation.  They passed a bill in the House (223-203), The Domestic Terrorism Prevention Act.  Republicans did block it in the Senate with a 47 – 47 vote, failing to gather the 60 votes needed to pass.

In the mean-time, Democrats are working hard to intervene in Republican primaries, pouring money into candidates they feel can lose to Democrats in the general. The two parties did try to come up with measures that would make elections more secure, but failed to do so.  It seems the only measure that Democrats would agree to was a federal takeover of elections…totally unconstitutional…nothing new for Democrats. I can only imagine their proposals…eliminate the electoral college, more ballots boxes, mail-in voting, no ID required…everything they depend on to win.

Politics is like a sporting event… you win some, you lose some.  But, what if one political party is no longer willing to lose?

So, are we at war and do we indeed now have a police state?  It depends on what the Democrats want and can’t get through legitimate means.  Democrats are determined to transform this nation into a one-party socialist police state any way they can.  This is not politics as usual.