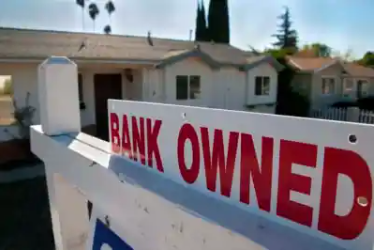 A foreclosed home shows a bank-owned for sale sign.

Big investment companies are buying houses at high prices and renting them out, squeezing would-be homeowners. They are a growing monopoly that will destroy the American Dream of homeownership if gone unchecked.

Unfortunately, we don’t have political leaders who are willing to put limits on monopolies.

The same thing that happened to our corporate media is also taking place in the sale of homes. Only six corporations own most of the media. As a result, we have corrupt activist media. Wall Street is now beginning to do something similar to housing in the United States. It looks like the monopolies and money trusts of the early 1900s.

The combined assets of BlackRock, Vanguard and State Street account for about 82% of the S&P 500’s market capitalization, about 25% of shares that voted in director elections at S&P 500 companies in 2018, and 73%-80% of global ETF assets, ThinkAdvisor reports.

The biggest U.S. asset managers today pose threats to the U.S. economy and financial markets, according to a new report from the non-profit American Economic Liberties Project.

The report, “The New Money Trust: How Large Money Managers Control Our Economy and What We Can Do About It, focuses on what it calls the “Big Three” asset managers — BlackRock, Vanguard, and State Street.

Combined, they manage over $15 trillion in global assets. That is equivalent to more than three-quarters of U.S. GDP and more than three times the GDP of Germany.

“The outsized footprint of a few large financial companies poses new issues for the governance of corporate America, the competitiveness of our economy, the concentration of political power, and the stability of financial markets,” writes author of the report Graham Steele.

It gives them outsized influence.

THEY’RE STARTING TO BUY UP HOMES – THE AMERICAN DREAM

We now have large corporations buying up single-family homes. While they still only own 2% of single-family rentals, they are moving in on the market.

According to John Burns Real Estate Consulting, in the first three months of this year, nearly a quarter of all homes sold in the United States were going to investors.

That’s a broad umbrella that covers everything from mega institutions to individuals buying vacation homes, but BlackRock (BLK), JPMorgan Chase (JPM), and Goldman Sachs (GS) were among the big-name buyers.

The New York Post reports that buying up single-family homes to rent has become so common that, while the phenomenon “didn’t exist a decade ago,” corporations bought one out of every 10 suburban homes sold in 2018.

Corporate homeownership can not only subject tenants to higher living costs, but often destroys their ability to buy these homes themselves, as companies pay top dollar to take them off the market.

As a result, America is quickly becoming a renter nation. While corporations only own about 300,000 homes so far, it is the “tip of the iceberg says Ryan Dezember in his new book, “Underwater: How Our American Dream of Homeownership Became a Nightmare”

“Home-price appreciation has historically been how Americans achieve financial prosperity,” Dezember writes. “Unlike stocks and bonds, ownership of which is concentrated at the top, houses are widely held. Roughly half of the housing wealth is owned by America’s middle class.”

The corporate bonanza really took off in 2011, when Morgan Stanley issued a report called “A Rentership Society.” With over 1.6 million foreclosed homes in the United States and more on the way, the report forecast “a surge in the number of renters and a potentially massive opportunity for investors to convert the glut of repossessed homes into rental properties.”

America’s investment managers were all in. By 2012, “more than $1 billion had been raised by investors for the purpose of doing just that. Some of the biggest names in finance were hoarding houses.”

Individual investors were soon mostly gone or absorbed into larger companies with investors like Warren Buffett, KKR of “Barbarians at the Gate” fame, and investment behemoth The Carlyle Group.

According to a recent report from the Wall Street Journal, roughly 200 investment firms are buying tens of thousands of homes — and sometimes entire neighborhoods — raising prices, and competing with middle-class Americans looking to take advantage of low-interest rates and buy their first home.

In January, D.R. Horton Inc. purchased an entire subdivision in Conroe, Texas, built 124 houses, and then put the entire neighborhood on the block. The winning bid for $32 million dollars came from Fundrise LLC, an online real estate investing platform.

A combination of investors swooping up single-family houses to rent out or flip, some of the lowest interest rates in history, and a housing shortage has caused home prices to surge, pricing normal people out of being able to purchase a home.

After the 2008 financial crisis, investors snapped up tens of thousands of foreclosed homes and rented them out. After testing his plan out on three different houses in three different markets, Billionaire B. Wayne Hughes dispatched deputies to buy tens of thousands more across the U.S. Hughes’s company American Homes 4 Rent now owns about 53,000 suburban houses in 22 states and collects about $1 billion in annual rent from tenants. His plan paid off big. While millions of Americans were underwater – owing more on their mortgages than their homes were worth – investors accounted for about a third of sales in many markets.

This trend of corporations buying up homes is exacerbating the shortage of houses for sale, driving up prices, and putting homeownership out of reach for many first-time buyers, the biggest losers in today’s market.

About 2.5 million households shopping for a first home will be shut out of the market this year, estimates Nadia Evangelou, senior economist with the National Association of Realtors. That amounts to 15 percent of all first-time home buyers. In an already daunting market, investor purchasing is adding to the obstacles.

There are issues for renters when it comes to big corporations. Various studies have found that corporate landlords are more likely to raise rents, evict their tenants and poorly maintain their properties than smaller landlords. One by the Department of Housing and Urban Development in 2018 found that large corporate owners in Atlanta were 68 percent more likely than smaller owners to file eviction notices.

Real estate analytics firm Green Street estimates that single-family rental values in the United States are 15% above their pre-Covid level. Renting out single-family homes is expected to deliver annual returns for private investors in the next three years of 6.8%, compared with 6.1% for apartments, 6.3% for industrial properties, and 6.4% for malls, Green Street said in a July report.

Corporations are destroying America. This all works quite well with The Great Reset which the biggest corporations have bought into. Someone needs to step in. We need another Theodore Roosevelt to bust up these corporate holdings.