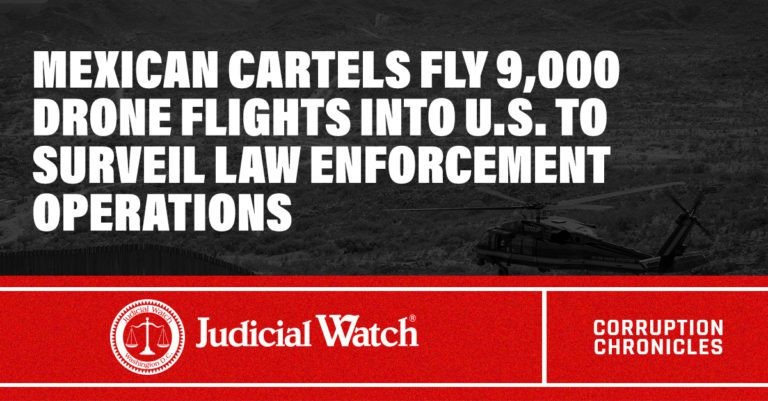 Mexican drug cartels have conducted more than 9,000 drone flights into U.S. airspace in the last year to surveil American law enforcement and security operations in the southern border region, a senior Homeland Security official told Judicial Watch this week. The drones are observing federal, state, county, and city agencies near the Mexican border, including the U.S. Border Patrol, Texas Department of Public Safety, Texas National Guard, county sheriffs and local police. The Border Patrol, which operates under Customs and Border Protection (CBP), has captured about a dozen of the drones, and accessed the Unmanned Aerial Vehicles’ (UAVs) guidance and memory systems to gain intelligence information, according to a high-level official at the agency.

Judicial Watch learned about the Mexican cartel drone incursions during a recent visit to the southern border and specifically while interviewing federal officials at the CBP Rio Grande Valley sector in Texas. Judicial Watch is further investigating the matter and has filed a Freedom of Information Act (FOIA) request with CBP, the 60,000-member agency charged with keeping terrorists and their weapons out of the U.S., for all records regarding the use of drones by criminal organizations operating along the U.S.-Mexico border for the purpose of surveilling U.S. law enforcement officials or otherwise facilitating illegal activity. The federal public-record request includes, but is not limited to, all information depicting the known or estimated number of instances of the use of such technology, as well as all reports, intelligence assessments, analyses, or similar records related to their use.

Federal officials on the ground tell Judicial Watch that the cartels use the UAV surveillance flights to facilitate human smuggling and drug trafficking. Specifically, they help identify gaps in border coverage and assist the cartels in overwhelming certain areas to create a diversion for moving sensitive or high value loads through alternate border locations. The data analyzed from the confiscated drones has also provided U.S. authorities with other law-enforcement sensitive information that cannot be made public, government sources said, adding that drug cartels started using the devices a few years ago. Brandon Judd, the president of the union representing the nation’s 20,000 Border Patrol agents, told Judicial Watch the drones are also used to smuggle small amounts of drugs into the U.S. “They are dropping fentanyl,” Judd said this week. “They fly into certain locations, drop them to the ground and fentanyl is taken off of them and they take back off into Mexico.” The drones are not military grade, Judd confirmed, but rather “run of the mill” that can be purchased anywhere.

Reports of Mexican cartels using UAVs to enhance their illicit operations began surfacing within the last few years. In fact, three years ago agents in the El Paso sector around 750 miles from the Rio Grande Valley revealed in a news report that they had witnessed what they believed to be the first use of a drone by a Mexican cartel to act as a “look-out.” In the story CBP officials from the El Paso sector are quoted saying that agents “discovered a new tactic in counter surveillance,” referring to the UAV. An agent monitoring the border with an infrared camera discovered the drone traveling north into the U.S. from Mexico, the article states. Last year Mexico’s largest newspaper reported that some of the country’s most notorious cartels, including Jalisco Nueva Generación, used drones with explosives to attack police in the western part of the country. Back in 2018, an academic study found that cartels use drones to look for Border Patrol agents and inform drug smugglers of their positions. The research focused on the complex security landscape of military drones for border security and non-state actors with sharply diverging motives to develop their own drone surveillance capacities.