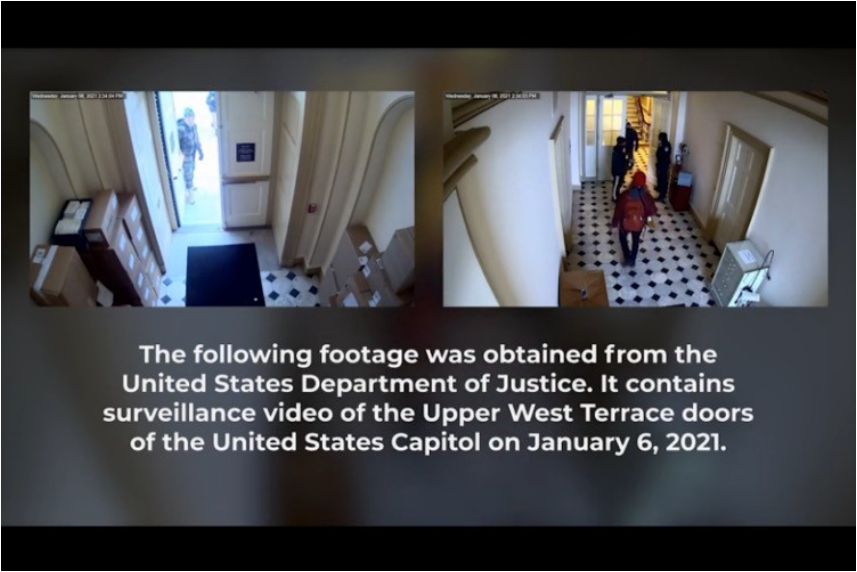 For the past 15 months, liberal politicians and their accomplices in the mainstream media have pointed to January 6, 2021 as an “insurrection” that “threatened democracy” and nearly overthrew the federal government. But newly released video confirms the claims of many who were there — even those who have been charged with breaching the Capitol Building — that police allowed them to enter the building through open doors.

The video — which Gateway Pundit reports was compiled to be presented in court as part of the defense of Brady Knowlton and Patrick Montgomery — shows police officers allowing protesters into the Upper West Terrace Doors of the U.S. Capitol on January 6. The video is edited to mark certain time stamps and includes a voice-over narration of the events.

Gateway Pundit reports that Alan Dershowitz is representing both Brady Knowlton and Patrick Montgomery. Both men have been charged with “Obstruction of an Official Proceeding” for entering the Capitol Building on January 6. But Dershowitz says the video shows “that a reasonable person could believe that he or she was not being stopped or prevented from going in.” He goes on to say that one could even gather from the video that someone who entered the building that day could have believed “that the police were welcoming him in.”

Gateway Pundit says the video was provided to them by “a trusted source” and that it was “originally obtained from the United States Department of Justice after media organizations joined a motion to have it released.” But since the video lacked context, “it has gone largely under the radar until it was put into context by our source, who carefully edited the video so the average viewer can understand what is going on.” 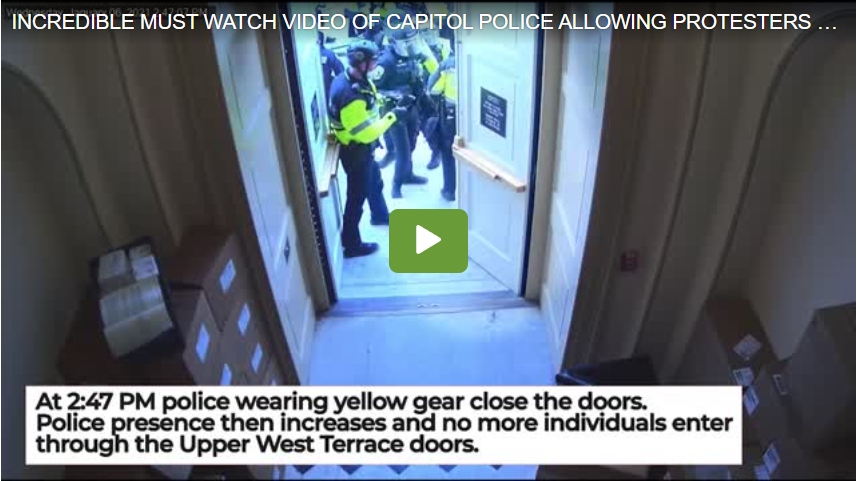 Assuming the video is presented as evidence for the defense, it is hard to imagine an impartial jury made up of reasoning adults finding Knowlton or Montgomery guilty. The video does clearly show that police officers held the Upper West Terrace Doors open for people to enter the building. The video also shows police officers walking back and forth through the crowd — sometimes turning away from the crowd and showing no signs of believing themselves to be in danger from the people they had just allowed into the building.

In the video, we see the same scene from two different side-by-side vantage points of the interior house cameras of the US Capitol. Both cameras were facing the same door on the Upper West Terrace from opposite directions. The identical time codes in the videos can be seen in the upper left corners.

The video shows police behaving like museum staff security guards as they stand or walk idly by as unknowing men and women walk through a small set of Capitol doors carrying American flags and Trump signs. Many are innocently occupied by taking selfie videos of themselves and the crowd, apparently excited to be inside the People’s House and wanting to commemorate the occasion. They are clearly oblivious to the fact they were doing anything illegal, or they surely would have turned their cameras off and hid from video recording. They had no idea of the political persecution, shame and the witch hunters that will come for them later.

Dershowitz says he hopes “all Americans” see the video, adding, “I think it is going to help in the court of public opinion as well.” The liberal mainstream media have consistently portrayed anyone who entered the building on January 6 as “insurrectionists” trying to “overthrow the government.” Dershowitz’s wish for people to see for themselves that — at least at the Upper West Terrace — police allowed (or even welcomed) people into the building could go a long way to showing that narrative as false.

Gateway Pundit quotes Harvard law professor Ronald Sullivan, Jr. as saying, “The Capitol is the People’s House — it is normally open.” Sullivan added, “Unless you are an insider you would have no way of knowing which doors are public access and which doors are not. Hundred of thousands of people, if not millions, every year go in and out of The Capitol so there is nothing on its face odd about that.”

Besides planning to enter this video into evidence, Dershowitz is also fighting to get the audio from bodycams worn by police officers that day, saying, “We have to get the audio recordings from the Capitol police.” He went on to say, “The Brady decision trumps local law.”

Dershowitz is referring to a Supreme Court case Brady v. Maryland, 373 U.S. 83 (1963). The primary holding was that the government’s withholding of evidence that is material to the determination of either guilt or punishment of a criminal defendant violates the defendant’s constitutional right to due process.

Incredibly, the Capitol Police and DOJ continue to withhold exculpatory video and audio evidence that could exonerate January 6th prisoners.

Dershowitz is reported to have said:

So if a government unit has any relevant evidence it must be turned over. There is no justification for not turning over. They have not turned all of it over yet and they are absolutely required to turn it over by law. Those rules (Capitol police exemption of Freedom of Information Requests) are subordinate to the Constitution. Brady v. Maryland is a constitutional decision and every government unit has an obligation to comply with Brady. I think they will have to comply and we will get the chest camera video and the audio as well. We think the audio is very important. We are fighting for it and will not rest until we get it.

While the anti-Trump rhetoric of a violent “insurrection” has saturated most media reports of January 6 — and has certainly poisoned the well of any chance of a fair trial for most of the defendants — this video may help Knowlton and Montgomery. On April 6, Judge Trevor McFadden acquitted January 6 defendant Matthew Martin on all charges in a bench trial after viewing similar video presented at trial. That video clearly showed Capitol Police waved Martin through a door, which is what he had claimed all along.

As Gateway Pundit reported on that acquittal:

The judge said video shows two police officers standing near the Rotunda doors and allowing people to enter as Martin approached (this video has not been released to the public). One of the officers appeared to lean back before Martin placed a hand on the officer’s shoulder as a possible sign of gratitude, the judge said.

McFadden acknowledged that Martin entered the Capitol, but said in his ruling that “intent was key”. The Judge ruled that Martin’s belief that he had police officer’s permission be inside the building was reasonable and “plausible” because police officers didn’t try to stop him.

“You are a free man,” he told Martin after he found him not guilty.

Martin’s acquittal was perfectly reasonable. It would also be reasonable for Knowlton and Montgomery to be acquitted of all charges. After all, what impartial jury or judge would find someone guilty of entering a building that is usually open to the public — especially when police allow and even appear to welcome them in?