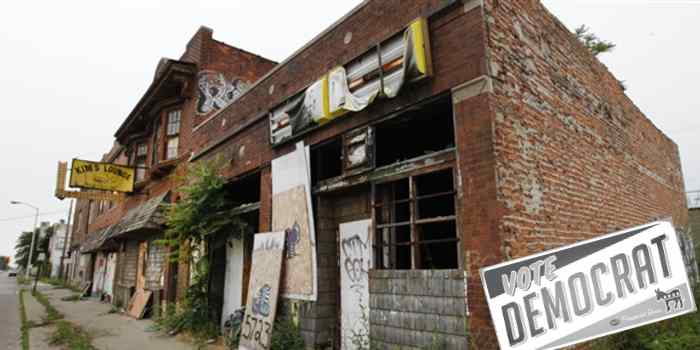 All of the problems in our urban areas today are almost exclusively the result of the failed Democratic Party leadership. While previous generations of Democrats might have tried to find bi-partisan solutions to long standing problems, the party’s leaders in 2021 are woke leftists interested only in pushing their radical agenda.

The result has been outmigration, soaring crime rates, a drug epidemic, broken families, failing public schools, an increasing number of blighted properties, high poverty and unemployment rates, an obsession with a race-based agenda and rising antipathy toward law enforcement officers. No wonder people are fleeing our cities in hopes of finding safety and a better quality of life.

Recent headlines show the absolute destruction that is ongoing. In New Orleans, there was another shooting early Saturday morning on Bourbon Street, in the French Quarter, the city’s premier tourist destination.  In this case, five people were shot. Sadly, this type of carnage is becoming a regular occurrence in the Crescent City. New Orleans is suffering from a shortage of police officers and an abundance of criminals.

In Philadelphia, police department leaders are lamenting a shortage of officers as few new recruits are coming forward to replace the large number of retirements. Currently, the department is already understaffed, and the problem will only grow worse.

In Los Angeles, crime is skyrocketing while George Gascon, the new woke District Attorney, is pledging to dismantle his office’s Hardcore Gang Division. This decision is baffling to many citizens as statistics show that gang violence has contributed to approximately 60% of the murders in the first 110 days of the year.

Portland, Oregon has been a cesspool of rioting and looting ever since the death of George Floyd made national headlines last Memorial Day. Incredibly, it has never stopped. Last weekend, stores were set ablaze and burglarized. On Friday, a large mob of anarchists spray painted storefronts with graffiti, broke windows, and terrorized diners in a restaurant.

Lack of interest at the state level of leadership to protect decent, taxpaying citizens

After the latest incidents, the far-left Mayor of Portland, Ted Wheeler, asked citizens to “call the police” if they see protesters “dressed in all black.” It is much too little, much too late for Wheeler, who has been punched and ridiculed by Antifa affiliated thugs. He has not been able to enjoy a meal in a restaurant or even live peacefully at his home. Protesters, dressed in black, staged a sit-in at Wheeler’s condo building and even hurled “bags of rubbish” and other objects at him as he was walking down a street.

The chaos is also continuing in Seattle, the epicenter of Antifa related violence. In this city, the far left created an autonomous zone, attacked a police precinct headquarters, and basically declared war on law abiding citizens. The craziness never stopped due to incompetent and fearful leadership.

This week, Motion Church, based just south of Seattle, was forced to cancel a speech by Charlie Kirk of Turning Point USA. After the speech was announced, a Seattle Antifa organization threatened to destroy the church.

This threat forced the church’s Pastor, Roger Archer, to make his decision. According to Archer, “cops don’t have the manpower to protect the several properties used by the church.” He claimed, “the soft targets of churches, the elderly, women, children, and law-abiding citizens are vulnerable to anarchists who live free of the fear of reprisal.”

Archer also correctly noted that “What recent history has taught us is there’s an apparent lack of interest at the state level of leadership to protect decent, taxpaying citizens. Those terrorist mobs know that there is no consequence for their lawlessness. They have nothing to lose and nothing to fear.”

Archer is right, while the FBI and Department of Justice are busy arresting and prosecuting all the individuals who entered the U.S. Capitol Building on January 6, 2021, there have been few, if any, repercussions for those involved in approximately 275 riots that have occurred in Seattle and other cities across the country since last summer.

Americans can thank the woke Mayors and the woke Department of Justice for contributing to the anarchy and destruction on the streets of America’s cities.

This is especially true in New York City, led by hopelessly left-wing Mayor, Bill de Blasio. During his tenure, New York is being decimated by not only the pandemic, but also by rising crime. In 2020, shootings increased by almost 100%, while murders increased by 44%.

One factor in this increase is that New York police officers do not feel any support from the Mayor. There have been multiple incidents, many captured on video, of police officers being viciously attacked by criminals, who face almost no penalties for their actions.

It is no surprise that in 2020, an astounding 5,300 police officers retired or quit. This is a 75% increase from 2019. As more police officers leave, the crime rate will continue to rise, and taxpayers and business will continue to flee. In response, Mayor de Blasio has continued to pander to the far left and failed to address the concerns of police and terrified citizens.

In Minneapolis, weak, woke leftist Mayor Jacob Frey has turned over his city to protesters demanding “justice for George Floyd.” However, the no-go zone created near the intersection where Floyd died has seen an enormous reduction in customers, mostly hurting local African American business owners.

One area restaurant proprietor, Alexander W., told the New York Post that city leaders “left me in danger.” He said, “They locked us up…left us behind…left me with no food, no water, nothing to eat.”

Hopefully, the citizens in these woke hellholes will eventually realize that the best way to improve their plight will be to stop voting for Democratic Party politicians, who deliver only poverty, misery, violence and, ultimately, failure.

For more information or to order his new book, America’s Last Chance, visit his website JeffCrouere.com  For questions or to schedule Jeff for media appearances, email him at jeff@jeffcrouere.com