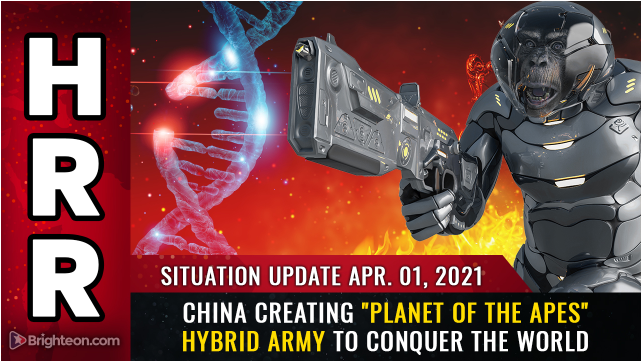 This is not an April Fool’s joke. According to The Sun (UK), China has become a “dumping ground” of horrifying genetic experiments that are combining human genes with chimpanzees (and other primates) to create hybrid “Planet of the Apes” specimens. The long-term goal is to genetically engineer a race of obedient “humanzee” hybrid super soldiers who have the crazy strength of apes and just enough intelligence and obedience to follow orders and carry weapons.

As I explain in today’s Situation Update, people who live in California shouldn’t be surprised if, one day, a CCP transport ship hits the beach and starts unloading armed Planet of the Apes humanzee soldiers as part of a communist invasion of America. This is no longer science fiction; it’s part of China’s global domination plan.

“Human-monkey hybrids, souped-up viruses, head transplants and gene editing are just some of the tests known to have been carried out by Chinese scientists,” reports The Sun. “[I]t is known the Communist Party-state has been carrying out all kinds of dangerous and ethically controversial research which may not be allowed in Western countries.”

Because the CCP has zero ethics and no regard for morality, compassion or the value of life — they’re also athiests who hate Christians, by the way — China has become the choice for mad science experiments that may unleash devastating consequences for humanity. The CCP also runs the Biden crime family, of course.

The Wuhan Virology Institute’s release of the SARS-cov-2 virus — “covid-19” — is a perfect example of this danger. With the help of sociopathic medical tyrants like Dr. Fauci, China built a viral bioweapon and unleashed it upon the world, setting in motion a devastating series of events that are impacting human freedom, economic productivity and even elections.

Are the White Hats still in charge, somehow?

Also today, Patrick Byrne makes a statement about bombshell new evidence that will be released soon, which he says could possibly put Trump back in the White House later this year.

Apparently, there’s irrefutable proof of election rigging that can’t be suppressed, but we’ll have to wait and see exactly what it is.

Meanwhile, Johnson & Johnson managed to screw up the ingredients of its coronavirus vaccine, causing 15 million doses to accidentally use an ingredient that’s normally reserved for the AtraZeneca vaccine that’s been killing people with blood clots. So now, J&J’s 15 million doses are on hold while the FDA pretends to investigate their “safety,” which is of course a complete joke.

France’s president has ordered a new nationwide lockdown, most likely due to post-vaccine super strains now gaining a foothold in the country and sending more people to the hospital.

YouTube is removing “dislikes” from Biden / White House videos to protect the wildly unpopular fake president, and 24 world leaders are announcing they’re all-in for the covid-19 “great reset” to enslave humanity and proceed toward the “Final Solution” of global extermination.

You’ll find all that and more in today’s Situation Update podcast, featuring armed genetically engineered space monkeys from China as the thumbnail image: 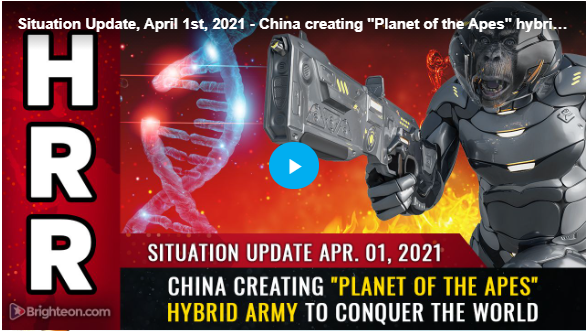