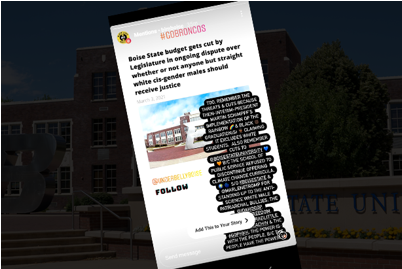 Sometimes it matters who your friends are.

Boise State has tried to convince legislators that social justice education has no place on its campus. They have implied that the IFF report on Social Justice education lacks sound data and analysis.

BLM Boise sees Boise State University as their (himes-herses) ally in the war against “straight, white cis-gender males,” as they wrote on their Instagram page recently.

BLM has good reason to see Boise State as an ally.  Three Boise State departments placed pro-BLM statements on their websites. Boise State did nothing until the state Legislature began to pay attention to these matters. They disappeared down the memory hole a few weeks ago.  But BLM knows who its friends are.

BLM knows that Boise State has circulated a long list of pro-BLM readings for its faculty to consider integrating into its curriculum. BLM knows who its friends are.

BLM knows that Boise State has empowered activists on its Inclusive Excellence Student Council to intimidate campus vendors who support the police off of the campus.

Boise State has hired Jeremy Harper for its BUILD program, a teacher training program. Harper thinks that “the Thin Blue Line flag encourages white supremacy.” He is hired to educate our educators. Perhaps BLM knows who its friends are.

All of this adds up to a conclusion. BLM knows that Boise State is its ally in promoting the radical social justice agenda. Perhaps BSU is embarrassed by it.

Do Idaho’s legislators know who their friends are?