Who Were the Vandals? 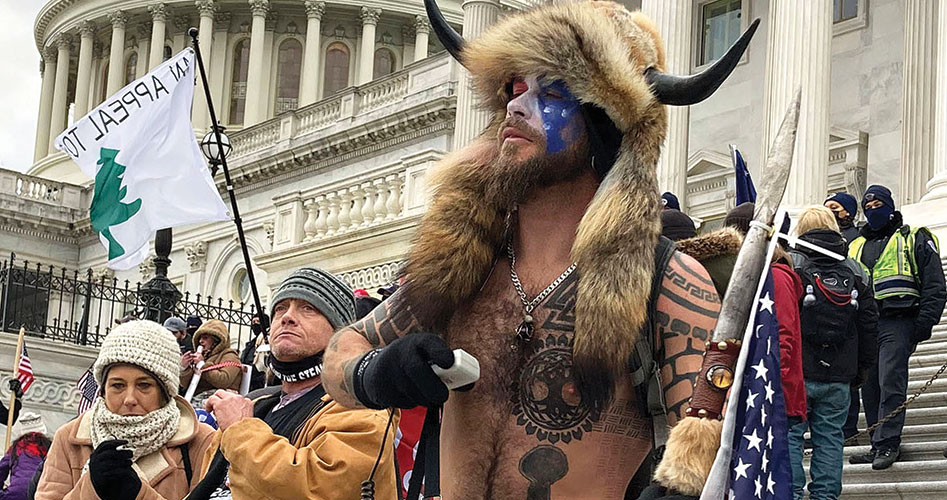 Who Were the Vandals?

On Wednesday, January 6 — as Congress met to certify the votes of the Electoral College — hundreds of thousands of Americans gathered in Washington, D.C., to protest “the steal.” In the end, the Capitol Building had been breached, five people were dead, many others were injured, scores had been arrested, Trump supporters were portrayed as “violent insurrectionists,” and President Trump — who would later be impeached (for the second time, again for trumped-up charges) — was accused of “incitement of insurrection.” When Trump blamed the violence on “Antifa people,” Democrats, their MSM accomplices, and spineless Republicans who prefer their elevated positions more than the best interests of the nation joined together to sing in a chorus dismissing Trump’s claims as “ridiculous” and “absurd.” But were they ridiculous and absurd, or was he correct in his claim that “Antifa people” were behind the violence of January 6?

In the weeks between the election and the certification, it had become undeniably apparent that the election had been rigged to assure a Biden win. Voting irregularities, flip-flopped ballots, missing ballots, deleted votes, and other hi-jinks resulted in an election victory for Biden that could not have resulted from an honest and accurate count. Millions of Americans were angered by this de facto disenfranchisement (after all, the franchise is not merely about the casting of ballots, but also about the accurate counting of those ballots).

That justifiable anger led as many as a million Trump supporters to travel to D.C. to demand that their voices be heard. So far, so good; a “redress of grievances” is enthroned in the First Amendment as a sacred right of the people, against which “Congress shall make no law.” But what happened next is where things went sideways. Because what happened next is that “Antifa people” indeed stirred up the pro-Trump crowd, leading a very small percentage of them to join in on storming the Capitol Building, breaching its walls, and vandalizing offices and other parts of the building.

Evidence of Antifa and other leftist instigation is legion. Any denial of the Left’s part in the violence requires deliberate ignorance of the known facts and a level of intellectual dishonesty that breaches the borders of morality.

For instance, one poster child for the “insurrection” is Jake Angeli — the “shamanic practitioner” who appeared at the D.C. march in his usual attire of face and body paint and fur headdress complete with horns. Angeli has direct ties to leftist groups and events. He marched in Arizona in September 2019 “in solidarity with climate strikes around the world,” according to photos and reports from azcentral, The National Pulse, and other websites. He also participated in other “climate-change protests” linked to Swedish activist Greta Thunberg. Not a likely entry on the resume of a “Trump supporter.”

Another of the alleged “Trump supporters” arrested for his participation in the violent breaching of the Capitol is Aaron Mostofsky. Mostofsky also wore fur at the march, though his was in the form of a cape-like wrap. He also wore a ballistic vest. He is not only a registered Democrat, but also the son of a New York judge. Again, does this sound like any Trump supporters you know?

And more to the Antifa point, John Earle Sullivan, a frequent flier at BLM and Antifa events, posed as a “Trump supporter” and journalist at the D.C. march. His veneer of being a “passive observer” peeled away quickly when video he shot showed him agitating the crowd of Trump supporters. He can clearly be heard on the videos saying, “We got to get this s**t burned,” “It’s our house motherf*****,” and, “You guys are f**king savage. Let’s go!” Even before his involvement in the breach of the Capitol, Sullivan was already facing rioting and criminal mischief charges “stemming from a Black Lives Matter protest in Utah last year,” according to a report from Rolling Stone. In the days before the march, Sullivan used his social-media influence to organize other leftists to attend and infiltrate the crowd of actual Trump supporters. His call appears not to have gone unanswered.

The New York Post reported that a law-enforcement source told the newspaper that “at least two known Antifa members” were identified in the crowd of Trump supporters. They were disguised in pro-Trump attire and blended with the crowd, agitating lawlessness and violence.

Of course, it is obvious that some small percentage of the hundreds of thousands of Trump supporters present fell for the ruse and got caught up in the moment. This is why a mob mentality is so dangerous. Marches and lawlessness are never the proper tools of the Right; they are the tools of the Left, who enjoy the protection of the MSM. Concerned patriots would better serve their country by joining solid organizations, such as this magazine’s parent organization, The John Birch Society. Such concerted, moral, legal action as practiced by the JBS is the only viable option. By helping to create an informed electorate, we can work to make — and keep — America great again.