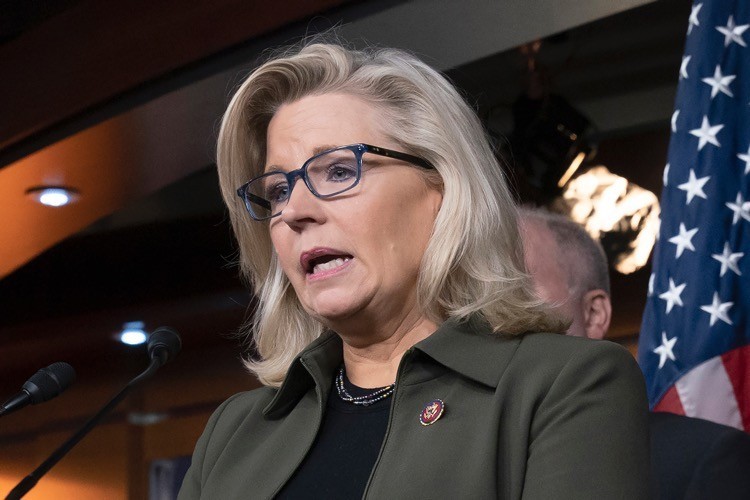 “She couldn’t win a primary today for dog catcher,” declared Martin Kimmet, chairman of the Republican Party in Park County, Wyoming. The “she” Kimmet is referring to is, of course, Representative Liz Cheney, Wyoming’s sole representative in the U.S. Congress and the leading Republican to side with Nancy Pelosi and the radical Democrats in their impeachment travesty against President Donald Trump. In November, Cheney, the daughter of former Vice President Dick Cheney, won re-election to her third term in the House and was elected by her GOP colleagues to House Republican Conference Chair, the No. 3 House Republican leadership post. Cheney’s impeachment vote and her vehement denunciation of President Trump have stirred a furious hornets’ nest in Wyoming, which voted overwhelmingly for Trump. It has also inspired demands from House Republicans to remove her from the chair of the Republican Conference.

The Wyoming Republican Party, GOP county central committees, and Republican officials have denounced Representative Cheney’s vote for impeachment and her claim that “There has never been a greater betrayal by a President of the United States of his office and his oath to the Constitution.” They are also outraged that she chose to adopt the Pelosi-Schumer-Fake News meme that President Trump is guilty of inciting “insurrection.”

The Wyoming Republican Party responded, expressing the widespread condemnation of Cheney that has poured in to the party leadership. “There has not been a time during our tenure when we have seen this type of an outcry from our fellow Republicans, with the anger and frustration being palpable in the comments we have received,” the party statement reads. “Our telephone has not stopped ringing, our email is filling up, and our website has seen more traffic than at any previous time. The consensus is clear that those who are reaching out to the Party vehemently disagree with Representative Cheney’s decision and actions.”

Among the charges listed in the Wyoming State GOP statement are the following:

As to be expected, Liz Cheney’s backstabbing of President Trump has made her the darling of the HateTrump “progressives” and the NeverTrump RINO’s who pose as Republicans and pretend to be “conservative.” These are a few of the headlines by the Cheney Cheerleaders of the Fourth Estate:

The National Review paean to Liz Cheney is deserving of a closer look. The increasingly irrelevant and totally discredited magazine still markets itself as the vanguard of intellectual conservatism despite its sordid history of promoting socialistic “Big Government conservatism” and attacking constitutionalist conservatives.

In 2016, Rich Lowry and the editors of National Review dedicated an entire issue to “Against Trump.” It featured more than 20 prominent neoconservative NeverTrumpers, the Beltway blatherskites favored by the left-wing media to instruct conservatives on what they should think, how they should behave, and whom they should support — or oppose.

National Review’s “In Defense of Liz Cheney” begins with the declaration that “Liz Cheney undertook a stunning act of political courage last week.” “She voted to impeach President Trump,” the editors say, “with a statement meant to leave a mark and make it as hard as possible for fellow Republicans to turn away from his misconduct. She said of Trump’s behavior before and after the riot that ‘there has never been a greater betrayal by a President of the United States of his office and his oath to the Constitution.’”

“Cheney did this, not as a moderate member of the House from a suburban swing district, but as a conservative from Wyoming’s at-large district,” the editors continue. “She did it knowing that she would put a political target on her back, and indeed the backlash was instantaneous, with calls to boot her from leadership and threats of a primary challenger. Cheney’s rejoinder is that hers was a vote of conscience, a word and concept that some of her critics need to reacquaint themselves with.”

According to the NR editors, “The Republican Party needs more officeholders like Liz Cheney who take their responsibilities seriously and are willing to go their own way when they believe it is right. Brava.”

National Review would have Republicans not only dump Trump but eradicate “Trumpism,” national sovereignty, “America Firstism,” economic independence, and secure borders. They can’t stand that in four years Trump has reversed nearly 50 years of treachery by previous administrations in building communist China into a world power, has started the return of American manufacturers to the United States, has jump-started our economy, and has brought a flood of black, Hispanic, and other ethnic minority voters into the GOP.

The National Review editors want Republicans to listen to NR’s comrades in the HateTrump chorus at CNN, MSNBC, PBS, and the rest of the leftists in the Fake News media cartel, instead of the Wyoming Republicans who put Cheney in office and are most familiar with her.

In her January 12 statement, Representative Liz Cheney said, regarding the January 6 Capitol melee:

While the hearts of both the “progressive” and neocon Beltway pundit classes are all atwitter for Liz, members of Wyoming’s Carbon County Republican Central Committee are outraged. The 45-member committee voted unanimously to censure Cheney.

The censure resolution charges that Cheney voted “in favor of the impeachment of President Donald J. Trump despite the lack of any formal hearing being held, evidence being presented, witnesses being sworn to testify, or accusers being questioned.” The resolution also notes that “No evidence exists that President Trump has ever called for a violent response to political opposition. Where, in comparison, Representative Cheney’s new political allies on the left have continually called for violent uprisings and destruction of both personal and public property, to include raising bail money for the insurrectionists.”

The Carbon County Republican Central Committee called on Cheney to appear before the committee at its next scheduled meeting to explain her conduct to that body, the state GOP, and “the entirety of the concerned Wyoming electorate.”

The chairman of the committee, Joey Correnti, IV, told BizPac Review that committee members have tried to contact Representative Cheney by phone and e-mail, but “haven’t heard anything.” Undoubtedly, Cheney is too busy schmoozing with her new-found Pelosi-Schiff-Schumer-CNN allies and basking in the applause of her neocon admiration choir to face the folks back home.

According the Washington Post, “Rep. Liz Cheney’s historic decision Tuesday to vote to impeach President Trump had its roots in a dramatic phone call from her father, former vice president Richard B. Cheney, who was watching events unfold on television last week.”

That information should not surprise, since Dick Cheney, one of the Republican Party’s high-level Deep State operatives, has shepherded his daughter through the corridors of power over the last three decades. As the video below shows, Dick Cheney — in his own words — admits (with a sinister chuckle) before an assemblage of the Council on Foreign Relations that he is a longtime member of the organization and even served as a director, but he never mentioned that to the conservative folks back home who voted for him. His interchange with David Rockefeller, whose family owns a big stake in Wyoming, is particularly instructive, since Rockefeller — “Mr. Globalist”— was the epitome of the Deep State/Eastern Establishment that has seized control over our nation.

Liz Cheney’s campaign webpage declares in large, bold type: “Reelect a Strong Conservative Voice Working for Wyoming.” “As Wyoming’s lone Representative in the U.S. House,” it continues, “Liz has been a leader in restoring our liberties and fighting for our constitutional rights.”

Well, not exactly. According to The New American’s Freedom Index, Representative Cheney scored a meager 50 percent, hardly a mark of a stellar conservative or constitutionalist. Moreover, she has been a major defender of Anthony Fauci’s unconstitutional, unscientific, un-American, totalitarian COVID-19 decrees. Among other actions and statements, this past June she tweeted a photo of her dad wearing a Fauci face diaper (along with the obligatory photo-op cowboy hat) along with the statement, “Dick Cheney says WEAR A MASK,” along with the COVID propaganda hashtag “realmenwear masks.” 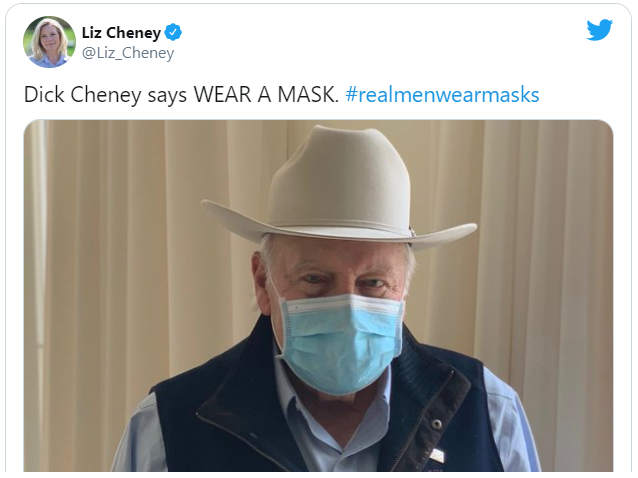 Faux cowboy Dick Cheney’s net worth is estimated to be around $100 million, enabling him to live comfortably among the billionaire globalists who have invaded Wyoming and bought up large tracts, especially in Teton County, home to tony Jackson and Jackson Hole: Bill Gates, former Google CEO Eric Schmidt, Walmart heiress Christy Walton, and, of course, the Rockefeller family.

Notably, Liz Cheney also has sided with the war-hawk Democrats and neocons in opposing President Trump’s efforts to fulfill his pledge to bring American troops home from Iraq and Afghanistan, and to end our involvement in “endless wars.” Again, in this she appears to be channeling her father, a key figure in “The Vulcans,” President George W. Bush’s war council, composed of CFR “perpetual war” globalists. She began her career with boosts from Vulcans: her dad, Richard Armitage, and General Colin Powell. She is still being boosted by the Deep State operatives of Big Money, Big Government, Big Media, Big Tech, and Big Business.

The blowback against Liz Cheney’s vote to impeach President Trump is widespread and strong in The Cowboy State, but it’s an open question whether that will translate into her ouster in the next election, or whether the high-powered globalist outsiders and invaders will manage save her from the voters’ wrath.

It’s Time to Purge the GOP of RINOS. Start With Liz Cheney.

NeoCon NeverTrumpers Are Willing to Throw Election to Biden