A new viral video calling on liberals to form “an army of citizen detectives” to gather information on Trump supporters and report their activities to the authorities has racked up thousands of shares and millions of views in just a few hours.

The hashtag #TrumpsNewArmy is trending on Twitter as of this writing due to the release of a horrifying video with that title from successful author and virulent Russiagater Don Winslow. As of this writing it has some 20 thousand shares and 2.6 million views, and the comments and quote-retweets are predominantly supportive. 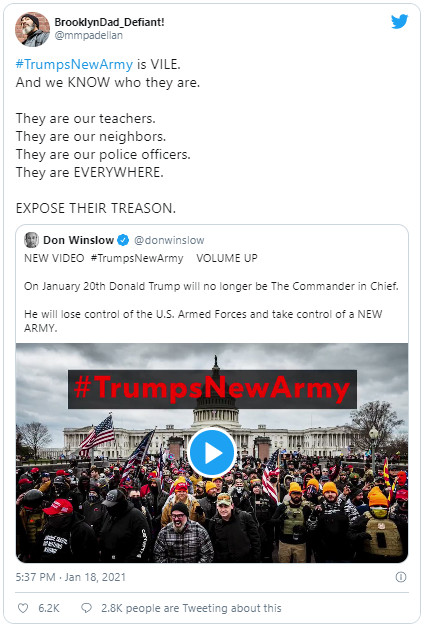 Viewers are then shown footage from Trump rallies while being told that they are looking at “radical extreme conservatives, also known as domestic terrorists”.

“They are hidden among us, disguised behind regular jobs,” Winslow warns.

“They are your children’s teachers. They work at supermarkets, malls, doctor’s offices, and many are police officers and soldiers.”

Winslow talks about white supremacists and the Capitol riot, warning that Trump will continue escalating violence and fomenting a civil war in America.

“We have to fight back,” Winslow declares.

“In this new war, the battlefield has changes. Computers can be more valuable than guns. And this is what we need now more than ever: an army of citizen detectives. I’m proposing we form a citizen army. Our weapons will be computers and cellphones. We, who are monitoring extremists on the internet and reporting our findings to authorities. Remember, before the Navy Seals killed Osama Bin Laden, he had to be found. He was found by a CIA analyst working on a computer thousands of miles away. It’s up to you.” 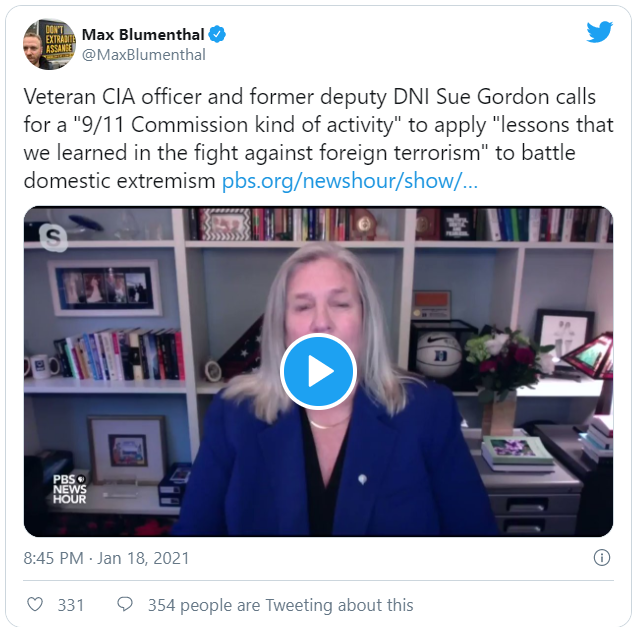 “Donald trump is on his way out,” reads another.

“Good riddance. But his ‘army’ is still here, hiding amongst us. They are traitors. They are evil. And they MUST be rooted OUT.”

“I pledge allegiance to the flag of the United States of America,” reads yet another. “But SOME people… they pledged their allegiance ONLY to trump. These are dangerous traitors.”

“After 9/11, we were told: If you see something, say something,” reads still another.

“We have TERRORISTS in our midst. Some of us KNOW these people. It is our patriotic DUTY to expose them.”

So if you were hoping that maybe liberals would chill out and get a little less crazy with Trump out of the White House, I am sorry to be the bearer of bad news.

This is as insane and scary as I have ever seen these people get, and I was in the thick of peak Russiagate hysteria. An aggressively manufactured push to get an army of citizens spying on each other calls to mind the Stasi informants of East Germany, the patriotism-fueled digital “digging” of the QAnon psyop, and the NatSec LARPing of Louise Mensch Twitter, all rolled into one great big ball of crazy.

This comes out as we are being bombarded with mass media punditry from literal CIA veterans like Sue Gordon and Elissa Slotkin forcefully hammering home the message that domestic terror is the new frontier for combating violent extremism, meaning of course that new Patriot Act-like solutions will be needed. Winslow himself spent six years traveling and doing research for a novel about a former CIA operative, and if some government agency didn’t recruit him during that period they clearly should have.

This will get frightening if it keeps up. Just as a relatively low-profile lefty blogger I routinely get liberals online falsely claiming I’m a Russian agent and saying they’ll report me to the FBI, and that’s without an aggressive campaign urging them to join a powerful digital army. The fact that Winslow stays very vague about what he means by “Trump’s new army” and constantly conflates rank-and-file Trump supporters with white supremacist terrorists means people are effectively being pointed at all Trump supporters, especially when normal Trump rallies are what he points to in the video. If this takes off it can very quickly lead to a volunteer army of power-worshipping snitches against literally anyone who is critical of US foreign policy or the Democratic Party, whether they actually support Trump or not.

In fact just following the trending hashtag I’m noticing Twitter users saying this means targeting all Trump supporters, so clearly that is the message that’s being absorbed. 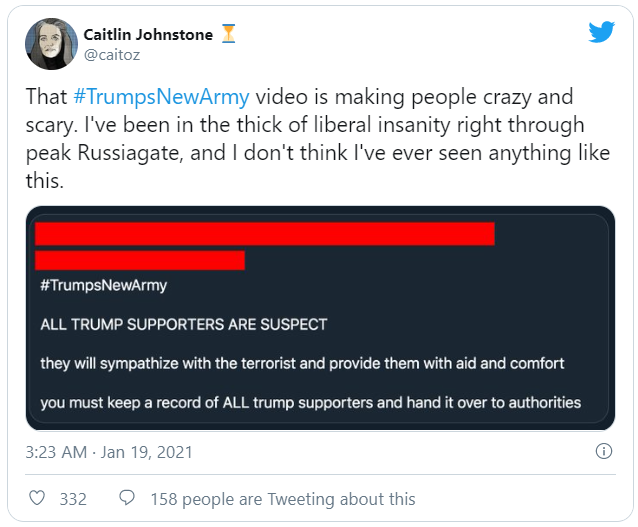 “Trumpers are pushing back so hard against this video because so many of them live in the dark, cloaked behind normal jobs and seemingly normal lives,” Winslow tweeted in promotion of his project.

Well maybe that’s because they are half the voting public, Don?

This is just liberals being pushed toward targeting anyone who isn’t ideologically aligned with them for destruction. I really, really hope it doesn’t take off, because it is profoundly ugly. Please don’t let the manipulators trick you into ripping each other to pieces, America. They’re only pointing you at each other so you don’t look at them.