Our republic desperately needs a new breed of Republicans 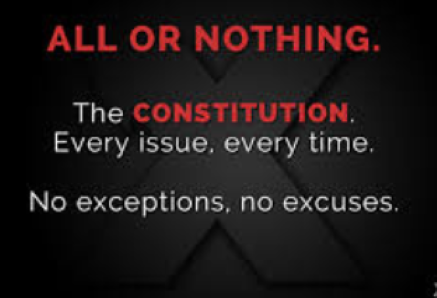 Our republic desperately needs a new breed of Republicans

The answer to politics is not more politics. It’s not making eloquent excuses for compromising fundamental principles. Freedom is what it is. It doesn’t change, it doesn’t mutate, and it doesn’t hybridize with tyranny. Breed one with the other, and the offspring is a two-headed carnivore with an insatiable appetite. Feed it morsels of our liberties, and it will only grow larger and demand more, until it’s swallowed up our Constitution for dinner.

In these times of pragmatic politics and pandering politicians, Republican lawmakers wear the moniker “conservative” like a cheap tin badge won at a carnival game. But they soon forget that freedom is not a game. It is a fight to the finish. Because with so many of our elected officials, politics triumphs over claimed principles, and compromise triumphs over claimed courage, the fight for liberty is becoming a lost cause.

The gradual usurpations are no longer gradual, and we quickly blame the Democrats for that. But we stand at the brink of tyranny not because Democrats act like Democrats, but because so many Republicans do also. As candidates, they roar with the rhetoric of freedom, but cower like kittens when called upon to defend it. In my state of Montana and nationally, Republicans have increasingly marched to the drum of pragmatism over principle. They act as though freedom is a quaint relic, no longer worth fighting for. They have lost their will and lost their way.

Republicans have also lost their memory. To honor their oath of office, all lawmakers must serve with a memory. A memory of the Constitution. A memory of what America was and was eternally meant to be. Democrats’ memory extends as far as the last entitlement and their vision no further than the next one. Their philosophy is a rejection of the very essence of historical America, an assault on the very things that make us distinct as a nation. The bricks and mortar of a free society. The sweat and the spirit of a free people.

But Republicans have no excuse. Their platforms and public pronouncements lay claim to the memory. To the things of liberty. Less government. Lower taxes. Fee markets. Personal sovereignty. Individual responsibility. Freedom of choice. Government – at all levels – staying out of our pockets and out of our lives. These are the words people want to hear, and the reasons they send Republicans to Washington and to our state capitols. Why, then, does government continue to grow when the Republicans are in charge?

What happens to these Republican officeholders after they have raised their hands and sworn to uphold the Constitution? Could the voters be sending off to fight for freedom, people armed with pea shooters? Politicians who really don’t believe in the ideas that got them elected? After serving two terms in the Montana House of Representatives and two terms on the Public Service Commission, I was no closer to answering that question than ever. Democrats hold fast to their Old World philosophy. They believe there is a government solution for everything, and they work daily to bring that about. They are remarkably consistent, and rarely does a single Democrat break ranks with their party’s big government/small people philosophy. Voting records don’t lie.

So, why can Democrats stand firm on the things people don’t want, while Republicans cannot stand firm on the things people do want? Is the GOP so lacking in the courage of their convictions, or are they simply lacking in conviction? Certainly, the constant pressure to be a “team player,” bury your personal beliefs and adopt the party line leads many lawmakers to vote for all kinds of interventionist schemes they say they don’t believe in.

The path of least resistance always leads in the direction of bigger government, more spending and more programs resulting in more dependency and more “entitlement.” Programs and handouts create the illusion of net benefit, because the benefit to the few is large and visible, while the cost to the many is monetarily small and economically invisible. You cannot see what never was, when taxation removes it. You cannot view a lost opportunity. A job that was never created. A business that never started. A raise that wasn’t given. You can only imagine. Free people imagine. Free people see. Free people believe in the creative fire of a free society. But Democrats haven’t a clue, and contemporary Republicans, it seems, are only slightly better. They nod in agreement, but freedom is an abstraction to them that they can’t articulate or fully embrace. Freedom becomes negotiable.

And so, the Democrats – anchored in their ideology and reinforced by the special interests – set the agenda, even while in the numerical minority. It is painfully obvious that many Republicans running for office are only fashionably conservative. Their conservatism is at best a preference, not a conviction. Because they have done precious little reading on conservative ideas and free-market economics, they are grounded in quicksand. The media and the culture have shaped their thinking more than they realize. Peel away the onion skin of party label, and their voting records quickly betray them.

For five biannual legislative sessions, a group of conservative leaders in Montana tracked the voting records of state legislators on a wide range of issues, using well over 100 recorded floor votes. We called our index Taxpayer Advisory Bulletin (TAB) and based our bill evaluations on one simple criteria: “Does this measure increase or decrease the presence of government in your life?” In every session, TAB demonstrated that while Democratic legislators had an average conservative rating of under 10% (with all in the “liberal” category), Republican legislators were spread across the entire spectrum, with an average GOP conservative rating in the low 40s. Approximately 25% of Republicans scored firmly in the liberal Democratic camp.

Congress shows exactly the same voting pattern. This nasty blend of blue and red produces Grey Zone Republicans that corrupt the two-party system, leaving voters in many congressional and legislative districts with no real choice. It also guarantees that every session of Congress will escort us further down the road to Big Government. Indeed, government growth has continued unabated for decades, even with Republican presidents and Republican congresses. The formula for the demise of our republic remains the same: All Democrats + moderate-to-liberal Republicans = the defeat of the very conservative philosophy most Americans support. It is an oft-repeated tragedy performed on almost every congressional and legislative stage under Republican control. At both the state and federal level, statism and “socialism light” proceed, and hundreds of government-expanding bills get passed – always with Republican support. They could pass no other way.

The media then applaud the “bipartisan spirit” of lawmakers who they acclaim as “dedicated to getting things done.” Never mind that what they are getting done is robbing our family incomes and burying our liberties in massive new government programs, bureaucracies and controls. The media never seem to notice that the only “bipartisanship” that occurs is when Republicans cross over to support liberal legislation. There is no example of Democrats crossing the aisle to support conservative measures that would reduce the size and power of government. All bipartisanship is a one-way street.

So, what is the solution for those of us who still believe freedom is worth fighting for? Answer: Stop hiring cowards and moral relativists to do a patriot’s job. Stop electing skillful, smooth-talking politicians who, as C.S. Lewis once put it, are “men without chests.” If we want to put true champions of freedom to work in our state legislatures and Congress, then we must judge them not so much by their intellect, as by their heart. What do we find there? Do we find true courage, pure faith and virtue-born conviction? Do we find rock-solid integrity and uncompromising moral character? Do we find that same steely-eyed warrior spirit that existed at the founding of our nation? If we settle for less, we get exactly what we deserve. For too long, we have settled for less.

We need men whose hearts beat to the rhythm of liberty. Men like these:

God, give me men! A time like these demands
Strong minds, great hearts, true faith and ready hands;
Men whom the lust of office does not kill;
Men whom the spoils of office cannot buy;
Men who possess opinions and a will;
Men who have honor; men who will not lie;
Men who can stand before a demagogue and damn
His treacherous flatteries without winking!
Tall men, sun-crowned, who live above the fog
In public duty and in private thinking.

Roger Koopman has served for eight years on the Montana Public Service Commission and four years in the Montana State House of Representatives. H previously held key positions on the congressional staffs of Steve Symms, R-Idaho, and Ron Paul, R-Texas. Koopman resides in Bozeman, Montana, where he operated a staffing and career placement service for 37 years.