According to many sources, including now some Pennsylvania lawmakers, the state’s election results are off by upwards of 200,000 votes — more than enough to flip the commonwealth to President Trump.

Now the state GOP is wondering “how the results of the presidential election could possibly have been certified by Secretary of the Commonwealth Kathy Boockvar and Governor Tom Wolf,” as State Representative Russ Diamond puts it (tweet below). 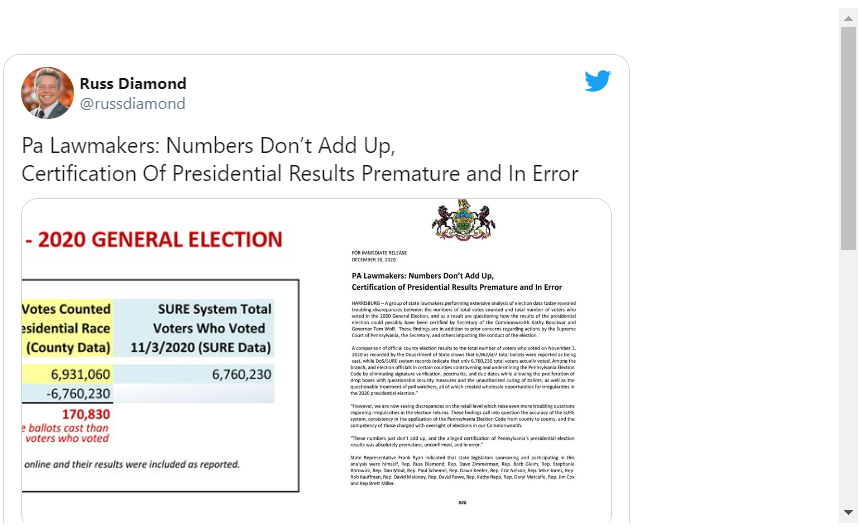 Here are the most relevant paragraphs of the two-page statement the Keystone State legislators issued:

Stating that the “PA lawmakers have done their job (so far),” American Thinker’s James Arlandson then asks, “Now what is the next step?” His answer, in an article fittingly titled “Stunning turn of events in PA may lead to Trump victory”:

Assuming the aforementioned voting-discrepancy statistics are valid — and I’ve no reason to doubt them — they’re yet another anomaly in this naked emperor election. As The American Spectator’s David Catron put it last month, to believe Joe Biden won, “we must accept a perfect storm of implausible anomalies and brazen irregularities.”

“In the end, to accept Joe Biden as our legitimate Chief Executive, we must believe the voters hammered the Democrats in congressional, state, and local elections, yet decided to elect the ‘leader’ of their party president,” Catron summed up. “We must believe that he dramatically underperformed among minority voters, yet received 10 million more votes than Barack Obama. We must believe that virtually all of the reliable election bellwethers were wrong.”

“We must believe that all of the elections in the swing states were conducted honestly and that the Venezuelan software used to tabulate the votes was secure,” he continued. “All of this beggars belief. Joe Biden may be inaugurated in January, but he certainly wasn’t elected president.”

For years I’ve reported on the rampant vote fraud plaguing our country and have cited Democrat after Democrat caught plotting it or admitting it’s a reality. But the problem was allowed to fester by feckless establishment types, Republicans well represented among them, for many decades. And now, faced with a man they hate with the passion of a thousand burning suns, the Left ratcheted up the electoral theft a thousand notches and delivered the jump-the-shark version of vote fraud.

“But President Trump has been losing in court right and left [actually, more like “left and left”],” say the critics. “Why has that happened if there was Grand Theft Vote Fraud?”

Well, note here that there was never sufficient evidence to convict infamous gangster Al Capone of murder, extortion, theft, or any of the various other evils typical of Mafiosi. Authorities finally just got him on tax evasion. Not every truth can be “proven” in court. Yet there’s another factor:

People can’t see that to which they refuse to open their eyes.

Aside from the judges and other officials knowingly facilitating the fraud, another issue is man’s striking capacity for rationalization. It’s a common human experience. Whether it’s the person refusing to fully admit to himself his spouse’s infidelity, someone hooked on cigarettes who insists there’s no proof they’re unhealthful (I knew someone like that), or something else, uncomfortable or scary truths may be hard to accept.

In the case here, overturning an election is quite a big affair. Very few people are willing to take bold, revolutionary action requiring self-sacrifice, and judges and officials know that righting the November 3 wrong would make them heroes to many, but pariahs to the rank-and-file rabble and pseudo-elites. They know about cancel culture. They know that such action could mean harassment, their children’s imperilment, death threats, and needing to acquire armed protection.

Moreover, it’s scary, downright daunting psychologically, peering into that dark closet and beholding the ravenous creature of corruption within. It’s easier saying “Nothing to see here; move along” to yourself and “Don’t trouble me with this tin-foil-hat nonsense!” to others. Yet this is how republics die.

Our Founding Fathers risked being hanged by the neck till dead to found our great land. Now similar courage is needed, and if it cannot be mustered, we will well deserve the fate awaiting us.