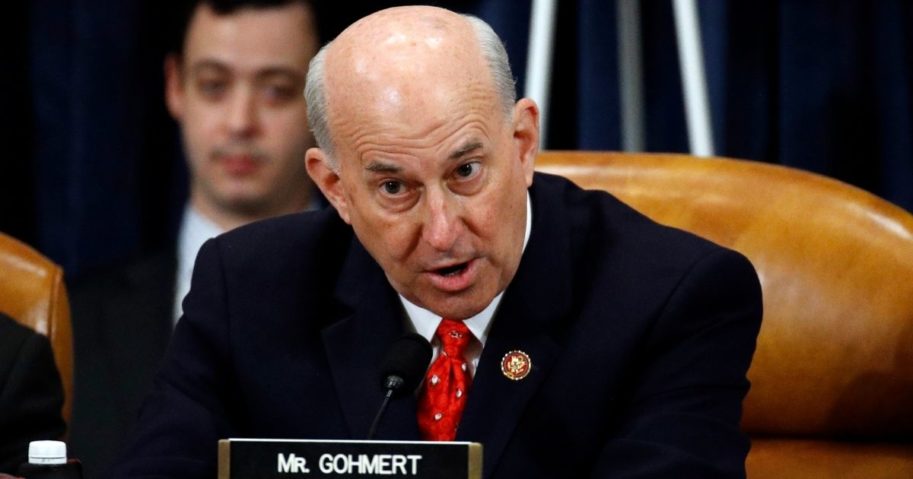 Patrick Semansky – Pool / Getty ImagesRepublican Rep. Louie Gohmert of Texas votes “no” on the second article of impeachment as the House Judiciary Committee holds a public hearing to vote on the two articles of impeachment against President Donald Trump in the Longworth House Office Building in Washington, D.C., on Dec. 13, 2019. (Patrick Semansky – Pool / Getty Images)

Rep. Louie Gohmert of Texas on Monday sued Vice President Mike Pence in federal court in an effort to force him to block votes from swing states when he presides over the Jan. 6 congressional certification of the 2020 Electoral College winner.

Right now, Democrat Joe Biden is slated to be certified as the election winner in that meeting, setting him up for inauguration on Jan. 20.

According to reports, though, Gohmert and other Republicans are seeking to compel the vice president into refusing to accept votes from several swing states, thus allowing President Donald Trump to declare victory.

The Hill described the effort as a “far-fetched.”

“The lawsuit focuses on Pence’s role in an upcoming Jan. 6 meeting of Congress to count states’ electoral votes and finalize Biden’s victory over President Trump. Typically, the vice president’s role in presiding over the meeting is a largely ceremonial one governed by an 1887 federal law known as the Electoral Count Act,” the outlet reported.

“But the Republican lawsuit, which was filed against Pence in his official capacity as vice president, asks a federal judge in Texas to strike down the law as unconstitutional. The GOP plaintiffs go further: They ask the court to grant Pence the authority on Jan. 6 to effectively overturn Trump’s defeat in key battleground states.”

Alex Salvi of One America News shared an image of the top of the legal filing on Twitter.

The suit shows that Arizona GOP chair Kelli Ward and others have joined Gohmert as plaintiffs.

The suit, which was filed in the U.S. District Court for the Eastern District of Texas, essentially asks Judge Jeremy Kernodle to award Pence the sole authority to decide which Electoral College votes to count when Congress meets.

KLTV-TV reported the lawsuit seeks to declare actions taken by Pence to declare Biden as the winner of the election are fraudulent.

“This civil action seeks an expedited declaratory judgment finding that the elector dispute resolution provisions in Section 15 of the Electoral Count Act, 3 U.S.C. §§ 5 and 15, are unconstitutional because these provisions violate the Electors Clause and the Twelfth Amendment of the U.S. Constitution,” the suit reads, according to KLTV.

“Under the Twelfth Amendment, Defendant Pence alone has the exclusive authority and sole discretion to open and permit the counting of the electoral votes for a given state, and where there are competing slates of electors, or where there is objection to any single slate of electors, to determine which electors’ votes, or whether none, shall be counted,” the suit further reads, Politico reported.

Earlier this month, as the Electoral College met to certify the election, the Republicans in the states in question sent alternate “electors” as an apparent play to potentially have their votes used at a later date.

Politico reported that if the suit is successful, those alternate and unofficial Trump electors from states such as Pennsylvania, Michigan and Wisconsin would come into play.

Gohmert’s suit essentially asks that Pence be given the discretion to choose those alternate electors.

It is unclear if the court will hear the case, and Pence has not yet commented on it.

We are committed to truth and accuracy in all of our journalism. Read our editorial standards.

Johnathan “Kipp” Jones has authored thousands of news articles throughout his career. He has also worked as an editor and producer in radio and television. He is a proud husband and father.