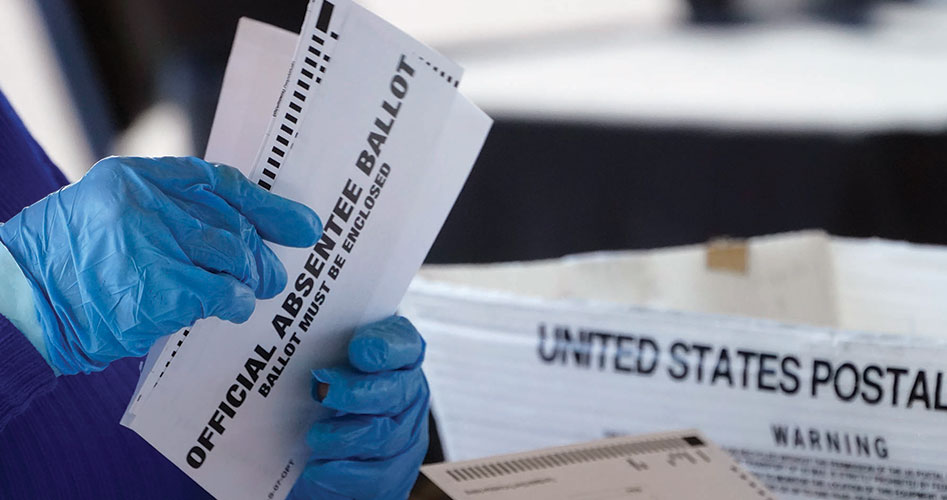 Though anti-Trumpers claim that there is no evidence of vote fraud at levels significant enough to change the 2020 election, that is simply not true.

Most of Big Media, the Democrats, and even many Republicans — mostly RINOs (Republicans In Name Only) — have proclaimed former Vice President Joe Biden the undisputed winner of the 2020 presidential election, arguing that there exists no evidence of fraud — or at least so little as to make no difference in the outcome. And now, presidential electors have met in their respective states, and have cast their votes to name Biden as the next president. But millions of Americans reject this as a true reflection of what the American voter actually wanted, arguing that massive election fraud cost President Trump a deserved reelection. Much of the following evidence is dismissed by the Democrats and their media allies — if they even address any of it at all — as just a “conspiracy theory,” which is, of course, not an argument but rather a talking point. It seems that most of those who did not want Donald Trump to be reelected argue “there is nothing to see here,” while the majority of Trump voters believe there is a whole lot to “see here.”

There is much about the election that makes little sense. The Republican Party gained seats in the House, and increased the number of state legislatures that they control, yet their presidential candidate supposedly lost. It is the first time in American history that an incumbent president gained votes (15 million more votes than Obama got in 2012!) and lost — if he did. President Barack Obama actually received three and a half million fewer votes in 2012 than in 2008, yet won reelection. Biden won only 524 counties across the country, as opposed to the 873 counties Obama won in 2008, yet supposedly Biden got more votes than Obama. Significantly, in Ohio, a state that recently instituted strong election fraud measures, Trump won by eight percentage points! In contrast, in other midwestern states such as Michigan and Wisconsin that lacked these anti-fraud safeguards, Trump lost.

Trump won a larger percentage of the African-American vote than any Republican candidate in 60 years, and a huge increase in the percentage of Hispanic votes. His rallies were filled to capacity, despite concerns over the Chinese COVID virus. Biden, on the other hand, barely campaigned, and his campaign events were sparsely attended.

Moreover, Patrick Basham, the founding director of the pollster group Democracy Institute, added to the ever-growing list of election abnormalities and statistical improbabilities. He said that the election went flat-out against “non-polling metrics” that have a perfect record of predicting the outcome of an election, until now. Those metrics include party registration trends; the candidates’ respective primary votes; candidate enthusiasm; social-media followings; broadcast and digital media ratings; online searches; the number of (especially small) donors; and the number of individuals betting on each candidate.

What is the truth? In this article, let us look at multiple allegations of election fraud in the battleground states (where it mattered to the election’s outcome), and the reader can judge for himself. The states in question are Arizona, Georgia, Michigan, Pennsylvania, and Wisconsin, and it is alleged that enough extra “votes” were produced for Biden — or taken away from Trump — in those states to alter the outcome of a presidential election.

Credible? President Donald Trump was able to increase his support among Hispanics, especially men. Despite this increased support from Hispanics, we are expected to believe that Trump lost Arizona (after winning it in 2016, with much less Hispanic support). (Photo credit: AP Images)

Biden allegedly won Georgia by 12,670 votes out of nearly five million votes cast, but consider this:

Were they just making sure others got good rest? After telling Republican poll workers and challengers — and media representatives — to go home because the counting of ballots was being suspended until the next morning, some election officials remained behind. In the middle of the night, security cameras caught what appeared to be the processing of previously hidden ballots.

Biden allegedly won Michigan by 154,188 votes, out of more than five million cast, but consider this:

Biden allegedly won Pennsylvania by 81,660 votes out of almost seven million votes cast, but consider this:

Biden allegedly won Wisconsin by 20,682 votes out of about three and a quarter million votes cast, but consider this:

Things That Go Bump in the Night

In the early morning hours of November 4, when most Americans had gone to bed, thinking Trump had been reelected, the battleground states of Michigan, Wisconsin, Pennsylvania, and Georgia all experienced a dramatic “bump” in the number of votes for Biden. In an amazing coincidence, these states all had called a halt to the counting, but then in the middle of the night, vote counting began again.

According to The American Spectator, a batch of ballots in Pennsylvania recorded around 570,000 votes for Biden, but only 3,200 for Trump, which is not believable. The American Spectator cited Colonel Phil Waldron, a former combat officer with a background in electronic warfare and election-data fraud to offer an explanation.

“That one batch alone would have flipped the state to Biden,” Waldron said. “The problem with a spike like this is a massive numerical amount of votes are processed in a time period that is not feasible or mechanically possible.” He added, “A big spike [in such an impossibly narrow window of time] shooting up is a prime indicator of fraudulent voting.”

Waldron charged that the Dominion voting systems used in a majority of the states in the United States, including in battleground states such as Pennsylvania and Georgia, “were built to be manipulated.” He claimed that as many as 1.2 million Pennsylvania votes could have been altered or fraudulent.

The vice president of Dominion Voting Systems is Eric Coomer, a strong opponent of Trump. In 2016, he told everyone on Facebook to unfriend him if they intended to vote for the “autocratic, narcissistic, fascists, ***-hat blowhard and his Christian jihadist VP pick.”

Only a few months ago, prominent Democrats were expressing concern about Dominion. Just last year, Senators Amy Klobuchar (D-Minn.), Elizabeth Warren (D-Mass.), and Ron Wyden (D-Ore.) investigated Dominion Voting Systems and concluded that the company posed a concern to the integrity of American elections. “We have concerns about the spread and effect of private equity equipment in many sectors of the economy, including the election technology industry.” They added, “These problems threaten the integrity of our elections and demonstrate the importance of election systems that are strong, durable, and not vulnerable to attack.”

In an order issued just a few weeks before the election, Federal Judge Amy Totenberg said of Dominion, “The case presented serious system security vulnerability and operational issues that may place Plaintiffs and other voters at risk of deprivation of their fundamental right to cast an effective vote that is accurately counted … [the risks] are neither hypothetical nor remote under the current circumstances.”

One report studied the nearly 9,000 individual updates to the vote totals in all 50 states and found that four individual updates are profoundly anomalous — they deviate from a pattern that is otherwise found in the vast majority of the remaining 8,954 updates. In the states of Michigan, Wisconsin, and Georgia — which flipped 42 electoral votes from Trump to Biden — incredible “bumps” handed Biden those states. For this to happen, these voting updates would have had to have taken the votes almost totally for Biden. Yet, we do not see these overwhelming margins with smaller vote updates with mail-in votes.

All of these “updates” happened within a five-hour window.

President Trump’s lawyer, Rudy Giuliani, called Dominion a “radical left” company, and claimed it had the ability to allow votes “to be mirrored and monitored, allowing an intervening party a real-time understanding of how many votes will be needed to gain an electoral advantage.”

Giuliani has also responded to those who charge that he is threatening to “disqualify” voters. “We don’t want to disenfranchise anyone. We want to disqualify 672,000 votes so 72 million people are not disenfranchised. Because that’s what happened by the cheating that went on here.”

Americans loving riots? Justin Blake, the uncle of Jacob Blake, whose shooting by police officers in Kenosha, Wisconsin — a key swing state that Biden supposedly flipped from Trump — led to riots, watches election returns on November 3. Democrat-led riots and defunding police gained support for Trump. Wisconsin was one of several states where massive voting irregularities have put a cloud over the results. (Photo credit: AP Images)

Certainly, this is a serious matter, and it is understandable that many Americans simply do not want to believe that their country — the United States of America — has allowed its election system to degenerate to a level found in banana republics and regimes led by dictators.

Some fear that if Biden’s apparent victory is overturned as a result of these serious charges of widespread fraud, it will result in riots. But in fact, were the situation reversed and there was this much evidence that Trump had won by fraud, the media would be repeating these charges around the clock, and rioters would already be in the streets across the country, burning down buildings and looting stores of flat-screen TVs. As it is, it is not that the Democrats or their media allies are challenging these allegations and proving them wrong. They are simply refusing to cover this information at all, except to say that Trump and his supporters are making unsupportable charges of fraud and spouting “conspiracy theories,” as if they themselves did not do that for three years with their baseless Russian collusion accusations.

Federal Election Commission Chairman Try Trainor recently said during an appearance on Newsmax that we have witnessed an “illegitimate election.”

“I do believe,” Trainor said, “that there is voter fraud taking place. Otherwise they would allow the observers to go in.… When you have claims of 10,000 people who don’t live in the state of Nevada having voted in Nevada, when you have the video showing where people are either duplicating a spoiled ballot right there, or they’re in the process of just marking a ballot that came in blank for a voter, that’s a process that needs to be observed by election observers.”

Some even suggested that state legislatures either appoint electors who will vote for Trump, or perhaps not appoint any electors. If enough states had done that, and neither candidate had the minimum number of 270 electoral votes needed to have an Electoral College majority, the election would have been decided in the House of Representatives.

If that happened, it would no doubt strain the social fabric of the United States, and that would be regrettable. However, the casting of doubt on the 2016 election, with the phony Russia investigation and Hillary Clinton saying the Russians “hacked” the election (clearly implying that the election was stolen from her in 2016), has already done that. Actions taken by election officials and others across multiple states have cast doubt on the 2020 presidential race, and they are the ones responsible for tearing the social fabric.

If enough of the allegations that are detailed in this article are true, then we have had an American presidential election stolen. America’s elected officials, including state legislators, including need to hear from you — their constituents — that we will not tolerate the continuation of such fraud and that we will not tolerate their inaction, allowing this to happen again.