Democrat Governors Freed the Criminals and Killed the Elderly 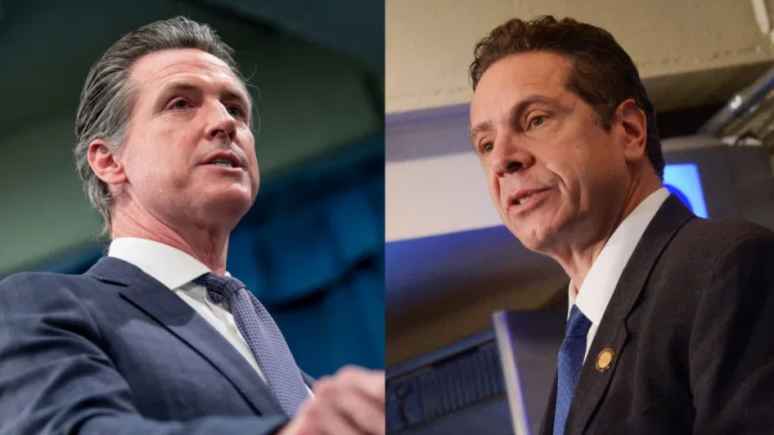 Democrat Governors Freed the Criminals and Killed the Elderly

They released criminals to protect them from the virus – and locked nursing home patients in with the virus.

In March, Governor Cuomo’s administration ordered nursing homes to accept infected coronavirus patients and prohibited even testing incoming patients for the virus. The same month that Cuomo began the process of infecting countless nursing home residents with the virus, he also began freeing thousands of criminals from prison to protect them from the virus.

Over 3,000 criminals have been freed from New York State prisons to protect them from the virus, and New York City’s Mayor Bill de Blasio freed 1,500 criminals, and they swiftly began committing a variety of crimes, but despite the media hype claiming that prison was a death sentence and a campaign by woke celebs like John Legend, criminals were not at risk.

Only 19 inmates in New York State actually died of the virus.

Meanwhile an estimated 11,000 nursing home patients have died of the virus statewide.

Unlike the prison numbers, which are easily accessible, the Cuomo administration has stonewalled and refused to provide the actual number of deaths, instead offering only an incomplete listing of only those nursing home residents who died in the actual facilities.

While Governor Cuomo took great care to protect criminals, very few of whom died of the virus, he condemned thousands of nursing home patients to a slow and miserable death. And the media and celebrities who advocated for rapists and killers showed no interest in their fate.

But it wasn’t just Cuomo.

In California, Governor Newsom ordered skilled nursing facilities to accept infected patients. The next month, 3,500 criminals were freed. By the fall, over 9,000 criminals had been freed, with a plan to release as many as 17,600 criminals. After an ACLU lawsuit, Orange County was ordered to free 1,800 violent inmates whom Sheriff Barnes described as “people in for very serious offenses — murder, attempted murder, and domestic violence.”

96 California State prison inmates have died in the pandemic alongside an official death toll of 5,940 nursing home residents.

New Jersey released 2,258 criminals in one day to slow the spread of the virus.

“Since the beginning of the COVID-19 pandemic, our administration has worked tirelessly to save as many lives as possible,” Governor Phil Murphy falsely claimed. Then he bragged that, “the population in State correctional facilities has decreased by nearly 3,000 people.”

This wasn’t good enough for Senator Booker who demanded that Murphy release more criminals, claiming that he could “save the lives of tens of thousands” of criminals.

Just not of their victims.

Only 52 criminals in New Jersey custody have actually died of the virus.

The former Goldman Sachs executive who started his career in politics by buying an ambassadorship from Obama was far less compassionate to the elderly than he was to his own kind. His administration signed a death sentence for thousands of senior citizens by ordering nursing homes to accept infected patients and banned them from using coronavirus tests.

Over 7,400 nursing home residents died of the pandemic in New Jersey. Some of the hardest hit residents were veterans living in nursing homes managed by the New Jersey government.

Governor Pritzker in Illinois released around 4,000 criminals from prison, including 64 murderers, using the same Disaster Proclamation that he used to lock residents in their homes, while failing to notify their victims. Only 50 prison inmates actually died in Illinois.

Democrat officials repeatedly prioritized criminals over nursing home residents, releasing the former to protect them from getting the virus while locking up the latter with the virus.

Had the Democrats set out to deliberately kill 100,000 senior citizens, they couldn’t have done a better job than the policies enacted by the Cuomo, Newsom, Murphy, Whitmer, Wolf, Pritzker, and other Democrat administrations.

And now that the vaccine is being rolled out, the welfare of criminals remains a top priority.

Rep. Ayanna Pressley, a member of the socialist squad, vowed to fight, “for incarcerated men and women to be prioritized in the distribution of the vaccine.”

A report by the National Academies of Sciences, Engineering, and Medicine being utilized by the CDC recommended placing criminals and homeless vagrants in phase 1b, the second phase, alongside nursing home residents, as if their risk or moral standing were equivalent.

D.C. and a number of states are indeed putting criminals ahead of much of the population.

But after all the agonizing from Democrats, activists, and the media over outbreaks in prisons, 149 federal inmates out of 124,538, and 551 state prison inmates out of some 1.2 million died.

The only prison coronavirus crisis was caused by the release of criminals back onto the street.

The plight of criminals facing coronavirus in prison has led to celebrity awareness campaigns, protests with lefty activists chanting, “Free Them All”, massive media coverage that describe every prison death as another “grim milestone”, and special interventions by governors, mayors, and judges on behalf of the worst people in our society outside of politics and the press.

Meanwhile the deaths of 113,981 nursing home patients, a true grim milestone, have passed unnoticed with no word from any celebrity, no protest, and hardly a whisper.

Democrat governors not only haven’t intervened on their behalf, but helped kill them.

New York, New Jersey, Pennsylvania, Illinois, Michigan, and California, the states run by Cuomo, Murphy, Wolf, Pritzker, and Newsom, who pushed infected patients into nursing homes, account for some 40,000 deaths among nursing home patients. These numbers are incomplete because of the deliberate obstruction of some of these administrations, notably those of Cuomo, Murphy, and Pritzker, when providing accurate and comprehensive statistics of these deaths.

While Democrats fought to help criminals, they neglected and killed the elderly.

The media has run more high profile coverage of the deaths of a few hundred criminals in custody, out of millions, than of the deaths of 113,981 nursing home patients. And even now it urgently warns that the criminals are in danger and must be freed before they all die. Certainly, it insists, they should be early in line for the vaccine even though very few criminals have died.

The true story of the pandemic’s grim milestone is that the Democrats freed the criminals to protect them from the virus and locked nursing home patients, who were the most vulnerable, in with those infected with the virus. Now they want to prioritize criminals for the vaccine.

And that stands to reason.

As pro-crime felon voting laws sweep the nation, the Democrats are fighting to keep their voting base of criminals free, while killing the elderly who are more likely to be conservative.

They didn’t mismanage a pandemic. They managed a political genocide.

Daniel Greenfield, a Shillman Journalism Fellow at the Freedom Center, is an investigative journalist and writer focusing on the radical Left and Islamic terrorism