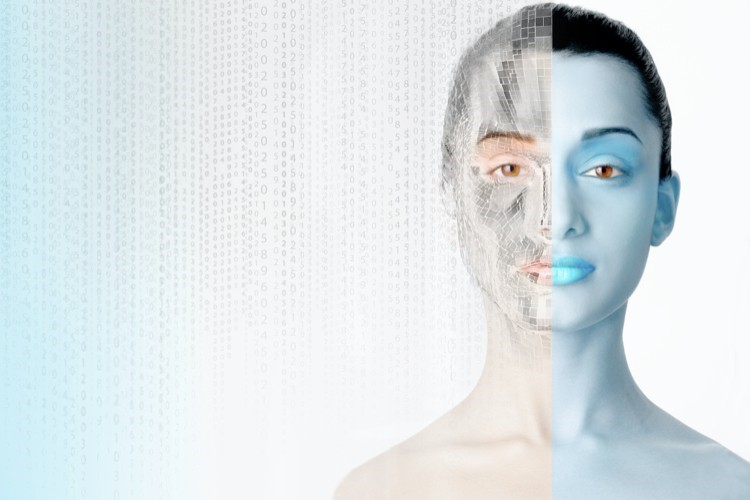 Under the new world order envisioned by the proponents of the United Nations-backed “Great Reset,” humans will be merged with machines and technology. Literally. Perhaps most incredibly, the Deep State globalists behind the efforts are coming out of the closet. These days, they are openly and literally proclaiming their intention to abolish private ownership of property and even fuse microchips into people’s brains that will be able to read and manipulate individuals’ thoughts.

Just last year, the schemes peddled under the “Great Reset” banner would have been dismissed as “crazy conspiracy theories.” Today, top globalists such as World Economic Forum boss Klaus Schwab, UN chief (and socialist leader) Antonio Guterres, IMF leader Kristalina Georgieva, and others are trumpeting their agenda from the rooftops. World leaders such as far-left Canadian Prime Minister Justin Trudeau are doing it too, despite frantic efforts by the fake media to downplay the significance.

As The New American reported this summer, shortly after the “Great Reset” agenda was unveiled, there are many elements to the plot. Everything must change, from education and business to the global economy and governance, Great Reset advocates declared during the summit announcing the scheme. However, one area that has not received nearly as much attention is the plan to fuse human beings with technology under the guise of “improving” mankind.

WEF chief Schwab, the chief marketer of the Great Reset who recently released a book with that title, has proclaimed that a key element of the “reset” will be the so-called “Fourth Industrial Revolution.” And in very public statements, he has explained what this means: merging man with machines. “What the fourth industrial revolution will lead to is a fusion of our physical, digital and biological identity,” Schwab explained in a speech to the Chicago Council on Global Affairs.

Schwab, whose accent and demeanor make him appear to be almost a caricature of some evil cartoon villain, even wrote a book on the subject in 2016 entitled Shaping the Future of The Fourth Industrial Revolution. In it, the globalist schemer explains how looming technological changes will allow governments to “intrude into the hitherto private space of our minds, reading our thoughts and influencing our behavior.” 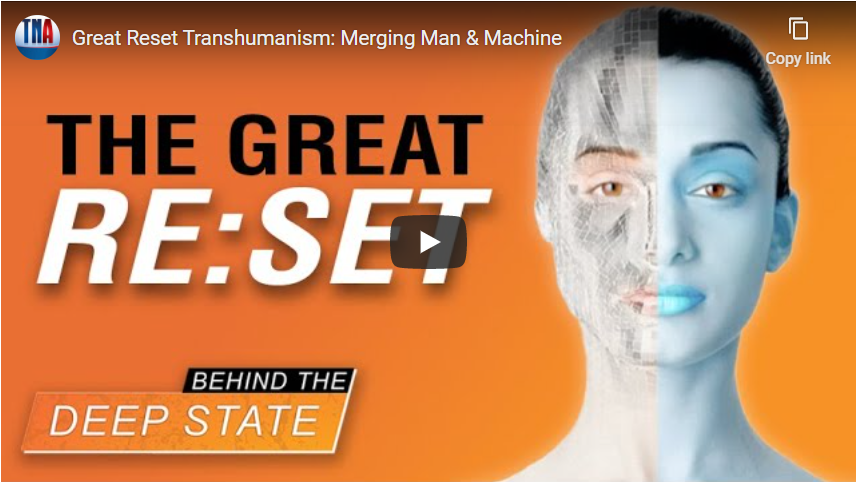 “Fourth Industrial Revolution technologies will not stop at becoming part of the physical world around us — they will become part of us,” continued Schwab. “Indeed, some of us already feel that our smartphones have become an extension of ourselves. Today’s external devices — from wearable computers to virtual reality headsets — will almost certainly become implantable in our bodies and brains.”

Among those technologies are “active implantable microchips that break the skin barrier of our bodies,” Schwab explained. These “implantable devices,” Schwab continued, “will likely also help to communicate thoughts normally expressed verbally through a ‘built-in’ smartphone, and potentially unexpressed thoughts or moods by reading brain waves and other signals.”

Even more creepy, perhaps, is that Schwab suggested these technologies would be used by governments to determine who may travel and even for “pre-crime” purposes. “As capabilities in this area improve, the temptation for law enforcement agencies and courts to use techniques to determine the likelihood of criminal activity, assess guilt or even possibly retrieve memories directly from people’s brains will increase,” he explained, adding that authorities might require “a detailed brain scan to assess an individual’s security risk.”

In a post on the WEF website by Danish Parliamentarian Ida Auken, the direction and goals of all this transhumanism become more clear. “Welcome to the year 2030,” Auken writes. “I don’t own anything,” including a home, and “I have no real privacy. No where I can go and not be registered. I know that, somewhere, everything I do, think and dream of is recorded.” But her biggest concern is those who refuse to participate.

“My biggest concern is all the people who do not live in our city,” Auken explains, noting that some stubborn individuals refused to merge with machines. “Those we lost on the way. Those who decided that it became too much, all this technology. Those who felt obsolete and useless when robots and AI took over big parts of our jobs. Those who got upset with the political system and turned against it.”

The push toward transhumanism and merging with computers is becoming especially obvious in the “education” system amid the hysteria surrounding COVID. From moving everything online and sidelining teachers to bringing in Artificial Intelligence and algorithms, the technology is getting downright creepy. Huge totalitarian firms such as Google, which brazenly discriminates against Christians and conservatives, are key players as they gather enormous amounts of sensitive data on children and blatantly manipulate the public.

The WEF, which is leading the push with help from the UN and the IMF, is a powerhouse. Every year, it brings together billionaires and even mass-murdering dictators from around the world to promote globalism and technocracy under the guise of “helping” humanity. Naturally, all of the major tech companies — Facebook, Alphabet, Microsoft, and so on — are intimately involved. Fringe billionaire totalitarians such as George Soros are key players, too.

The push for the “Great Reset” is hardly the first time the elites have peddled the trans-humanist agenda. At the 2018 “World Government Summit” in the United Arab Emirates, top globalists and “world leaders” gathered to push, among other key themes, the normalization and glorification of “cyborgs.” Indeed, the confab, which brings together top leaders of government and business, offered a prominent role to a self-proclaimed “cyborg” named Neil Harbisson, who argued that governments must facilitate the transition to at least some people becoming “part-technology, part-human.”

“I have an antenna that is implanted inside my head, which allows me to extend my perception of reality beyond the visual spectrum,” said Harbisson, co-founder of the Cyborg Society and the Transpecies Society which fight for people who “identify” as non-human. “I can sense infrared and ultraviolet, and I also have an internet connection in my head that allows me to receive colors from other parts of the world, or connect to satellites so I can send colors from space.”

The year before that, globalists at the World Government Summit gathered under a replica of the “Arch of Baal,” a monument to the demon god of the Canaanites frequently referred to in the Bible. More than a few commentators saw it as an ominous sign.

Aside from the fusion with machines and technology, globalist elites are also pushing for genetic modification of everything — including humans. In fact, Microsoft tycoon Bill Gates has openly pushed for such schemes. In 2018, he touted gene-editing technology in Foreign Affairs, the mouthpiece of the globalist Deep State organ known as the Council on Foreign Relations. More recently, he has celebrated vaccines that literally alter the genetic code of those receiving them.

The transhumanist movement has been on the fringes, under the radar, for decades. In the late 1990s, Swedish economist Nick Bostrom of Oxford and British “philosopher” David Pearce founded the World Transhumanist Association. And more recently, in his book Homo Deus, Israeli author and historian Yuval Noah Harari has also been peddling the idea that mankind is on the verge of evolving to god-like status through technology. Ultimately, humans would be re-designed using genetic modification and technological “upgrades.”

“It is very likely, within a century or two, Homo sapiens, as we have known it for thousands of years, will disappear,” Harari said at the Carnegie Council for Ethics in International Affairs recently. “We will use technology to upgrade ourselves — or at least some of us — into something different; something which is far more different from us than we are different from Neanderthals.” The establishment media has been breathlessly parroting his propaganda.

Of course, the advancement of transhumanism requires a destruction of Christian moral principles and a negation of the fundamental truths about humanity and reality that revealed in the Bible, analysts have observed. Indeed, many of the leading proponents of transhumanism believe their route to “eternal life” involves uploading their consciousness to a computer and merging with technology.

One of the prominent experts speaking out against it all is Dr. Miklos Lukacs de Pereny, a professor of science and technology policy at Peru’s Universidad San Martin. “The Fourth Industrial Revolution is literally, as they say, a transformative revolution, not just in terms of the tools that you will use to modify your environment, but for the first time in human history to modify human beings themselves,” he told LifeSiteNews, adding that he believed the COVID-19 hysteria was being engineered to enable the Great Reset transformation.

Even though world leaders are openly talking about it all, in response to a public backlash, far-left fake-media outlets such as the New York Times and the BBC are currently engaged in frantic “damage control.” Incredibly, they are even falsely claiming the Great Reset is a “baseless conspiracy theory.” Apparently New York Times writer Davey Alba is not familiar with the definition of the word conspiracy. He also reported on his efforts to pester Big Tech social-media firms about censoring people’s comments about it.

If the comments under its videos on YouTube are any indication, the globalist Great Reset is less popular than cockroaches and head lice. However, that does not mean the Deep State will give up on trying to advance its agenda under the slogan, which fits nicely with the UN and Biden, “Build Back Better” and the schemes outlined in UN Agenda 2030. It is basically the same old “New World Order” agenda, complete with the elimination of private property, privacy, self-government, and nation-states, now fused with transhumanism. Those who value truth, liberty, and humanity must resist.