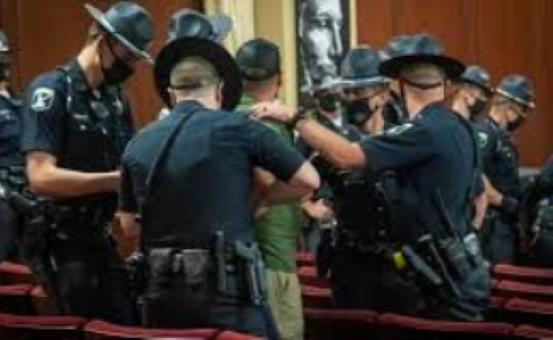 There were several arrests made today in the Lincoln Auditorium at the Capitol and it is going to be completely misinterpreted and completely blown out of proportion by the news media.  So I want to give you a clear picture of what actually happened.  Because it was all quite ridiculous and a major distraction from what Patriots were trying to accomplish today.

But first, let me answer two questions that have come up multiple times:

How can someone be arrested for “trespassing” on public property during operating hours? Generally speaking, one should not be able to be arrested for this reason.  But, as we have seen over and over and again in recent history, law enforcement no longer follows common sense nor the law when it comes to their selective means of enforcement.  In short, they do whatever they want and are protected by “qualified immunity” laws.  You can stand still, doing absolutely nothing, while law enforcement officials brutally attack you and beat you, and then have them charge you with “resisting arrest.”  In fact, this is quite common—for all “colors” of people.  And this brings to mind the reality that the only laws that really exist and the only rights you actually have are the ones you fight for.

So with those questions answered, let’s talk about what happened today…

SUMMARY OF WHAT HAPPENED:

In the Lincoln Auditorium, the committee which was discussing the civil liability immunity bill, chaired by Greg Chaney, began their meeting.  However, 2 “citizen journalists” without house-approved press passes sat down in the area of the Lincoln Auditorium reserved for the press.  Nevertheless, these citizen journalists decided they wanted to sit in this special area, and while there was no good reason for him to do so, Chairman Greg Chaney asked them to leave the area since they were not wearing the standard house-approved press passes.  When they refused to leave the area, Chairman Chaney called for a recess and police were brought in to remove them forcefully. One of them was arrested.  Videos of the event show the police using an unbelievable show of force to arrest and remove this singular, non-threatening journalist.

Later in the day, as several Patriots, including Ammon Bundy decided to stay in the Lincoln Auditorium, the Idaho State Police, choosing to use the same excuse that all oppressive police forces have used—which is to say, “I’m just doing my job,” returned with a show of force (over 20 police officers) to arrest anyone and everyone who refused to leave the Lincoln Auditorium.  (NOTE – the Capitol building is open to the public during regular business hours which are usually 7 am to 7 pm, Monday through Friday, though those hours are subject to change without notice.) 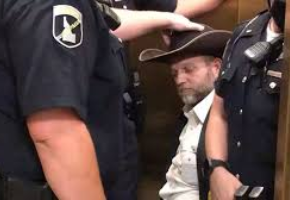 Ammon Bundy and another man refused to leave so they were arrested.  Video of the event shows Ammon sitting down peacefully in a wheeled chair doing absolutely nothing.  The police came and zip-tied him to the chair, and then wheeled him out.  Later another woman who was trying to film from outside of the room, was barked at by an abusive ISP officer who told her, “Come inside if you want to get arrested.”  When she got close enough to film through the door entrance, she was grabbed by the neck, thrown inside, and also arrested.  This is a clear abuse of force and a violation of her rights and it as all clearly seen on video.

WHAT WE WISH HAPPENED

It’s always easy to play armchair quarterback and to talk about what should have happened after-the-fact.  But while we can’t go back in time to redo what has been done, at the very least we should learn from what happened to prevent these things from happening in the future.

Anyhow, that is the review of what happened.  I don’t want you to be uninformed because this is going to be twisted in unbelievable ways in the FAKE NEWS.