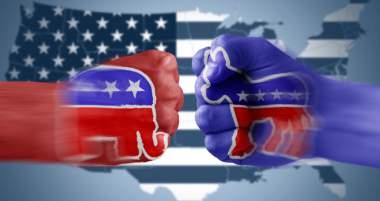 A group of Republican House members led by Representative Louis Gohmert (Texas) introduced a resolution last week that would ban the Dermocratic Party from the House or require it to change its name due to its historical ties to slavery and racism — a dig at Democrats’s recent attempts at purging the Capitol of statues of Confederate-linked historical figures.

The co-sponsors of the resolution include GOP Representatives Andy Biggs (Ariz), Jody Hice (Ga.), Randy Weber (Texas), and Andy Harris (Md.). According to a statement, Gomert’s proposal would “ban any political organization or party that has ever held a public position supportive of slavery or the Confederate States of America.”

Additionally, it calls on House Speaker Nancy Pelosi (D-Calif.) to “remove from the House wing of the U.S. Capitol or any House office building any item that names, symbolizes or mentions any political organization or party that supported slavery or the Confederacy.”

The text of the resolution lists the Democrats’ history of slavery and racism ties, including the party’s opposition to the 14th and 15th Amendments and President Woodrow Wilson’s initiation of a racial segregation policy for U.S. government employees.

As outlined in the resolution, a great portion of the history of the Democratic Party is filled with racism and hatred. Since people are demanding we rid ourselves of the entities, symbols, and reminders of the repugnant aspects of our past, then the time has come for Democrats to acknowledge their party’s loathsome and bigoted past, and consider changing their party name to something that isn’t so blatantly and offensively tied to slavery, Jim Crow, discrimination, and the Ku Klux Klan.

As the country watches violent leftists burn our cities, tear down our statues and call upon every school, military base and city street to be renamed, it is important to note that past atrocities these radicals claim to be so violently offensive were largely committed by members in good standing of the Democratic Party. Whether it be supporting the most vile forms of racism or actively working against Civil Rights legislation, Democrats in this country perpetuated these abhorrent forms of discrimination and violence practically since their party’s inception.

Gohmert concluded by saying that to “avoid triggering innocent bystanders by the racist past of the Democratic Party, I would suggest they change their name. That is the standard to which they are holding everyone else, so the name change needs to occur.”

The House voted 305-113 on Wednesday to approve legislation that would remove statues in the Capitol Building of people who served in the Confederacy or are in some way accused of racism.

Under the current statue collection rules, each state contributes two statues and can only replace them if the state legislature and governor agree to it. Passed on Wednesday, the bill would require any Confederate statues to be removed from public display and be donated to the Smithsonian or sent to the National Statuary Hall Collection.

“Today, the House is taking a long overdue and historic step to ensure that individuals we honor here in our Capitol represent our nation’s highest ideals and not the worst in its history,” said House Majority Leader Steny Hoyer (D-Md.) ahead of the vote.

Gohmert criticized the legislation, saying that it “failed to address the most ever-present historical stigma of the United States Capitol, that is the source that so fervently supported, condoned and fought for slavery that was left untouched, but without whom, the evil of slavery could never have continued as it did to such extremes that it necessary to address here in order for the U.S. House of Representatives to avoid degradation of historical fact and blatant hypocrisy for generations to come.”

The bill awaits a vote in the Republican-controlled Senate.

Democrats’ bill comes as the progressives around the country seek to take down monuments and statues about the Confederacy as part of a wave of so-called social justice unleashed after the death of George Floyd. The movement includes calls to defund the police and has resulted in destructive riots and deadly attacks on police officers.