‘If I Were the Devil’ 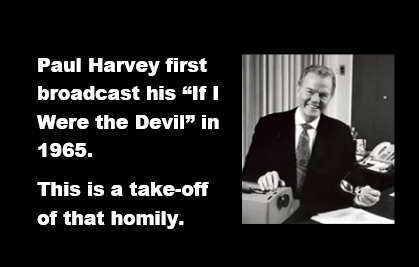 ‘If I Were the Devil’

Paul Harvey first wrote a commentary with the same title in 1965.

I am a Jew who took Jesus Christ as my savior almost 30 years ago.

Today, I feel the devil all around us, like never before in my lifetime … in any lifetime.

This coronavirus crisis has the devil’s evil fingerprints all over it.

If I were the devil, if evil were my middle name, I’d love the deep state, the corrupt Washington, D.C., swamp and, most of all, its PR division, the liberal media.

I’d love big government, globalists, communists, socialists and Marxists — anyone who would put the American people in misery and slavery.

I’d dedicate my life to anything and anyone who’d destroy the American dream, opportunity and mobility. Because, of course, the devil loves misery.

I’d want to enslave the American people to big government, ruin their exceptionalism, make them ordinary citizens of a global army of serfs.

I’d want America to be no different than Cuba, Venezuela, Haiti or Mexico. Why should America escape my misery and pain?

I’d give my support to anyone who’d take the American dream away.

And more than anything, I’d hate President Donald J Trump.

I’d hate anyone who wants to make America great again.

I’d want to wipe that smirk right off the faces of Americans who love their country and God. I’d want them to suffer.

To accomplish all this …

I’d want to create a pandemic just like the coronavirus.

It would wipe away all of Trump’s amazing, magical and miraculous economic achievements of the past three years … in just a matter of a few shocking, depressing, tragic weeks.

It would crash the stock market; collapse the oil and energy markets; kill over 30 million jobs; close the entire U.S. economy; shutter millions of small businesses.

It would turn tens of millions of Americans into welfare addicts and wards of the state; eliminate Trump’s 20,000-person stadium rallies; overwhelm the entire economic system; bring business owners to their knees; and make big government the only option to save a drowning nation no longer so “exceptional.”

I’d root for a massive overreaction that leaves America shocked, depressed and weakened. And the government’s reaction would be to spend so much money it would leave America crippled by unimaginable debt for decades to come.

I’d laugh and do a dance to celebrate all the rich and powerful business owners left with nothing, reduced to begging big government to bail them out.

And obviously, I’d hate Christianity more than even America or Trump.

I’d create something so vile and frightening it would close down churches and prevent Easter church services for the first time in the history of America.

As a bonus, I’d want everyone in America to be not only broke, scared and humbled but also miserable.

So, I’d eliminate all sports; close down movie theaters; shut down Las Vegas, air travel and cruise ships; cancel vacations and weddings. There would be no way out — except misery, depression and loneliness.

Sex? All dating would be canceled. No one could come within six feet of each other.

Except for Neil Ferguson, the U.K. scientist who scammed the whole world with hysterical, exaggerated claims and then apparently violated social distancing to have an affair with a married woman.

That Ferguson is my kind of guy — a real devil!

Folks, do you understand now?

We’ve all just met the devil. The coronavirus was his greatest creation yet. This was his “Mona Lisa.” The devil is dancing in hell.

Make no mistake about it. We are under massive attack. This pandemic has the devil’s fingerprints all over it. It’s invisible — just like the devil himself.

These are the moments that can break even exceptional people. But we are America. We are relentless. We are blessed by God. And, yes, we are exceptional.

If anyone can reverse this, Trump can, just as he reversed former President Barack Obama’s miserable economy in a matter of months.

Remember, Lucifer’s plan was to take away human Agency.  To deny choice.

Take a look at all of the forces and even the “religions” on Earth that seek to do that.

They are of the devil.