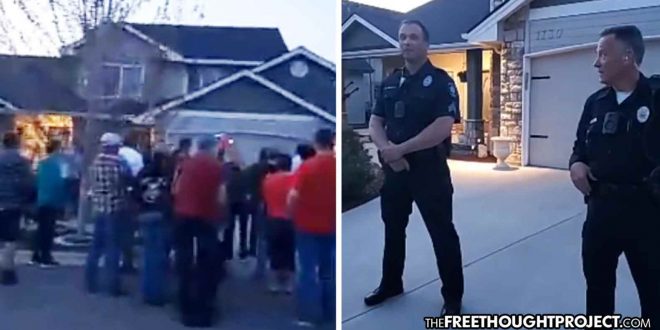 Meridian, ID — Over the past several weeks, unrest around the country has grown due to the now 24 million jobless claims, and politically motivated, arbitrary nature of executive orders from coast to coast. Many people are upset and are expressing that anger in the form of peaceful protests all over the country. Naturally, as with any political statement, it has been crammed into the two-party information separator and has come out a divisive and polarizing hot mess. However, this is not necessarily a bad thing.

For years, conservatives — who claim to support ‘small government’ — have cheered on the police state, waiving their blue line American flags and shaming those who advocated police accountability. All the while, America’s law enforcement system amassed military-grade weaponry, voted themselves into a protected class, continued to enforce unconstitutional laws, and set the stage for total authoritarian control.

When football players started taking knees, even the President of the United States used his pulpit to publicly shame them for daring to speak out against innocent minorities getting beaten and killed by cops. At one point the hatred for police accountability activism became so overwhelming that so-called conservatives took to lighting their shoes on fire after Nike ran an ad with outspoken police brutality advocate Collin Kaepernick.

Any time there was a protest against police brutality after one of the countless young black men were killed in this country — many of whom were unarmed and innocent — these conservatives took to their social media podiums and advocated running them down in the streets for exercising their First Amendment rights. In a few instances, they actually did run over police brutality protesters and at one point they even tried to make it legal to to do so!

For years, this duality has existed and for years, the right’s establishment-granted role was to unquestioningly cheer on the police state — until now.

We now find ourselves in an extremely rare time in which we see outspoken conservatives and those on the right, protesting the police. As governors across the country hand out their arbitrary shut down orders, declaring liquor stores essential while shutting down gun stores, or declaring abortions essential while not allowing knee replacements, Americans started getting angry. Now, they are in the streets as many of them realize the governors’ decrees are but meaningless words without their enforcers—the cops.

An entire thread on Twitter this week was devoted to conservatives calling out one of their own who said that cops arresting people for playing in parks, surfing, handing out food, etc., “are just doing their jobs.” Memes of nazis killing Jews flooded the thread with the words “just doing our jobs,” plastered across them. Other prominent conservative voices took to calling cops “tyrants” for arresting protesters and demanding they be fired or find new jobs. It appears, for now, that the right may have finally begun to question the police state they once so adamantly worshiped.

All of this came to a head this week when a video of Sara Walton Brady’s arrest went viral. Brady helped to organize a protest over the weekend in which moms would take their kids to play in the park — an act hardly comparable to Rosa Parks, but civilly disobedient nonetheless. Brady was arrested, according to police, because she refused to leave when police demanded the kids stop playing in the park.

The video caused outrage across the internet and manifested into a massive act of police accountability. After Brady’s arrest, dozens of protesters went to the home of the Meridian Police Department officer who arrested Brady. The protest was reportedly spearheaded by Ammon Bundy, who as TFTP reported last week, has been planning resistance to the lockdowns.

As the crowd grew larger at the officer’s home, his fellow cops helped guard him.

“There was a woman at a park with her children and she was arrested!” Bundy screams at the four or five cops standing in the driveway. “Completely inappropriate.”

The cops seemed receptive to the message and appeared to have an actual conversation with the protesters instead of simply ignoring them. This is a good thing. 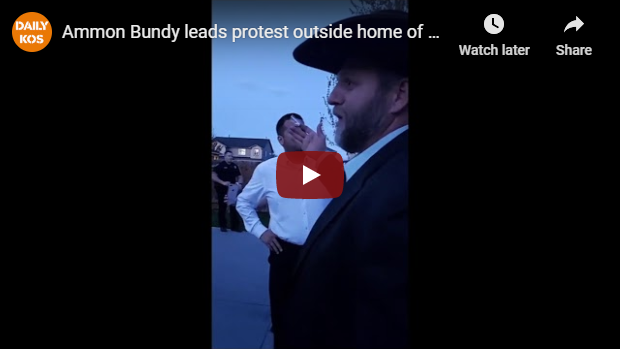 Naturally, the left is calling the protest in front of the cop’s home, an act of extremism. The same outlet that supported protests when it fit their narrative, now refers to others as “extremists” for similarly flexing their rights. They also attempted to smear the woman who was arrested because she reportedly chooses to abstain from vaccination….the horror. Shame on you HuffPo.

Is supporting the Constitution, even in an instance of a pandemic, really that “extreme”? That is a debate we need to start having right now. The longer the lockdowns stay in place, the more unrest will unfold and a scene far worse than what is happening in New York hospitals is likely to materialize.

The good news is that the empirical data is becoming undeniable at this point, which means we may soon see a light at the end of this lockdown tunnel.

In an oped at thehill.com, Dr. Atlas claimed that it is now time to stop the panic and end the total isolation. He noted that the previous fearful strategies were based on hypothetical projections, largely revamped and disproved. This Senior Fellow at Stanford University said it is time for our leaders to “examine accumulated data to see what has actually happened, rather than keep emphasizing hypothetical projections; combine that empirical evidence with fundamental principles of biology established for decades; and then thoughtfully restore the country to function.”

It is hard to disagree with him.