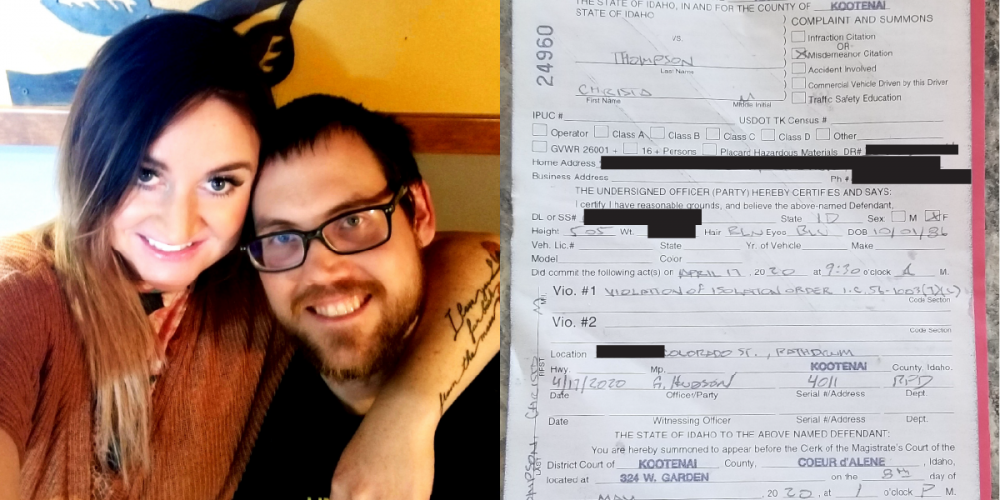 Christa Thompson of Rathdrum might be the first Idahoan charged for violating Gov. Brad Little’s stay-home order, which he first issued in late March and renewed April 15.

Police issued the misdemeanor charge on Friday. According to Idaho law, Christa faces a fine of up to $1,000 and up to 6 months in jail.

Weeks ago, Peter’s father passed. As the only child, he was left to dispose of his father’s belongings.

My dad “probably should have been on that show about hoarding,” Peter joked.

The family had a significant financial incentive to deal with the belongings of Peter’s late father: After the death, the family had taken over his storage-unit payments, which were about $1,000 a month. That sum is, according to Peter, a significant burden for a one-income family with six kids.

Peter and Christa dutifully hauled the belongings to their front yard, near the busy Highway 41 in Rathdrum. From then they actively advertised and sold stuff, until local police showed up to enforce the stay-home order.

Police deemed the yard sale non-essential. Officers ordered the couple to remove all signage but, Peter said, the police allowed the couple to leave their stuff in the front yard for sorting.

During the Rathdrum Police Department’s fourth and final visit to the residence on Friday, April 17, officers issued a misdemeanor charge to Christa. Peter does not know why officers didn’t cite him.

On Friday evening, the Rathdrum Police Department took to Facebook to confirm the charge and explain their action. The department’s entire post can be seen here.

In that post, the city’s police chief, Tomi McClean, emphasizes the agency’s patience with the Thompsons concerning the yard sale. He noted, the city’s officers gave multiple warnings before charging Christa on Friday.

“The Rathdrum Police Department attempted to educate and warn prior to issuing a citation,” McLean wrote on the social media site. “Rathdrum PD has also received several complaints from the public in regard to the yard sale. This was a large non-essential yard sale that filled the entire front yard and spilled into the back yard as well.”

That post drew hundreds of comments, many of which ridiculed the department for its overbearing response.

“You know, people don’t have to go to the yard sale,” wrote Diane Murr of Post Falls. “Obviously neither the buyers or sellers feel concerned. I think people should be given responsibility back to be responsible again. Are we going to police each other for nothing forever?”

Peter told the Idaho Freedom Foundation that he and Christa will fight the charge. The couple may already have help.

Edward Dindinger, a trial attorney in Boise, said he’s interested in the case. Asked his opinion of the charge, Dindinger suggested it won’t stand in court. He added that the police department ought to deal with more serious matters.

“The fact that officers of this department took the time to seek out and arbitrarily cite this individual indicates to me the Rathdrum Police Department has far too much time on its hands and is perhaps itself ‘non-essential,’” the Boise attorney wrote to the Idaho Freedom Foundation.

He continued, “Maybe budgetary and/or staff cuts are appropriate so at least some members of the RPD can feel the pain this order is causing to ordinary, working-class Idahoans and join those of us in the productive sector on the front lines of reopening this great state.”

As for the Thompsons, they plan to sell Peter’s father’s belongings next week.

They will continue transactions throughout the process.  Peter said the publicity on social media and on local news outlets has caused an uptick in traffic to his Rathdrum home.