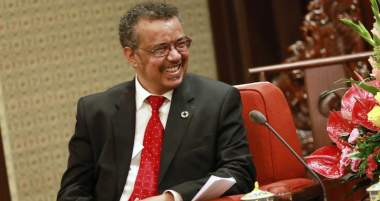 With United Nations World Health Organization Director-General Tedros Adhanom Ghebreyesus of Ethiopia serving as a mouthpiece for the Communist Party of China on the global stage, questions and concerns about his shadowy communist past are growing louder. Considering his scandal-plagued background, critics have gone so far as to say that “Marxist revolutionary” Tedros should be on trial for crimes against humanity — not sitting atop the WHO barking orders at national governments and peddling Beijing’s propaganda to humanity. So far, though, the establishment media has largely remained silent about the emerging firestorm.

As The New American reported shortly after his tenure began, Tedros, who has no medical degree but got the top UN job with fervent backing from Communist China, is an actual communist with a long pedigree in the movement. Before taking up his perch at the WHO, Tedros was most prominent for his government posts in a tyrannical regime, and for his key role in leading the murderous communist organization known as the Tigray People’s Liberation Front (TPLF). This ethno-Marxist terror group has declared war on freedom and other ethnic groups within Ethiopia. And Tedros played a major role, serving as a top member of the TPLF’s Politburo Central Committee, according to multiple news reports.

The U.S. government previously designated the Marxist group as a terrorist organization for its murders, kidnappings, terror attacks, and more. Citing at least a dozen terror attacks on private citizens, religious figures, private property, non-governmental organizations, journalists, and other targets spanning more than three decades, the Global Terror Database continues to list it as such. TPLF also joined forces with other mass-murdering Marxist-Leninist parties and formed the “Ethiopian People’s Revolutionary Democratic Front” (EPRDF), an alliance that today rules the nation despite having been formally disbanded last year.

While it claimed to have moderated its Marxism-Leninism since coming to power in the early 1990s, in reality, critics say EPRDF governed in a deeply corrupt and autocratic fashion. Tedros, the “right-hand man” of late dictator Meles Zenawi, served in multiple senior positions in the Ethiopian regime over those years, including a term as “health minister” and later a stint as “foreign minister.” His “service” has been widely criticized, so much so that his original biography on WHO’s website initially omitted several of the most important points in his career. That past is now coming back to haunt him as critics dig deep.

As “Minister of Health,” Tedros reportedly played a key role in covering up epidemics. Perhaps the most significant example was his concealing of multiple cholera outbreaks, falsely labeling them water-borne diarrhea and downplaying the crises. He also bullied bureaucrats into silence about these problems, news reports and critics say. Later, as “Minister of Foreign Affairs,” Tedros helped the regime hunt down journalists and dissidents, including those who fled abroad. Human Rights Watch and other groups drew global attention to the regime’s kidnapping and rendition of Andy Tsege, a British father of three who was tortured and tormented for years over his criticism of the dictatorship ruling Ethiopia.

The ethnic group that has been most ruthlessly targeted by Tedros’ TPLF is known as the Amhara. Under the regime of Tedros and his EPRDF cronies, Amhara leaders reported regular human-rights abuses. A U.S.-based group known as the Amhara Professionals Union (APU) publicly lambasted Tedros for his crimes. “APU believes Dr. Ghebreyesus lacks the competence, impartiality, accountability and transparency that we feel are required,” the group said, practically accusing the current WHO boss of pursuing genocidal policies against the Amhara through sub-standard healthcare and even “selective application of contraceptives” that undermined the group’s population growth.

“Such disparities were created and gaps increased across all measures of health in his leadership tenure,” the APU said about Tedros’ anti-Amhara campaign while serving the regime and his “fascist” political party. “Of particular importance is the unexplained 2.5 million decrease in the Amhara population under his healthcare leadership. The Amharas were victimized and punished due to their ethnic background…. Therefore, we at the APU, believe that it would be a travesty of justice if WHO awards its highest position to a person who violated WHO’s core principles and whose deliberate actions and inactions have claimed the lives of millions of Amhara people as well as other Ethiopians.”

The regime that Tedros helped lead also persecuted people in the Oromia region of Ethiopia as it sought to forcibly relocate some 15,000 people to make way for “investment” opportunities. Following the use of tear gas, mass killings ensued as police fired military weapons at disarmed victims outraged about the governmental abuse. That was followed by a government declaration of “emergency” and the mass arrests of some 70,000 people. In his role as foreign minister, Tedros helped track some dissidents down overseas, especially in nearby Yemen, something that drew the ire of British authorities at the time.

Since taking over the WHO with Beijing’s support, Tedros has continued to promote Marxist policies and individuals. Shortly after landing the job, for instance, he named mass-murdering Marxist dictator Robert Mugabe of Zimbabwe as a “Goodwill Ambassador” for the WHO. Mugabe, of course, was responsible for genocide against a rival ethnic group, slaughtering tens of thousands of people in an attempt to exterminate them. Tedros has also made a government takeover of healthcare worldwide — euphemistically dubbed “universal health coverage” — one of his top priorities during his term as WHO boss. Peddling “climate” hysteria as a “health” issue is also front and center, according to his own biography.

Some critics say Tedros should be put on trial for crimes against humanity. “If there was ever an example of the failure of globalized institutions, the WHO is it,” said analyst John Martin in a piece published by Rough Estimate headlined “The Crimes of Tedros Adhanom,” calling for the global outfit to be radically reformed or simply disbanded. “In a sane world, instead of leading a global organization, Tedros and his cronies would be put on trial at the International Criminal Court, tried for his crimes, and if found guilty, should spend the rest of his life in prison.”

Of course, as The New American has explained for decades, even the ICC is problematic. For one, it is dominated by the very same forces that put criminals such as Tedros into positions of power in “global governance” institutions to begin with. It also lacks legitimacy, and fails to include any of the traditional legal protections that Americans take for granted. It has been widely ridiculed as a globalist kangaroo court, and top legal experts have told this magazine that it should be disbanded as a fraud. The U.S. government has not ratified the agreement that brought it into existence.

Other critics have also blasted Tedros for his past. Writing in Ethiopian News & Views, for example, writer Abebe Gellaw slammed Tedros for playing the nice technocrat concerned about global health. “But his 12-page campaign CV never mentions his most important experience that made it possible for him to climb the ladder of power within the tyrannical regime oppressing and misruling Ethiopia,” wrote Gellaw, referring to the now-WHO boss and his “ethnofascist” group as a “gang” that was “responsible for all the corruption, killings, torture, mass detention, land grab and displacement” afflicting their homeland.

There is also the fact that Tedros is a boot-licking puppet for the Communist Chinese Party, which has murdered more people than any government in human history. “We appreciate the seriousness with which China is taking this outbreak, especially the commitment from top leadership, and the transparency they have demonstrated,” Tedros said in addition to blasting everyone who referred to SARS-CoV-2 as the “Chinese” virus or “Wuhan” virus. “China is actually setting a new standard for outbreak response.” He also blasted Trump’s ban on flights from China. Before Tedros, the WHO was run by Communist Chinese agent Margaret Chan.

Numerous current and former WHO officials have contacted The New American over the years to highlight the incredible corruption and mismanagement that permeates the UN “health” agency. Among those whistleblowers is Kari Laperriere, author of WHOligans: A witness account of fraud and bullying at the heart of the World Health Organization, who has exposed the “dark secrets” of WHO hiding behind “a respectable façade and the words of noble principles.” Laperriere, who spent decades working inside the UN, has sought to expose bullying and fraud perpetrated from the very top of the UN outfit, including by former WHO boss Chan of China.

Naturally, the entire UN system is using the Communist Chinese virus as a pretext to advance globalism and Big Government — the very same “solutions” offered by the UN to deal with everything from “climate change” to poverty. “Everything we do during and after this crisis must be with a strong focus on building more equal, inclusive and sustainable economies and societies that are more resilient in the face of pandemics, climate change, and the many other global challenges we face,” said UN boss António Guterres, the former head of the Socialist International alliance of communist and socialist political parties (many with the blood of millions on their hands). WHO is also working to become a global health ministry.

However, while WHO seeks more power and prestige, a growing chorus of U.S. lawmakers and media critics is calling for WHO to be investigated, de-funded, and even shut down completely. That would be a step in the right direction. But it would not neutralize the broader threat that the UN poses to American liberty, sovereignty, and self-government.

Legislation currently in Congress, known as the American Sovereignty Restoration Act, would end all U.S. government involvement in the UN. It is currently sitting in the House Foreign Affairs Committee. But with more support from Americans and potentially even from the White House, that dream could become a reality — forever neutralizing the ability of Marxist criminals such as Tedros to interfere in American life.

There has never been a better time for an AMEXIT from the UN!

Alex Newman, a foreign correspondent for The New American, regularly attends UN and international summits. He can be reached at anewman@thenewamerican.com or through Liberty Sentinel Media. Follow him on Twitter @ALEXNEWMAN_JOU or on Facebook.

After Outcry, UN WHO Rescinds Honors for Genocidal Tyrant Mugabe

UN WHO and Feds Plan to Fight Ebola With Tyranny