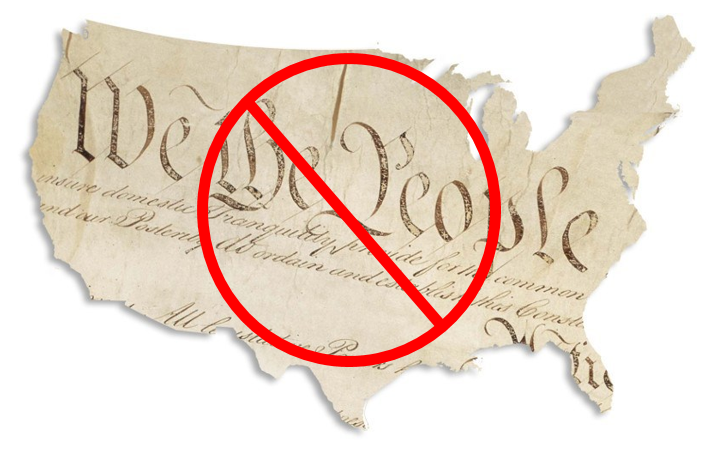 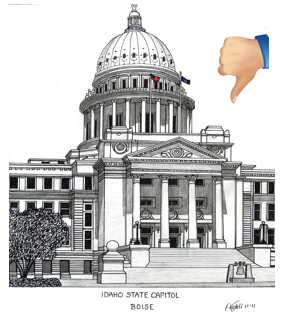 There is no way in today’s political climate that a Convention of the States (COS), Balanced Budget Amendment (BBA) or Wolf Pack, Article V Constitutional Conventions’ (Con-Con) delegates would send new amendments to all of the state legislatures for three-quarters of them to ratify.  Look at how much infighting and stagnation exists in our US Congress and in statehouses across the nation today.  Then recognize that a tremendous amount of even more heightened infighting must happen simultaneously in all 50 states in order to satisfy nullification’s requirement that 38 of them would vote favorably.

That will not happen.  Because instead, a much safer and simpler method is available to the convention’s delegates in Article V.  A special ‘Ratifying Convention’ of select, like-minded delegates would be ‘made to order’ and is identified in Article V right after the word or. 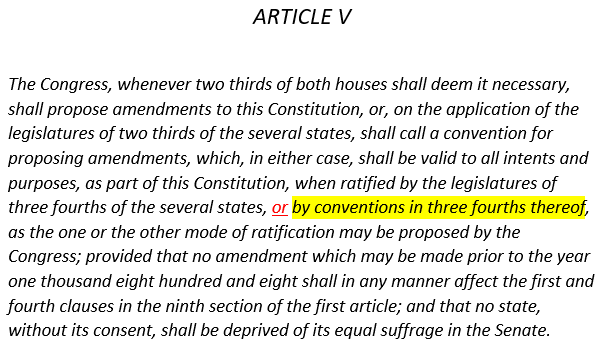 Proponents of an Article V Constitutional Convention strongly assure us that the process is extremely safe because 38 state legislatures have to ratify them before they go to the president for signing into law.  They want us to believe that. They would rather us not be aware of the alternative after the word or.  Ratifying conventions.  They will try to downplay it when confronted.  But if you use the common sense God gave you, what way do you think they would go?

Regular amendments passed by the US Congress have a tough enough time getting ratified in state legislatures.  There also are actually 6 amendments that have been passed by Congress that have not yet been ratified which were proposed from 1789 to 1978.  Following is a list of existing amendments and their ratifications compiled by usconstitution.net.

HERE’S WHY A CON-CON WOULD USE SPECIAL RATIFYING CONVENTIONS

Who knows how complex resulting amendments would be?  Or, how many amendments would come out of a convention or even if our Constitution itself would survive?  Twice before, our 1787 Constitutional Convention and Amendment 21’s repealing of Prohibition, special ‘Ratifying Conventions’ were used instead of state legislatures.  Why?

Our sage founders who knew tyranny first hand and, as realists of their day, knew the 13 colonies would not ratify, instead, they used Ratifying Conventions in 9 states.  Also, repealing Prohibition would not have happened in state legislatures like Utah, so following Article V’s or, ‘by conventions…,’ ratifying conventions were used.

There are many well-funded calls for a Con-Con: Convention of the States (COS), Article V Caucus (of state legislators), American Legislative Exchange Council (ALEC), Balanced Budget Amendment Task Force, and Compact for America. Listed along with these conservative groups have been progressive liberal organizations, such as Convention USA, Amend America, ArticleV.org (“the Inter-Occupy Article V Work Group”), Call a Convention, and Wolf-PAC. These groups claim to favor only a “limited” convention to propose one amendment or a few limited amendments.

JW Malloy of Post Falls, ID:  Quoting James Madison speaking in 1788, “An Article V convention would no doubt contain individuals of insidious views, who, under the mask of seeking alterations popular in some parts … might have the dangerous opportunity of sapping the very foundations of the fabric [of the Constitution].  Popular alterations might ostensibly balance the budget, limit terms, define marriage, or ban flag-burning. Individuals of insidious views need just one popular cause with which to con us into trusting them.”  But in 1990, asked specifically whether a Con-Con could be limited to a single issue, Judge Robert Bork, former Solicitor General, acting Attorney General, and judge for the United States Court of Appeals for the D.C. Circuit responded, “…I do not see how a convention could be limited to one topic once it had been called.’” 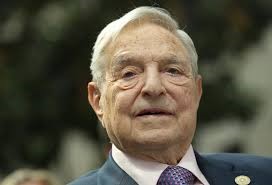 The power driven globalist forces, such as George Soros, behind the funding of all these many diverse calls for a Con-Con would not risk to chance the complexities of state legislature ratifications with committees, legal research, filibustering, gerrymandering, endless debate and prioritization that could render results being extremely difficult to achieve in any timely fashion.  Then multiply those activities times 50 just to get 38!  No.  They would wisely choose, like the two instances before, to use a ratifying convention that would assuredly be comprised of baggage carrying special interests delegates who would be hand selected to do the convention’s bidding.  Some might say these delegates would be very well paid, extremely loyal, all-in, single-minded, baggage carrying knuckle-dragging turncoat maggots.  But I wouldn’t say that because it sounds a little undignified.  They are power mongers, money hungry idiots, socialists or deluded neo-cons.

THE REALITY OF THE CONVENTION’S CAPABILITIES

Quoting Christian Gomez of the New American magazine, “Well-meaning conservatives who advocate for a constitutional convention fail to recognize that once Congress convenes a convention it cannot be undone and no predetermined rules or limitations, adopted by either Congress or the states, will have any bearing on what the convention delegates may choose to do or propose. As the representatives of the sovereign will of the people-at-large in each state, convention delegates would have free latitude to propose any changes they see fit, including the writing of an entirely new constitution, along with changes to the mode of ratification, so as to guarantee the adoption of their amendments. This scenario is known as a “runaway” convention, and it is not without historical precedent.

”Both of these mandates were clearly exceeded. The delegates chose to replace the Articles with an entirely new federal constitution. They also altered the mode of ratification from being ‘confirmed by the legislatures of every State,’ in Article XIII of the AOC, to “the legislatures of three fourths of the several states, or by conventions in three fourths thereof,” in Article V of the new Constitution. (Emphasis added.)”

REALLY, ALL THAT COUNTS IS UNDERSTANDING JUST ONE THING: 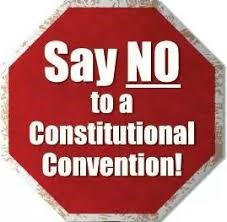 Why should anybody believe that laws from new amendments would magically be followed any more than current law?  All these righteous sounding pitches by well-funded professional poker faced LOBBYI$T$ promising panacea if we open the door to a Con-Con is a clandestine front for very nefarious forces to get control of our government.  Nothing less than our freedoms, sovereignty, and our grandchildren’s’ future are at stake.

THE SOLUTION TO OUR PROBLEM

The solution to the problem of the federal government’s consolidation of power and accumulation of crushing debt does not lie in the changing of the Constitution, but in the consistent application of its enumerated powers and the  adherence to existing law, its enforcement and prosecution of violations.  That is all we need.  Then we begin administering the 10th Amendment which is about nullifying existing laws that are unconstitutional.

If states are so disgusted with the ineptness of the US Congress and are unable to comply with their mandates, then remembering my Green Bay Packers hero, Aaron Rodgers saying R-E-L-A-X, we might say the word of the day should be to N-U-L-L-I-F-Y!  The states should quit whining and cow-towing and man-up.  I repeat, nullification should be the order of the day.  Idaho’s legislature and former Governor Otter knew how to nullify.  But does Governor Little have the wisdom and courage to do that hard work that needs doing?

Don’t listen to what LOBBYI$T say.  Just follow our U.S. and State Constitutions and deal with them.

Review: A Crash Course on a Constitutional Convention (Video)

Change It or Obey It? — Why the Constitution is the Solution (Video)