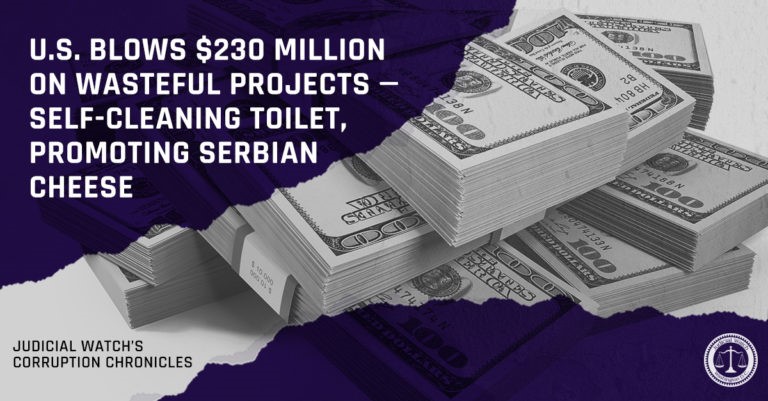 Although the year is not quite over the federal government has already managed to blow more than $230 million on outrageous things such as a self-cleaning toilet, the statue of a popular folk-rock singer for a foreign embassy and dubious research on the effects of nicotine on fish. The list goes on and the sordid details are provided in a “Waste Report,” published recently by the office of a U.S. Senator who chairs the spending subcommittee of the Senate’s chief investigative and oversight committee. The document takes a closer look at what the federal government is doing with the American people’s hard-earned money, according to the lawmaker, Kentucky Republican Rand Paul.

The toilet may sound like a joke, but it’s a serious boondoggle that has fleeced taxpayers out of at least half a million dollars. The self-cleaning toilet is located at the Huntington Metro Station in Washington D.C. and sits inside what appears to be a silver shed. From 2003 to 2017, the government spent approximately $500,000 maintaining the single self-cleaning toilet, the waste report states. The price tag is likely much higher because maintenance invoices for 2007, 2012, 2013 and 2014 have been conveniently lost. The inspector general of the famously inept Washington Metropolitan Area Transit Authority (Metro) has referred to the toilet scandal as “Operation Golden Potty.” Nevertheless, Congress keeps writing the checks, with an estimated $153 million scheduled to go to Metro in 2020 despite its well-documented transgressions.

The government also spent $84,375 to buy a statue of music icon Bob Dylan for the U.S. Embassy in Mozambique, which means the State Department doled out the money. The waste report points out that the State Department already has a generous art allowance for all its construction projects. The agency also operates a special program called Art in Embassies that places donated American art in diplomatic outposts worldwide to showcase U.S. culture. “With hits like Mr. Tambourine Man, Blowin’ in the Wind, and Knockin’ on Heaven’s Door there can be no denying Bob Dylan is a musical icon,” the report says. “But do his musical accomplishments justify the State Department choosing to buy an original Bob Dylan sculpture, for $84,375.61 to place in its embassy in Mozambique?” Probably not.

The Bob Dylan statue is a drop in the bucket compared to some of the other highly questionable projects funded this year. Textbooks for Afghan students cost nearly $34 million and improving the quality of education in Egypt $16 million. Many of the 595,000 books shipped to Afghanistan by the U.S. are sitting in warehouses or cannot be used because they are missing pages, are illegible or contain misspellings. The allotment for Egyptian education aims to reform the curricula at the primary level by recruiting better teachers with higher pay. Instead of investing millions in another country’s failing education system, the government should address the “crisis in American education,” the report points out, stating that “before we go telling other countries how to improve their education system, perhaps we should take a closer look at the story here at home.”

The waste hardly ends there. The U.S. spent a whopping $22 million on a project to strengthen the European cheese market as American dairy farmers are hit with a massive, historic cheese surplus that’s expected to exceed a billion pounds. The absurd program focused on bringing Serbian cheese up to international standards by training staff at the Regional Center for Agricultural Development in Sjenica to follow the requirements set by an international governing body. That includes crucial skills such as properly sampling milk products at local farms, calibrating laboratory equipment and advising farmers on improving the safety and quality of their products. The report also lists a $4.6 million study focusing on the connection between drinking alcohol and winding up in the emergency room and $708,466 on the ridiculous fish research. The alcohol probe logically concluded that countries with a high detrimental drinking pattern are at higher risk of injury at a given level of consumption while those with low drinking rates experience lower levels of injury. The fish project took several years and actively addicted zebrafish to nicotine to identify genes affecting vulnerability to addiction by screening certain behaviors.