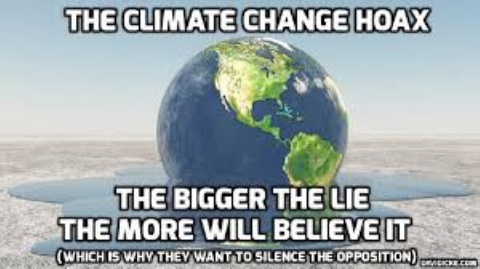 Man-caused Global Warming/Climate Change being caused by excess Carbon Dioxide in the atmosphere is a world-wide HOAX!  Global warming is a major part of the United Nation’s Agenda 21(Sustainable Development) program and plan to REDISTRIBUTE OUR WEALTH AND CONTROL ALL HUMAN ACTIVITY ON THE PLANET!

$360 Billion is being spent each year to promote the fear that global warming will soon destroy the planet and Carbon Dioxide coming from fossil fuels must be greatly restricted; thus, the war on coal, oil and gas.  We must pass H.R. 204 to get the USA out of the Communist controlled, totalitarian United Nations.  It is destroying America!

Carbon Dioxide is not a pollutant as the Supreme Court has ruled, but is necessary for life on the planet.  Carbon Dioxide (CO2) plus water (H2O) during the process of photosynthesis in plants produces the oxygen we need to breathe and the food we eat.  The following are facts concerning the relationship of global warming and CO2 content:

THE HISTORY LEADING TO THE CREATION OF AGENDA 21 BY THE UNITED NATIONS IS AS FOLLOWS:

SURFACE VERSUS SATELLITE TEMPERATURES:  Every year we hear that it was the hottest year on record.  Figures do not lie, but liars figure. Surface readings are greatly influenced by the location of the recording device.  Many are located near buildings, asphalt paving, and concrete so the readings are abnormally high.  Also, many cold regions temperature recordings are not included as in the past.  Thus, the average temperature is artificially higher.

Satellite measurements are much more accurate and for the past 18 years there has been no warming.  If anything, we are in a cooling trend and even the climate alarmists admit that there is “a pause” in global warming.

Volcanoes are a very important source of greenhouse gases and pollutants.  One major volcanic eruption puts out more CO2 and other pollutants in a matter of hours than all of man’s activities for an entire year.  In 1991, Mount Pinatubo erupted which caused the global temperature to decrease 1.3 degrees.

BOTTOM LINE:  Mankind is responsible for only about 1% of the greenhouse effect and contributes nothing to warming!

Patrick Moore, co-founder of Green Peace revealed that saving the environment was only a cover for the real goal of UN’s Agenda 21.  The real goal is power and control by elitist totalitarians who run the United Nations.

Sustainable development is not sustainable!  To lower the standard of living in the US so that we can merge with other third world countries, our energy supplies must be reduced.   The global warming hoax is being implemented in the US mostly by the unscientific EPA.  The war on coal to shut down coal-fired electricity generation is causing power rates to climb drastically. Coal that is not being used in America plan is being shipped to India and China. We now get some of their pollution as no controls on emissions like we have.

While hydro-power generation of electricity is the least expensive, nuclear power is the second least expensive and accounts for about 20% of US electricity.  While many countries of the world continue to expand nuclear power, environmentalists have prevented any new nuclear plants in America for decades.  President Carter stopped breeder reactors which would have contributed much needed inexpensive energy.  Environmentalists have also prevented the development of more much needed refineries of petroleum products.

ETHANOL – It takes more energy to produce ethanol that the energy derived.  The inputs of seed, fertilizer, water, planting, equipment, harvesting and producing the ethanol requires huge amounts of energy. It is unsustainable.

WIND & SOLAR – Without taxpayer subsidies neither is sustainable!  They will never contribute more than 10% of our electrical power needs.  The wind does not blow 24/7 and the sun does not shine 24/7 either.  Wind generators require extensive maintenance and kills hundreds of thousands of migratory birds each year including endangered species.  Solar power is very inefficient.  To meet the output of the 1000 megawatts of electricity produced by the coal fired Fort Bridger, Wyoming and Volney, Nevada plants, it would take 127 square miles of solar panels or 78, 740 football fields filled with solar panels.  Both wind and solar require a 24/7 backup which is provided by natural gas at the present.

THE REAL GOAL OF CLIMATE ALARMIST IS NOT TO SAVE THE ENVIRONMENT.  United Nations co-chairman, Ottmar Edenhofer, of the IPCC working group on Mitigation of Climate Change from 2008-2015 said, “One has to free oneself from the illusion that international climate policy is environmental policy. This has almost nothing to do with environmental policy anymore, with problems such as deforestation or the ozone hole.” So what is the goal of climate change policy?  Edenhofer said, “We redistribute the world’s wealth by climate policy.”

The plan is to allow Third World countries to emit as much carbon dioxide as they wish because as Edenhofer said, “In order to get rich one has to burn coal, oil or gas while at the same time restricting emissions in advanced nations.  This will, of course, choke economic growth in develop nations, but they deserve that fate as they have basically expropriated the atmosphere of the world community.”

SUMMARY:  Carbon Dioxide is not causing global warming/climate change.  Climate cycles, mainly due to sun activity, result in periods of warm and cold weather.  Temperature causes CO2 to rise. CO2 does not cause temperature to rise.  United Nation’s Intergovernmental Panel on Climate Change scientists have been caught changing temperatures in e-mails to fit their global warming agenda.  All 73 IPCC climate models have been proven wrong.  IPCC alarmists admit that the real goal of reducing CO2 is to redistribute the wealth of mainly the USA. There is no real concern for the environment.  Patrick Moore, co-founder of Green Peace said the same. Wind & solar are not sustainable and will never replace coal, oil and gas for electrical power generation. Ethanol uses more energy to produce than it provides.  The UN’s Agenda 21 Sustainable Development is a plan to redistribute our wealth to third world countries and exercise power and control over developed nations to destroy their economies.

SOLUTIONS: Expose the global warming hoax!  Get out of the Communist controlled, tyrannical United Nations by passing H.R. 204.

Stop funding the United Nations; Stop allowing radical environmental propaganda into our schools; Stop funding the unscientific EPA which is implementing Agenda 21’s war on coal & expose the Agenda 21 plans at the state and local level. The United Nation’s Agenda 21 to control all human activity is incompatible with liberty and freedom. It must be exposed & stopped!