Is AG Barr another Jeff Sessions? 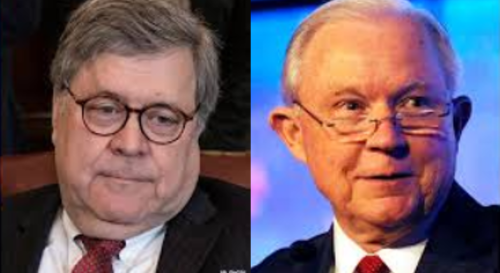 Is AG Barr another Jeff Sessions?

A couple favorite aphorisms of mine are: ‘Talk walks’ and ‘Don’t confuse activity with results.’

President Trump hailed the arrival of William Barr as our new Attorney General, but if we call up our memory so did he herald the appointment of his first AG, Jeff Sessions, as a stalwart performer.

Since Sessions’ dismal, lack of results, there has been heightened expectations of Barr, the man with real pedigree as a former AG under George HW Busch.  Never mind Barr is personal friends with Robert Mueller, their wives attending bible study together, and that he has numerous other deep state acquaintances.  Trump is sold on him and hypes him as needed.

Being an all-in Trumper who understands that no one is perfect, I say Trump should replace his all-in expectations for Barr with some demands for a ton of results almost immediately.  I’m not being impatient, but it’s time we should be thrown some fish.

The myriad list of what appears to be ‘Teflon’ Democrats, those with documented violations of law and our Constitution that are prosecutable, is so long it validates that there are two sets of laws in America.  And that doesn’t even consider that Obama’s legacy of corruption may never be matched. See to believe: Obama’s trying to salvage a Legacy… No Problem, He’s Got One He Can’t Run From –the breadth of his corruption should not get a pass because he was President.

During Barr’s six month tenure, so far, he has allowed Rod Rosenstein to slither away in the night with no charges and James Comey to evade charges as C. Mitchell Shaw says, in his article “Lying, Leaking” James Comey Dodges Prosecution, but IG Report Does Not Exonerate Him”.

As Larry Klayman says “Indeed, what is a guy to do when he sits over a U.S. Department of Justice so compromised that it cannot even decide whether to indict former Deputy FBI Director Andrew McCabe and twice in the last few weeks passed – that is took a dive – on prosecuting the former FBI Director himself James Comey – despite two strong referrals to do so by the department’s inspector general?”

There are so many prosecutable on the record violations of law in the entire Deep State/Russia Gate attempted coup, we should have expected charges and more importantly mass arrests months ago.

Then, of course, every patriotic American I know cannot believe the Clintons have gotten away with so many crimes.  In fact, before Hillary’s blatant violations of law like her emails and she and Bill’s selling 20% of our national uranium inventory to the Russians for millions, the Clintons already had committed more outright treason than for which the Rosenbergs were executed.

There is so much to prosecute it’s overwhelming and utterly sickening. 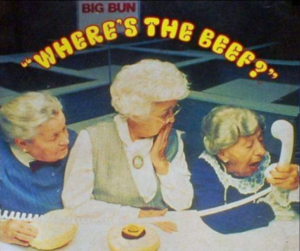 People I know want to believe that Trump has Barr compiling cases for a major coming down like a Friday night massacre all at one time. Sending in the marshal service or military to confiscate documents, make arrests, preferably cuffing main violators on video for impactful effect, would be a dream come true.  However, I believe that would be hard to keep under wraps.

Wouldn’t it be wonderful to find out that all laws are being enforced regardless of party affiliations?  And, I believe that could only be outdone by the enforcement also of libelous violations by their fake news ‘free press’ complicit comrades. Libelous lies should also be prosecuted.

It’s time for ‘President’ Donald Trump as the top law enforcement officer in America to step up, drop the hammer and ask Barr, “Where’s the beef?”